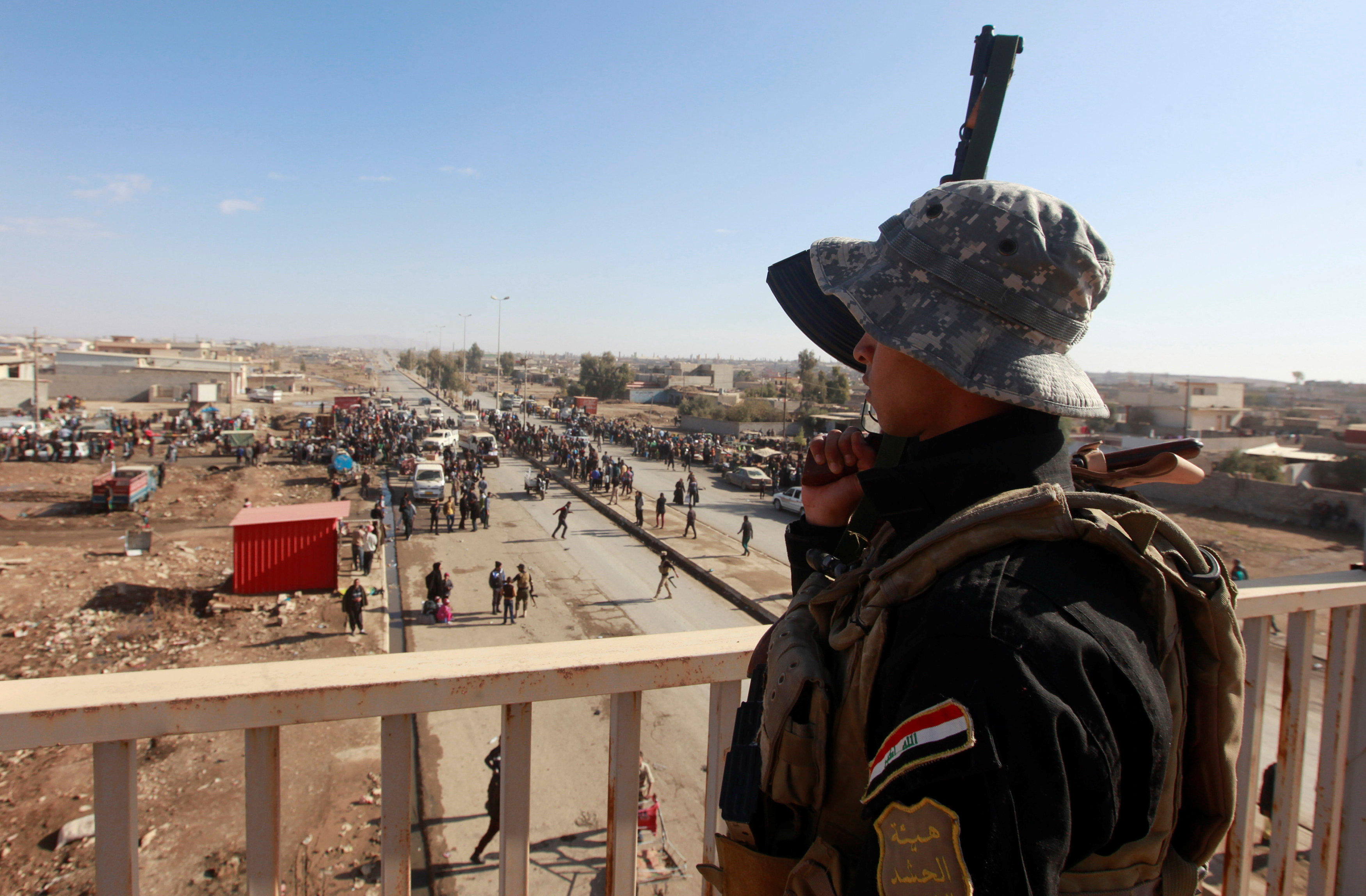 QABR AL-ABD, Iraq -- Under the cover of dust and fog, Islamic State group fighters launched a series of counterattacks on Iraqi positions to the south and west of the militant-held city of Mosul late Friday night and into Saturday morning, according to Iraqi military commanders and officials.

The massive operation to retake Mosul was officially launched on Oct. 17, but after initially swift battlefield successes, the progress of Iraqi forces later slowed down in the face of fierce ISIS counterattacks and concerns over the safety of civilians still inside the city.

ISIS has largely failed to push back Iraqi troops, but its counterattacks have inflicted high casualties on both civilians and security forces alike and, in some cases, shaken morale.

The U.N. reported this week that nearly 2,000 members of the Iraqi forces were killed last month, but after coming under fire from the media arm of the Iraqi military, it announced Saturday it would discontinue publishing casualty figures for Iraq’s security forces.

West of Mosul, one Iraqi official said IS militants breached the defenses of Shiite militiamen at a village outside the northern Iraqi town of Tal Afar, which is west of Mosul. Reached by telephone near Tal Afar, he said the attack on the village of Sharea took place Friday night.

Fighting continued into Saturday, he added, without providing details.

South of Mosul, IS launched attacks on the positions of a tribal militia and a number of Iraqi army positions, according to an Iraqi official and commanders on the ground.

Along the Tigris river valley, IS fighters moved under the cover of heavy mortar fire to attack Iraqi positions outside the villages of al-Qasar and Qabr al-Abd, said Iraqi Army Col. Haider Hatem, explaining that a dust and fog storm in the Mosul area on Friday gave the militants cover to launch the attacks.

“Over four hours, they launched more than 200 mortars,” Hatem said. His men finally suppressed the onslaught in the early hours of Saturday morning, he added.

The two Iraqi officials spoke on condition of anonymity as they were not authorized to brief the media.

The attacks are evidence of the slow pace of the Iraqi advance, which in turn is allowing the militant group time to regroup after suffering battlefield setbacks, according to Iraqi officials. Despite the fierce attacks, IS was unable to retake any territory southeast of Mosul, Col. Hatem said.

“They are just doing this to create another obstacle to our advances, they don’t want to hold the territory,” said Sgt. Maj. Muhammad Sabah, speaking at a position some 6.2 miles south of Mosul’s airport that his unit has held for nearly two weeks.

“We are just waiting here for the order to advance,” he said, “if we had it, we would already be inside Mosul.”

During a visit to frontline positions, Lt. Gen. Abdul-Amir Yarellah, the commander of a joint operations center that oversees the Mosul campaign, said the presence of civilians continues to be the biggest factor slowing advances toward Mosul. Rather than just pushing forward, his men are often forced to pause to deal with humanitarian issues, he said.

Other commanders on the ground have said the lack of sufficient numbers of troops needed to hold territory retaken from ISIS has also contributed to the slow progress.

“You can’t just liberate land, you need to also take care of the people,” Yarellah said.

During his visit Saturday, he said he also met with the U.N. officials to discuss plans to open a hospital in the recently retaken village of Hamam al-Alil.

At the front line just south of the airport, the Iraqi army Sgt. Maj. Sabah said he faces counterattacks every time he pauses. “Almost every night they shoot at us from those same positions,” he said as he pointed across a valley at a row of houses. At a nearby checkpoint, an injured Iraqi solider holding up his own IV drip could be seen being evacuated from the front.

Iraq’s military does not publicize its casualty figures, but the U.N. has released monthly casualty figures for both civilians and security forces almost every month for years since the U.S.-led invasion of Iraq in 2003 unleashed a deadly insurgency.

However, after criticism from the Iraqi government, the U.N. in Iraq acknowledged in a statement Saturday that its figures on military casualties were “largely” unverified and that it would discontinue their publication “unless sound methodology of verification can be found to better substantiate the figures being reported.”

The Iraqi military’s media arm called the figures “not accurate and much exaggerated.”