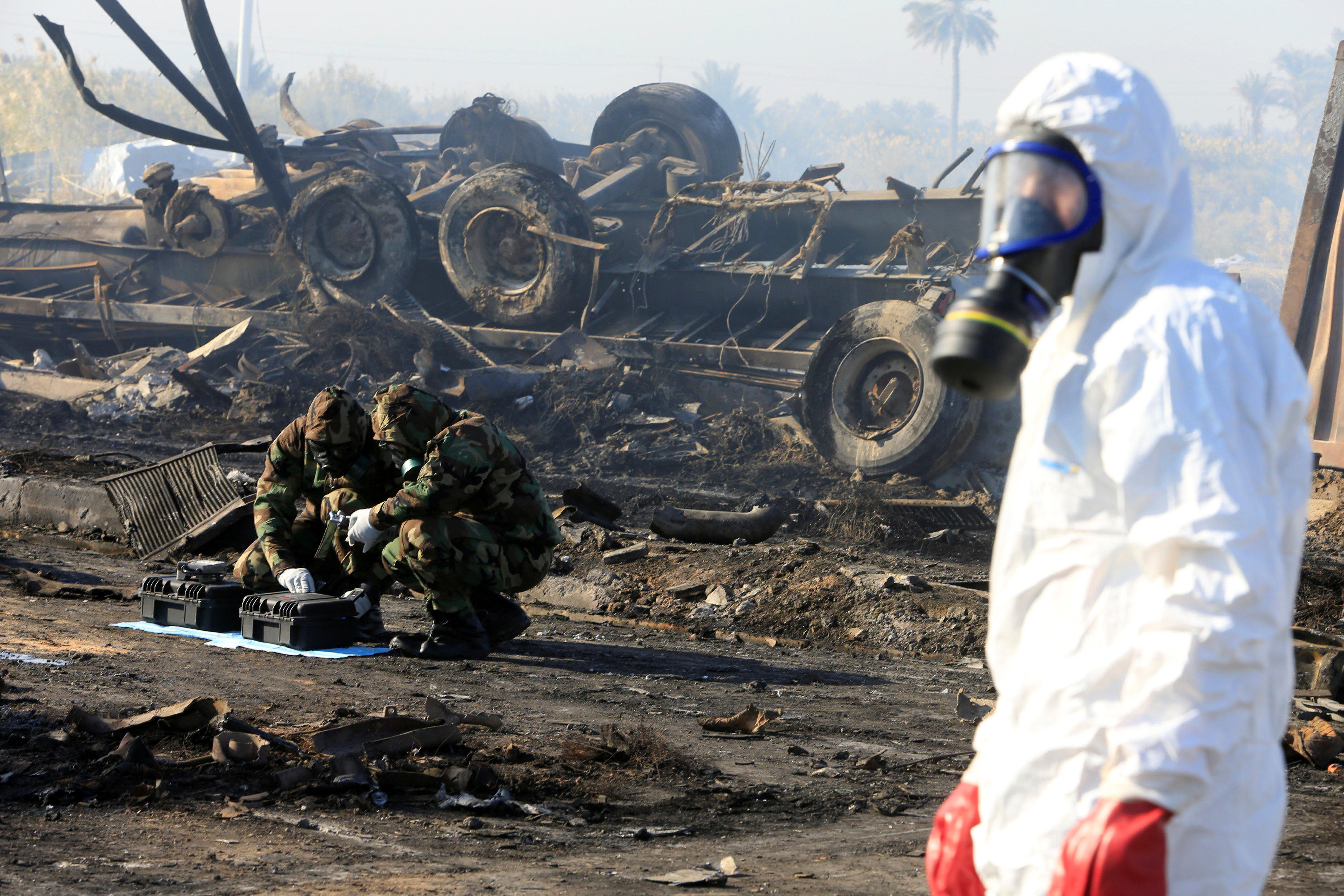 MOSUL, Iraq -- The death toll from a car bombing south of Baghdad claimed by the Islamic State of Iraq and Syria, or ISIS, rose to 73 on Friday, including about 40 Iranian pilgrims, as Iraqi forces continued to inch closer to the center of the northern city of Mosul in street-to-street fighting east of the Tigris River.

Iraqi police and hospital officials said 65 other people were wounded in the Thursday night attack at a gas station on a major highway near the city of Hilla, about 60 miles south of the Iraqi capital.

It was the deadliest ISIS attack in Iraq since July, when a car bomb killed about 300 in a commercial district in Baghdad.

ISIS claimed the attack in a brief statement on its Aamaq media arm, saying it was a suicide truck bomb. Earlier, Iraqi officials, who spoke to The Associated Press on condition of anonymity because they were not authorized to talk to the media, had put the death toll at 56.

The attack appears to have targeted a bus with Iranian pilgrims heading home after a major Shiite religious observance in the holy city of Karbala.

Iran’s Deputy Foreign Minister Hassan Qashqavi was quoted by the semi-official Tasnim news agency on Thursday night as saying that 80 people were killed, including 40 Iranians. Conflicting death tolls are common in the aftermath of large attacks.

The attack came a day after some dozen small-scale bombings in and around Baghdad killed 31 people and wounded more than a 100 - a particularly bloody day even by the standards of the Iraqi capital, which has for more than a decade endured near-daily violence blamed on ISIS or its forerunner, al Qaeda in Iraq, and which mostly targeted members of Iraq’s Shiite majority.

The gas station bombing underlined the continuing ability of ISIS to stage high-profile terror attacks even as a massive Iraqi military operation is underway to dislodge its fighters from Mosul, its last major urban stronghold in Iraq. The offensive is aided by volunteer militiamen and the U.S.-led coalition, which has mostly been pounding ISIS targets in Mosul with airstrikes.

Moreover, Thursday’s ISIS bombing took place in Iraq’s Shiite hinterland south of Baghdad, a region that has largely been spared the near-daily violence that has for years engulfed the capital and Sunni regions.

Earlier this week, Prime Minister Haider al-Abadi visited Karbala, where he lavishly praised the country’s security forces for protecting the pilgrims against attacks by ISIS.

Extremist Sunni militants, including ISIS, view Shiites as heretics and routinely target Iranian pilgrims who visit Iraq by the hundreds of thousands to pay homage to major Shiite shrines in Baghdad, and also the Shiite holy cities of Karbala and Najaf, south of Baghdad, and Samarra, to the north of the capital.

Shiite Iran is a major backer of the governments in Iraq and neighboring Syria in their fight against ISIS, providing military advisers and weapons.

“Let the vile Rafidha (Shiites) know that what awaits them in the near future, God willing, will be more painful and bitter and that the flames of the battles in Nineveh will reach them in Baghdad, Karbala and Najaf,” ISIS said in its statement. Nineveh is the northern Iraqi province where Mosul is the capital.

The Shiite observance in Karbala, called the al-Arbaeen, routinely attracts hundreds of thousands of pilgrims, including many Iranians who travel overland into Iraq for the occasion. Several members of Iranian civil defense staff who had been in Karbala to offer assistance to Iranian pilgrims rushed to the gas station following the bombing, helping their Iraqi counterparts collect victims’ bodies and aiding the wounded. Iranian civil defense personnel typically accompany pilgrims on such trips to Iraq.

The Iraqi government’s campaign to retake Mosul began last month, but stiff ISIS resistance and concerns over the safety of civilians who remain inside the city have slowed the Iraqi forces’ progress.

Fighting continued in the eastern sector of Mosul on Friday, with Iraqi special forces seizing another neighborhood, Masaref, and advancing in the densely populated Zohour district, according to Brig. Gen. Haider Fadhil. The offensive to capture Zohour began earlier this week, but troops are facing stiff ISIS resistance, he added.

On the ground in Mosul, the sound of automatic fire and the thud of mortar shells and artillery shook the city’s eastern sector, east of the Tigris River, on Friday.

An Associated Press team in the area said civilians fleeing the fighting continued to flow out of the inner parts of the city toward the lines of the Iraqi military. Off the back of a truck, soldiers offered them rice, potatoes and tomato sauce. In the Bakr neighborhood, civilians lined the streets. Old and young men looked on silently, while children smiled and waved to the troops.