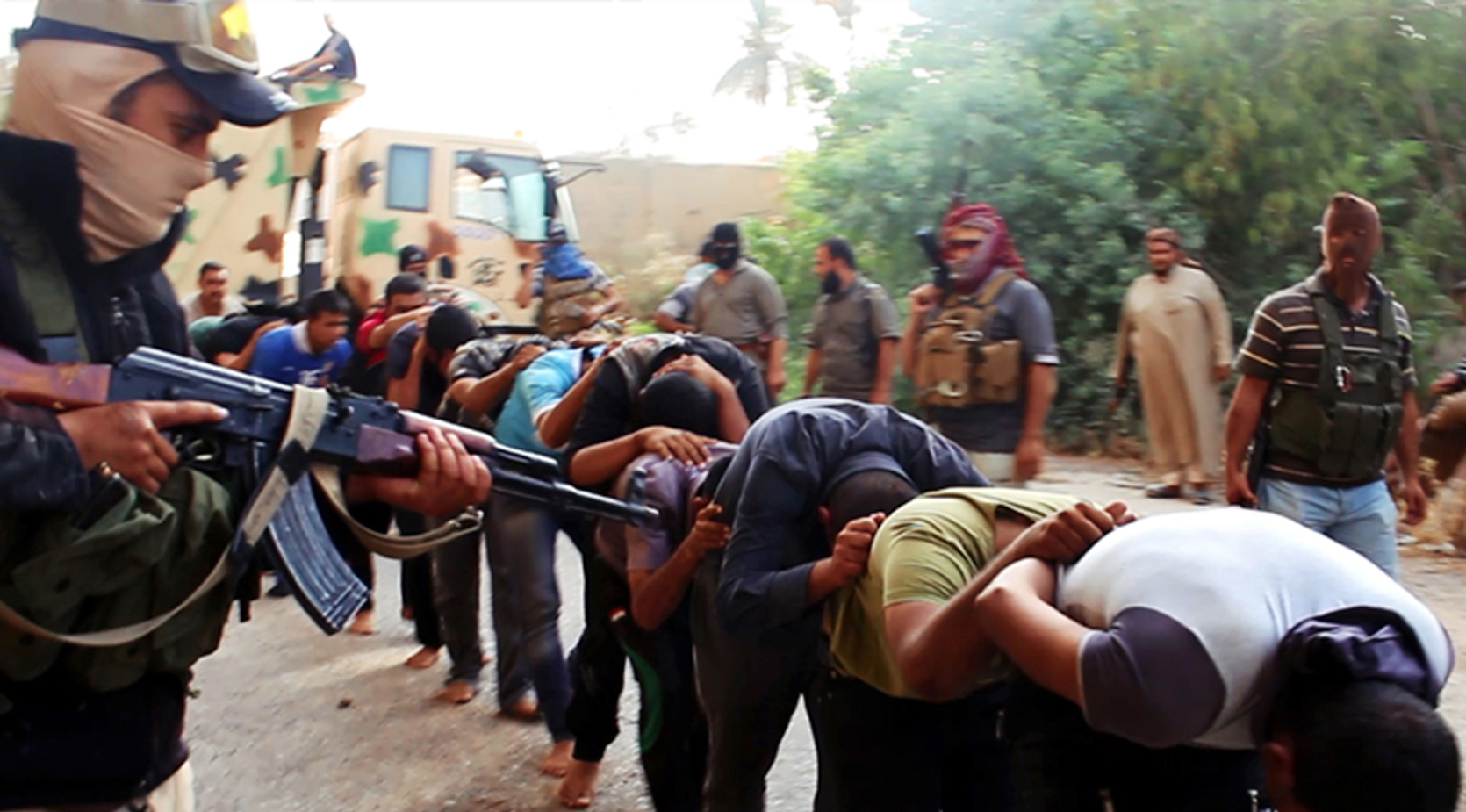 BAGHDAD -- Militants from the Islamic State of Iraq and Syria (ISIS) carried out a mass killing of hundreds of Iraqi prison inmates when they seized the country's second-largest city of Mosul in June, an international rights group said on Thursday.

Some 600 male Shiite inmates from Badoosh prison outside Mosul were forced to kneel along the edge of a nearby ravine and shot with automatic weapons, Human Rights Watch said in a statement based on interviews with 15 Shiite prisoners who survived the massacre.

The New York-based watchdog added that the Shiite prisoners were separated from several hundred Sunnis and a small number of Christians who were later set free. A number of Kurdish and Yazidi inmates were also killed, they said.

The prisoners had been serving sentences for a range of crimes, from murder and assault to nonviolent offenses.

Before separating them, the gunmen herded up to 1,500 inmates onto trucks and drove them to an isolated stretch of desert about two kilometers from the prison, the survivors said. After taking several hundred away in trucks, they forced the Shiites to form one long line along the ravine edge and then count their number in the line before showering them with machine-gun fire.

"A bullet hit my head and I fell to the ground, and that's when I felt another bullet hit my arm," one survivor said. "I was unconscious for about 5 minutes. One person was shot in the head, in the forehead, it (the bullet) went out the other side, and he fell on top of me," the statement quoted him as saying.

Before the shooting started, he added, he kissed the men on each side "because we knew we were going to die" and "after we said goodbye to each other, I took my daughter's picture and kissed it, and I prayed to God to save me for her, because I have no one else."

Between 30 to 40 prisoners survived, most by rolling into the valley and pretending to be dead, or from being shielded by the bodies of other prisoners, they said. Several wounded men died while trying to crawl or stagger away.

Then the gunmen set fire around the ravine and flames spread to the corpses. HRW withheld the names of the survivors to protect them from possible retaliation.

"The gruesome details of ISIS' mass murder of prison inmates make it impossible to deny the depravity of this extremist group," HRW's senior terrorism and counterterrorism researcher, Letta Tayler said. "People of every ethnicity and creed should condemn these horrific tactics, and press Iraqi and international authorities to bring those responsible to justice," Tyler added.

Also in June, ISIS claimed it had "executed" about 1,700 soldiers and military personnel captured from Camp Speicher outside Tikrit city.

The onslaught by ISIS has stunned Iraqi security forces and the military, which melted away and withdrew as the extremists advanced, capturing key cities and towns. The militants also targeted Iraq's indigenous religious minorities, including Christians and followers of the ancient Yazidi faith, forcing tens of thousands from their homes.

Since then, the Islamic State has carved out a self-styled caliphate in the large area straddling the Iraqi-Syrian border that it now controls.

CBS News correspondent Holly Williams reported that a new video shows how brutally ISIS treats women. In the ISIS Internet video, a young Syrian woman accused of adultery pleads for forgiveness. The video shows the stones battering the young woman, but not the moment of her death.

In early August, the United States launched airstrikes on the militant group in Iraq, in an effort to help the Iraqi forces fight back against the growing militant threat.