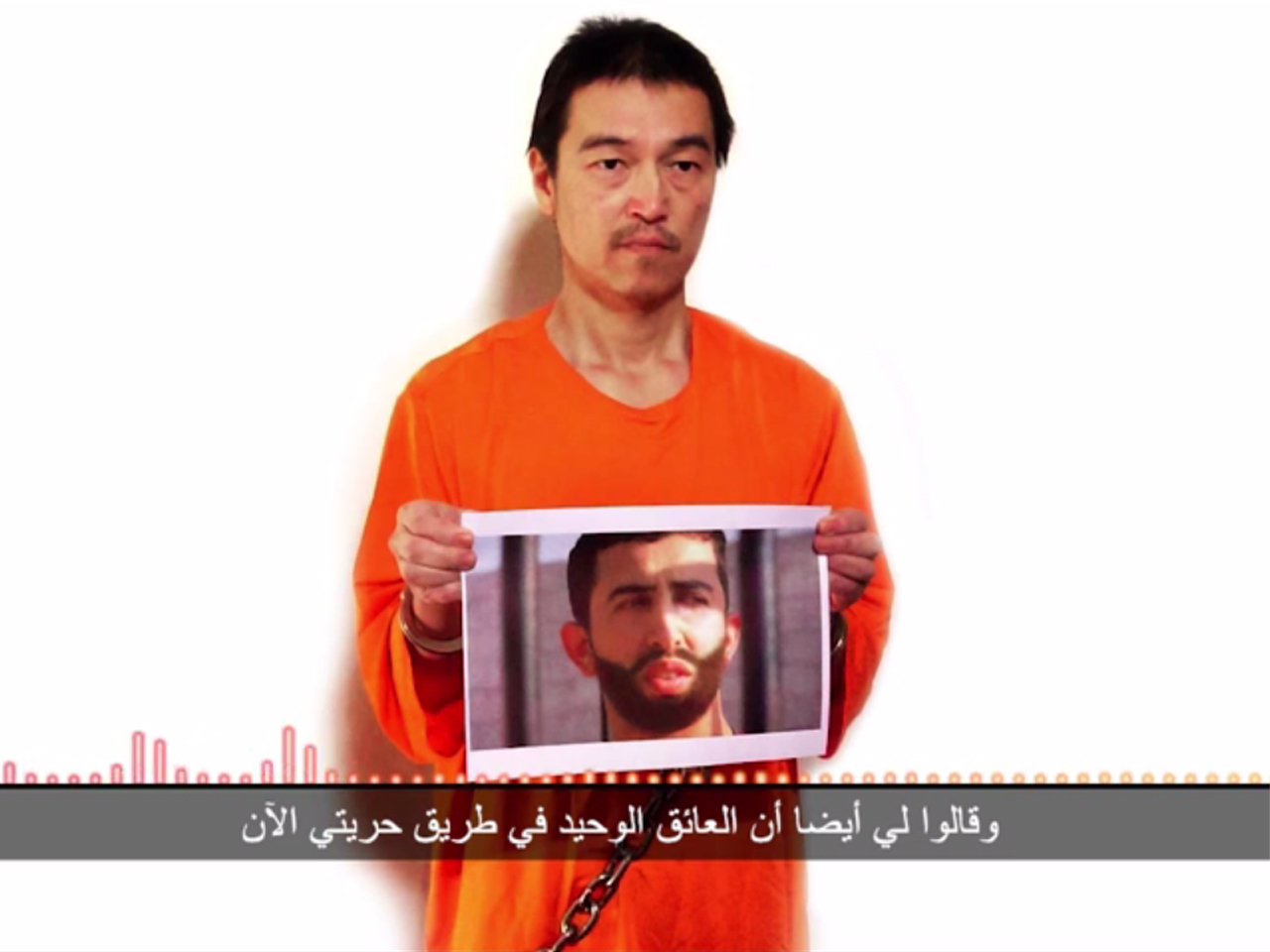 As the deadline set by the Islamic State of Iraq and Syria (ISIS) for Jordan to release a failed female suicide bomber from prison passed, the wife of a Japanese journalist held by the militant group made her first public appeal for the Jordanian government to do all it could to win his release.

"In the past 20 hours the kidnappers have sent me what appears to be their latest and final demand," said hostage Kenji Goto's wife, Rinko, in an audio and print statement.

She said ISIS militants, which whom she has communicated via email for some time, ordered her to spread their message that if Jordan failed to free would-be al Qaeda suicide bomber Sajida al-Rishawi by Thursday at sundown, they would execute a Jordanian air force pilot "immediately," and "Kenji will be next."

"I fear that this is the last chance for my husband and we now have only a few hours left to secure his release and the life of Lt. Mu'ath al-Kaseasbeh," said Rinko, referring to the Jordanian pilot. "I beg the Jordanian and Japanese Government to understand that the fates of both men are in their hands."

Goto "was taken from me on 25 October 2014, and since then I have been working tirelessly behind the scenes for his release," said Rinko in her statement, explaining that she had remained silent "to protect my children and family from the media attention Kenji's plight has created around the world."

"My husband and I have two very young daughters. Our baby girl was only three weeks old when Kenji left. I hope our oldest daughter, who is just two, will get to see her father again. I want them both to grow up knowing their father.   My husband is a good and honest man who went to Syria to show the plight of those who suffer," the hostage's wife said.

Rinko's plea came on the heels of a statement from the Jordanian government, calling on the militant group to prove they could even hold up their end of the bargain.

"We want to make sure that the pilot is still alive before we fulfill our commitment to exchange Rishawi for the pilot," spokesman Mohammed al-Momani told the Jordanian government news agency.

Japan said earlier Thursday that it was putting its trust in Jordan to help gain the release of journalist Kenji Goto, held by the ISIS militants, after the latest message purportedly from his captors extended until sundown in the Middle East the deadline for the Jordanians to release Rishawi.

The message, read in English by a voice the Japanese government said was likely that of Goto, was released online late Wednesday after Jordan offered to hand over Rishawi in exchange for Kaseasbeh.

The recording said Jordan must present Rishawi, an Iraqi woman convicted of involvement in the deadly Amman hotel bombings in 2005, at the Turkish border by sunset Thursday, in exchange for Goto's life or the pilot would be killed. It wasn't clear what Goto's fate would be if the woman wasn't returned.

The message clearly stated the deadline was sundown in Mosul, Iraq, the largest city held by the militant group.

The authenticity of the recording could not be independently verified, but it was distributed on social media accounts linked to ISIS.

In Tokyo, government spokesman Yoshihide Suga said Thursday the government was in close communications with the Jordan government. He said Japan was doing its utmost to free Goto, working with nations in the region, including Turkey, Jordan and Israel.

"As the situation is developing, I shouldn't comment on details. But, Japan and Jordan are dealing with the matter based on an extremely trusting relationship," Suga told reporters.

Al-Momani reiterated that sentiment Thursday, saying Jordan was "in constant contact and coordination with Japanese friends to coordinate efforts to secure the Japanese hostage as well."

Efforts to free al-Kaseasbeh and Goto gained urgency after a purported online ultimatum claimed Tuesday that ISIS would kill both hostages within 24 hours if Jordan did not free al-Rishawi.

Japan has scrambled to deal with the crisis that began last week with the release of a video by the Islamic State group showing Goto and another Japanese hostage, Haruna Yukawa, kneeling in orange jumpsuits between a masked man who threatened to kill them within 72 hours unless Japan paid a $200 million ransom.

That demand has since shifted to one for the release of al-Rishawi. The militants claim to have killed Yukawa, 42, although that has not been confirmed.

Goto, a freelance journalist, was captured in October in Syria, apparently while trying to rescue Yukawa, who was taken hostage last summer.

In Tokyo, Goto's mother, Junko Ishido, has been desperately pleading for the government to save her son.

"I know Mr. Abe is someone who can handle this matter. I trust Mr. Abe and I can do nothing but rely on him," she said.

But as D'Agata notes, that was never even part of the deal, as far as ISIS is concerned. The militant group has only said the pilot's life would be spared, not that he might be freed. And ISIS has ignored for days Jordan's demands to prove the pilot is still, in fact, even alive.

In his announcement that Jordan is ready to trade al-Rishawi for the pilot, government spokesman Mohammed al-Momani made no mention of Goto.

Releasing the would-be hotel bomber linked to al Qaeda would breach Jordan's usual hard-line approach to the extremists and set a precedent for negotiating with them.

It would also be a coup for ISIS, which has already overrun large parts of neighboring Syria and Iraq. Jordan is part of a U.S.-led military alliance that has carried out airstrikes against the extremist group in Syria and Iraq in recent months.

ISIS has not publicly demanded prisoner releases before and Jordan's main ally, the United States, opposes negotiations with extremists.

The pilot's capture has hardened popular opposition among Jordanians to the airstrikes, analysts said.

"Public opinion in Jordan is putting huge pressure on the government to negotiate with the Islamic State group," said Marwan Shehadeh, a scholar with ties to ultra-conservative Islamic groups in Jordan. "If the government doesn't make a serious effort to release him, the morale of the entire military will deteriorate and the public will lose trust in the political regime."

Jordan reportedly is holding indirect talks with the militants through religious and tribal leaders in Iraq to secure the release of the hostages. In his brief statement, al-Momani only said Jordan is willing to swap al-Rishawi for the pilot. He did not say if such an exchange is being arranged.

The 26-year-old pilot, al-Kaseasbeh, was seized after his Jordanian F-16 crashed in December near ISIS' de facto capital of Raqqa in Syria. He is the first foreign military pilot the militants have captured since the coalition began its airstrikes in August.

Previous captives may have been freed in exchange for ransom, although the governments involved have refused to confirm any payments were made.

ISIS broke with al Qaeda's central leadership in 2013 and has clashed with its Syrian branch, but it reveres the global terror network's former Iraqi affiliate, which battled U.S. forces and claimed the 2005 Amman attack.