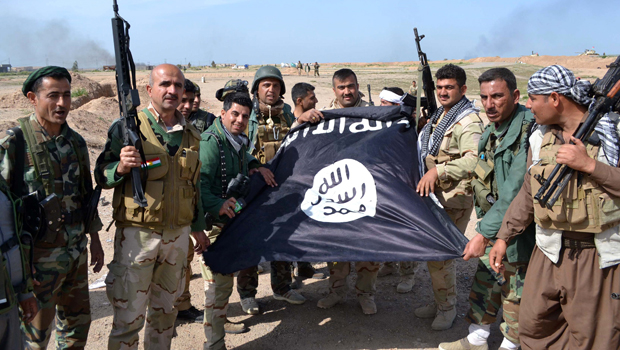 BAGHDAD -- Kurdish authorities in Iraq said Saturday they have evidence that the Islamic State of Iraq and Syria, or ISIS, used chlorine gas as a chemical weapon against peshmerga fighters, the latest alleged atrocity carried out by the extremist organization now under attack in Tikrit.

The allegation by the Kurdistan Region Security Council, stemming from a Jan. 23 suicide truck bomb attack in northern Iraq, did not immediately draw a reaction from ISIS, which holds a third of Iraq and neighboring Syria in its self-declared caliphate. However, Iraqi officials and Kurds fighting in Syria have made similar allegations about the militants using the low-grade chemical weapons against them.

In a statement, the council said the alleged chemical attack took place on a road between Iraq's second-largest city, Mosul, and the Syrian border, as peshmerga forces fought to seize a vital supply line used by the Sunni militants. It said its fighters later found "around 20 gas canisters" that had been loaded onto the truck involved in the attack.

Video provided by the council showed a truck racing down a road, white smoke pouring out of it as it came under heavy fire from peshmerga fighters. It later showed a white, billowing cloud after the truck exploded and the remnants of it scattered across a road.

An official with the Kurdish council told The Associated Press that dozens of peshmerga fighters were treated for "dizziness, nausea, vomiting and general weakness" after the attack. He spoke on condition of anonymity as he was not authorized to discuss the incident.

The Kurds say samples of clothing and soil from the site were analyzed by an unnamed lab in an unnamed coalition partner nation, which found chlorine traces.

"The fact ISIS relies on such tactics demonstrates it has lost the initiative and is resorting to desperate measures," the Kurdish government said in the statement.

ISIS fighters are being pushed back from towns and cities they captured in Iraq, according to the Pentagon.

CBS News correspondent Holly Williams reports from Baghdad that ISIS has clearly been weakened by more than 2,800 U.S.-led airstrikes against the Sunni militant group in Iraq and Syria.

U.S. officials said more than 8,000 ISIS fighters have been killed by the strikes. Local commanders in Iraq tell CBS News many of the group's most experienced men have been killed.

There was no independent confirmation of the Kurds' claim. Peter Sawczak, a spokesman for the Organization for the Prohibition of Chemical Weapons, which has monitored Syria dismantling its chemical weapons stockpile, said his group had not been asked to investigate the attack.

Alistair Baskey, a spokesman for the White House's National Security Council, said American officials were aware of the Kurds' claim, though they had no information "regarding its veracity at this time."

"We find such allegations deeply disturbing, and if there are parties engaged in such use, they should be held appropriately accountable," Baskey said.

Chlorine, an industrial chemical, was first introduced as a chemical weapon at Ypres in World War I with disastrous effects as gas masks were not widely available at the time. While chlorine has many industrial and public uses, as a weapon it chokes victims to death.

In the Syrian civil war, a chlorine gas attack on the outskirts of Damascus in 2013 killed hundreds and nearly drove the U.S. to launch airstrikes against the government of embattled President Bashar Assad. The U.S. and Western allies accused Assad's government of being responsible for that attack, while Damascus blamed rebels.

There have been several allegations that ISIS has used chlorine as well. In October, Iraqi officials claimed ISIS militants may have used chlorine-filled cylinders during clashes in late September in the towns of Balad and Duluiya. Their disclosures came as reports from the Syrian border town of Kobani indicated that the extremist group added chlorine to an arsenal that already includes heavy weapons and tanks looted from captured military bases.

Meanwhile Saturday, Iraqi security forces engaged in fierce clashes with the militants as they continued their offensive to retake Saddam Hussein's hometown, Tikrit.

Iraqi forces, which include the military, police, Shiite militias and Sunni tribesmen, entered the city of Tikrit for the first time Thursday, gaining control of neighborhoods on its northern and southern ends.

Militia commander Hadi al-Amiri has said security forces will hold their position until the area is cleared of any remaining civilians. He estimated on Friday that Iraqi forces would reach the center of Tikrit within two to three days.