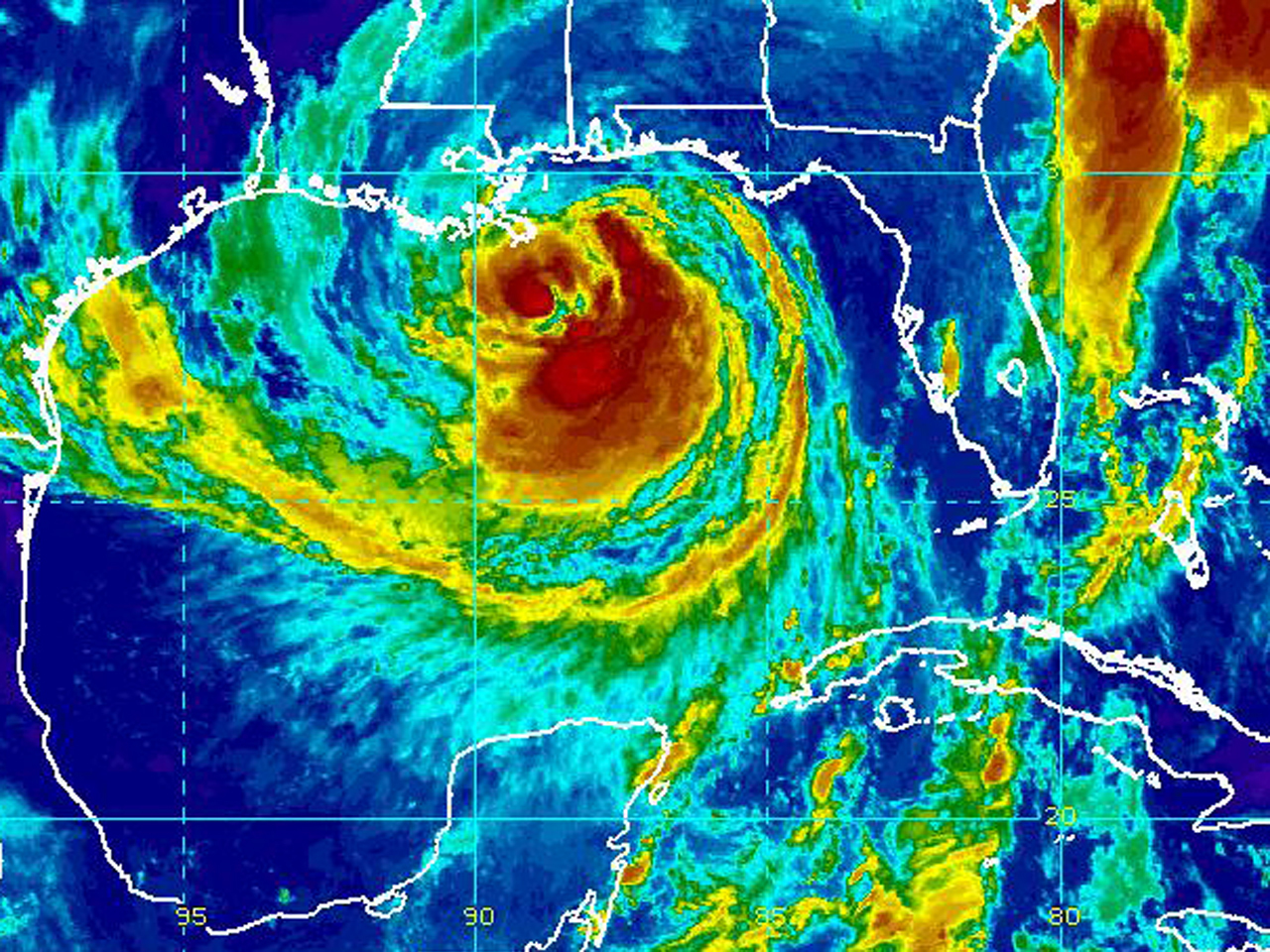 (CBS/AP) CHAUVIN, La. - Isaac was on the verge of ballooning into a hurricane Tuesday that could flood the coasts of four states with storm surge and heavy rains on its way to New Orleans, where residents hunkered down behind levies fortified after Katrina struck seven years ago this week.

Shelters were open for those who chose to stay or missed the chance to get away before the outer bands of the large storm blow ashore ahead of a forecast landfall in southeast Louisiana on Tuesday night or early Wednesday.

Forecasters warned that Isaac was a large storm whose effects could reach out 200 miles from its center. Water may be worse than wind because the storm could push walls of water while dumping rain to flood the low-lying coast in Louisiana, Mississippi, Alabama and the Florida Panhandle.

The U.S. National Hurricane Center in Miami predicted Isaac would power up to hurricane strength, which starts at winds of 74 mph, later in the day and be at least a Category 1 hurricane by the time it's expected to reach the swampy coast of southeast Louisiana.

CBS News hurricane consultant David Bernard reports from CBS station WFOR-TV in Miami that some areas hit by Isaac could see as many as 20 inches of rain.

In Washington, President Obama urged Gulf Coast residents to listen to local authorities, saying in brief remarks at the White House that "now is not the time to tempt fate."

Isaac was packing top sustained winds of 70 mph and had not yet reached hurricane strength late Tuesday morning. The storm system was centered about 80 miles south-southeast of the mouth of the Mississippi River at 11 a.m. EDT and was moving northwest at 10 mph, according to the National Hurricane Center in Miami. It was 165 miles southeast of New Orleans.

Isaac's track is forecast to bring it to New Orleans seven years after Katrina hit as a much stronger storm on Aug. 29, 2005.

This time, federal officials say the updated levees around the city are equipped to handle storms stronger than Isaac. The Army Corps of Engineers was given about $14 billion to improve flood defenses, and most of the work has been completed.

In New Orleans, Mayor Mitch Landrieu insists the city is ready, CBS News correspondent Byron Pitts reports. When asked about the comfortable and confident stance people have about the storm - and if that's a good place to be - Landrieu said, "I think what they're comfortable and confident in is that, given the level of this storm, that the levees can hold and we're not gonna have a Katrina event."

Landrieu did not activate a mandatory evacuation Monday. Instead, officials urged residents to hunker down and make do with the supplies they had.

In Cocodrie, La., the biggest concern is the expected storm surge, CBS News correspondent Manuel Bojorquez reports. Two major flood gates meant to protect this coastal community are still under construction. One of them, the Houma Navigation Canal, won't be complete until next hurricane season. Everyone in the area is under a mandatory evacuation notice.

In Biloxi, Miss., CBS News correspondent Mark Strassmann reports Mississippi's construction standards could place some areas in real trouble. The city faces the northeast quadrant of Isaac, potentially the storm's most powerful and punishing side.

One study by the Insurance Institute for Business Home & Safety rated construction standards in 18 hurricane-prone states, from Maine to Texas. Florida scored high, a 95 out of 100; Louisiana, 73. But Alabama scored 18, and Mississippi scored the lowest - 4 out of 100.

CBS News correspondent Rebecca Jarvis reports Isaac could lead to an increase in gas prices between 5 cents and 10 cents in the next week. More than 40 percent of U.S. refineries are along the Gulf Coast, and about half of them are directly in the storm's path.

Many refineries are either shut down or are considering whether to stop production until the storm passes, Jarvis reports. Gas supplies are already 4 percent lower than normal this year because of the closure of six other refineries earlier this month.

"The optics of a split-screen of people in peril over here and people at a convention having fun is something they really don't want to face up to," Schieffer said on "CBS This Morning" Tuesday.

Possibilities include canceling more sessions, which was done on Monday when the storm was near Tampa, or only having Mitt Romney address Americans after being named the party's presidential nominee, Schieffer reports.

Below, watch a NASA/NOAA time lapse video of satellite images taken of Isaac

In Houma, a city southwest of New Orleans, people filled a municipal auditorium-turned-shelter. Simon and Crystal Naquin were there with their teenage sons because the camper they call home sits in a flood-prone spot between a navigation canal and lower Bayou Caillou.

Simon Naquin said he rode out hurricanes when he was younger, but doesn't do that anymore since seeing the damage wrought by hurricanes Andrew, Katrina and Rita.

"Now that I got kids, I've seen too much to say, 'Stay,'" said Naquin, who shared a twin air mattress with his wife while their sons read and snacked on jambalaya amid a pile of blankets and next to a stash of water bottles and food.

With landfall expected near the Katrina anniversary, anxiety was high, especially in New Orleans' Lower 9th Ward, wiped out by Katrina after floodwalls burst and let the waters rush in.

"I don't really trust the levees," said Robert Washington, who planned to evacuate along with his wife and five children. "I don't want to take that chance. I saw how it looked after Katrina back here."

He leaned over the banister of his porch railing and looked out onto empty lots where houses stood before Katrina. His neighborhood, just a few blocks away from where the floodwall protecting the Lower 9th Ward broke open, remains largely empty.

A few streets over, Arthur Smith was unpacking supplies from his car and taking them into his renovated house.

"We have the lamp oil, the water, non-perishable food items, the radio that works without a battery," he said, listing some items on his checklist.

He was planning to either evacuate or hunker down with his 76-year-old mother and sister. He said that decision would be made Tuesday morning once Isaac's forecast became better defined.

Although Isaac's approach on the eve of the Katrina anniversary invited comparisons, the storm is nowhere near as powerful as Katrina was when it struck. Katrina at one point reached Category 5 status with winds of more than 157 mph, and made landfall as a Category 3 storm.

Still, forecasters at the National Hurricane Center warned that Isaac, especially if it strikes at high tide, could cause storm surges of up to 12 feet along the coasts of southeast Louisiana and Mississippi and up to 6 feet as far away as the Florida Panhandle.

Rain from the storm could total up to 14 inches, with some isolated areas getting as much as 20 inches, along the coast from southeast Louisiana to the extreme western end of the Florida Panhandle.