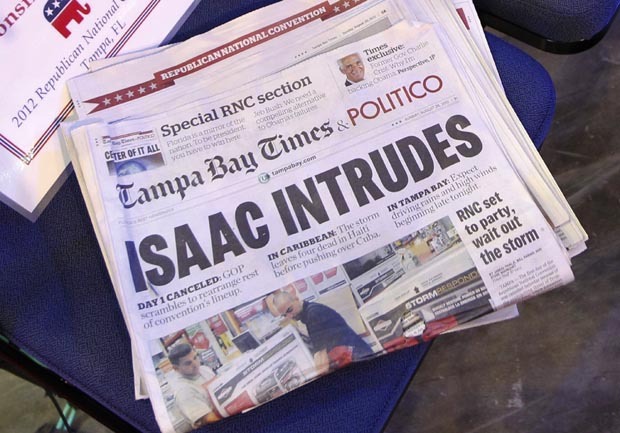 (CBS News) TAMPA, Fla. - The worst of Tropical Storm Isaac, it now appears, isn't going to hit Tampa. But that doesn't mean the organizers of the Republican National Convention are out of the woods.

Isaac is currently barreling not toward Tampa but New Orleans -- and it is projected to hit land nearly seven years to the day after Hurricane Katrina battered that city. And while the convention may not be taking a direct hit, the terrible optics of holding the event while Americans are grappling with a natural disaster leaves Republicans facing the possibility of significantly curtailing their convention plans.

"You don't want to look tone deaf if the rest of the county is riveted on any kind of horrific weather event," said Republican strategist Rick Davis, who was John McCain's campaign manager during McCain's 2008 presidential run. Republicans cancelled the first day of their convention four years ago when Hurricane Gustav approached Louisiana. "If you've got balloons falling from the ceiling, you look horribly out of tune."

The storm has already prompted Louisiana Gov. Bobby Jindal and Florida Gov. Rick Scott to cancel their planned speeches at the convention, and Alabama Gov. Robert Bentley has canceled his trip to Tampa. Asked Monday in New Hampshire if the convention as a whole could be cancelled, Mitt Romney said his "thoughts are with the people that are in the storm's path" but added that Republicans have "a great convention ahead."

Officials speaking to CBS News are giving the impression that the convention will proceed as scheduled. Lawmakers plan to address the storm in speeches and, if it causes damage, call for contributions to the Red Cross.

"We had to err on the side of safety today, but we're moving on," Republican National Chairman Reince Priebus told CBS News Monday. "We're planning on moving forward. All the speakers are going to be absorbed into the rest of the week." After gaveling in the convention on Monday afternoon, Priebus recognized the efforts of those working to protect those in the storm's path from harm. In a conference call late Monday, officials said they had no changes to the schedule, though they did not rule out making them in the future.

Stuart Rothenberg, editor of the nonpartisan Rothenberg Political Report, said that curtailing the convention would cost Republicans an opportunity to put forward a diverse roster of speakers meant to broaden its appeal and make a clear case for their presidential nominee.

"The party was hoping for a four-day love fest where they could talk about the accomplishments, goals and abilities of Mitt Romney and to as lesser extent Paul Ryan and could remind people of the president's failures," said Rothenberg. "They already lost one of those days, which doesn't seem to be much of a problem, but if they were to lose more days that would be more of a problem. They wouldn't be able to deliver the message they were hoping to and they wouldn't be able to showcase the people they were hoping to showcase."

On the Democratic side, Vice President Joe Biden has already cancelled planned appearances in Florida to counter the GOP message. President Obama is scheduled to campaign in Iowa and Colorado on Tuesday and in Virginia on Wednesday. That schedule stands as of now, but it could change depending on Isaac's impact.

Davis, McCain's former campaign manager, said the storm could change the tone of the convention even if it doesn't result in it being cancelled. In 2008, Republican delegates went to work on what would have been the first day of the convention putting together packages to help those affected by Gustav.

"We had really a lot of fun and it was not the typical convention activity - no one wore their funny hats and cocktails were not served, but we did a lot of good and people really felt good about that," he said. "I think you look for opportunities like that to stay connected with what people at home would want you to be doing."

He added that the timing of the storm could potentially benefit the GOP ticket.

"When you're auditioning for president people want to see how you handle these kinds of situations," said Davis. "I think it gives Romney and Ryan an opportunity to show their mettle a little bit and show how empathetic they can be and pull together and help their neighbors."

Asked what it would take for the convention to be cancelled outright, Rothenberg quipped, "If they start building arks."

"If you start getting fatalities and New Orleans floods or something, you'd have to reconsider everything, but it would have to be pretty bad I think," he said. If things do turn serious, Rothenberg added, one option would be to "turn it in to part-convention and part-telethon."