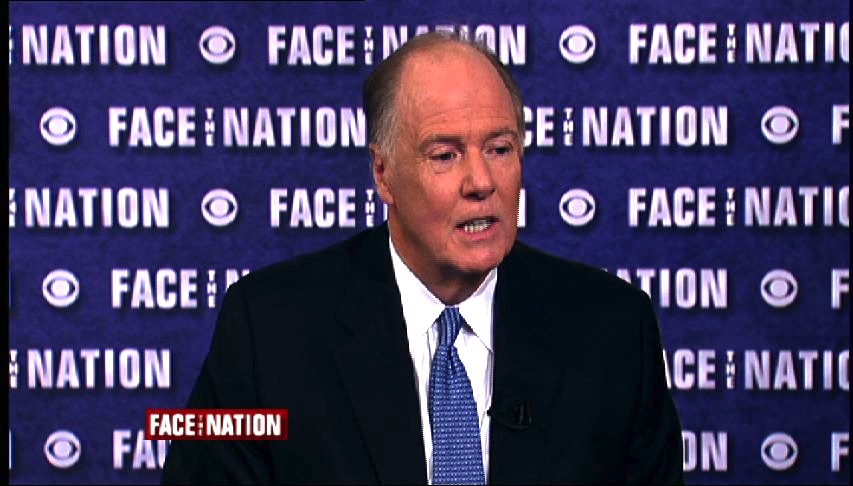 Top U.S. officials urged caution over the possibility that Russia was interested in resolving the crisis in Ukraine through constitutional reform, as the Russian Foreign Ministry said Sunday after a phone call between Russian Foreign Minister Sergey Lavrov and Secretary of State John Kerry.

"We've seen this movie before. We should be cautious," said House Intelligence Committee Chairman Mike Rogers, R-Mich., on CBS' "Face the Nation" Sunday. "If this was just to buy [the] Russians time, I'm concerned about it. If this was truly an effort to allow the referendum happen, which is what I think the Russians are doing so that they have the strength in any negotiation with the government in Ukraine, now that's a whole different story."

Former National Security Advisor Tom Donilon, in a separate appearance on "Face the Nation," was similarly wary because the prospect of discussing Russian interests in Ukraine has been on the table since the crisis began.

Donilon said, "That's going to require the Russians to do a couple things, including talk directly to the Ukrainian government in Kiev. It's something they haven't been willing to do at this point."

He added that there have been no signs of Russia backing down. In the lead up to Sunday's referendum on the status of the Crimean Peninsula, tensions in the region grew. On Saturday, Russian forces took control of a Ukrainian village near the Crimean border, including a natural gas distribution station.

"They fear once the referendum goes through today -- and the outcome is pretty much preordained because it's taking place under full occupation as part of a Russian operation -- they fear gas or an energy cutoff. Crimea is a dependent region in Ukraine," Donilon said.

Rogers said that Russian President Vladimir Putin has "set the table to his advantage" if the U.S. were to enter into negotiations with Russia going forward.

"Clearly Putin has had the upper hand in this. Even though he risks huge economic problems, his popularity domestically has soared. And he doesn't have a lot of great economic issues going on at home. So without this, his popularity was lower," Rogers said. "All of those dynamics in Putin's mind means that he's ahead as he would walk into any negotiation with Kiev. And we're playing catch up."

Donilon suggested, however, that Putin's initial response to the Ukrainian protests last year was motivated by his weakness in the region.

"For him these concepts of balance of power, sphere of influence, zero sum outcomes are very real concepts. And he pursues them. And with respect to Ukraine specifically, he had a big blow. He essentially had Ukraine reject a move to Russia and embrace a move to Europe. And he saw a real loss here, and acted to try to regain leverage and some ability to destabilize the situation, get leverage back in the situation."

Putin's desire to see a unity among countries located at the intersection of Europe and Asia to counterbalance the European Union is "impossible" without Ukraine, Donilon added.

He said it would be important for the U.S. to indicate to Russia what the costs are for continuing the standoff, and noted that that price is already being seen with reduced growth estimates and falling value of Russian currency even before the U.S. has put any formal sanctions in place.