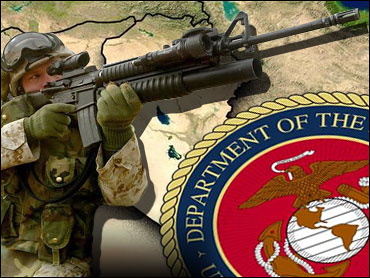 As American troop casualties in Iraq continue to mount, concern is growing they may be outgunned. That includes new questions about the stopping power of the ammunition that is used by the standard-issue M-16 rifle.

Shortly after the U.N. headquarters was bombed in Baghdad in August 2003, a Special Forces unit went to Ramadi to capture those responsible.

In a fierce exchange of gunfire, one insurgent was hit seven times by 5.56 mm bullets, reports CBS News chief investigative correspondent Armen Keteyian. It took a shot to the head with a pistol to finally bring him down. But before he died, he killed two U.S. soldiers and wounded seven more.

"The lack of the lethality of that bullet has caused United States soldiers to die," says Maj. Anthony Milavic.

Milavic is a retired Marine major who saw three tours of duty in Vietnam. He says the small-caliber 5.56, essentially a .22-caliber civilian bullet, is far better suited for shooting squirrels than the enemy, and contends that urban warfare in Iraq demands a bigger bullet. "A bullet that knocks the man down with one shot," he says. "And keeps him down."

Milavic is not alone. In a confidential report to Congress last year, active Marine commanders complained that: "5.56 was the most worthless round," "we were shooting them five times or so," and "torso shots were not lethal."

Bruce Jones is a mechanical engineer who helped design artillery, rifles and pistols for the Marines.

"I saw the tests that clearly showed how miserable the bullets really were in performance," he says. "But that's what we're arming our troops with. It's horrible, you know, it's unconscionable."

To demonstrate to CBS News, Jones fired the larger-caliber 7.62 bullet fired by AK-47s used by insurgents in Iraq into a block of glycerin. The hole cavity is 50 percent or more larger than that of the 5.56.

"You can't just go out and, you know, rig up a little block of Jello and shoot at it and prove anything," says Pierre Sprey, a former Pentagon weapons expert.

Since the early days of the Vietnam War, Sprey has been a champion of the 5.56, and believes it both lethal and light.

"The brilliant thing about that bullet is that it allowed the infantrymen to easily carry 300 rounds," Sprey says. "Whereas the old sharpshooter's heavy, slow round — he could only carry 100."

In the chaos of war, the more bullets the better, he says, because bursts of automatic fire beat one big bullet at a time.

"There is no such thing as a well-aimed shot in combat, because combat is fought by scared 18-year-olds who haven't been trained enough and are in a place they've never seen before," Sprey says.

Here at the Picatinny Arsenal in New Jersey, the government's own engineers have done the most extensive testing on the 5.56 since 1990 and issued two draft reports.

In the first, dated 2004, the 5.56 ranked last in lethality out of three bullets tested.

The army issued a final report last week that concludes in essence that those test results are wrong and misleading. It argues the 5.56 has the "same potential effectiveness" of the 7.62 during the heat of battle.

Either way, there's no questions that if the Pentagon did have any questions about this bullet, it would face some very expensive modifications to the M-16.