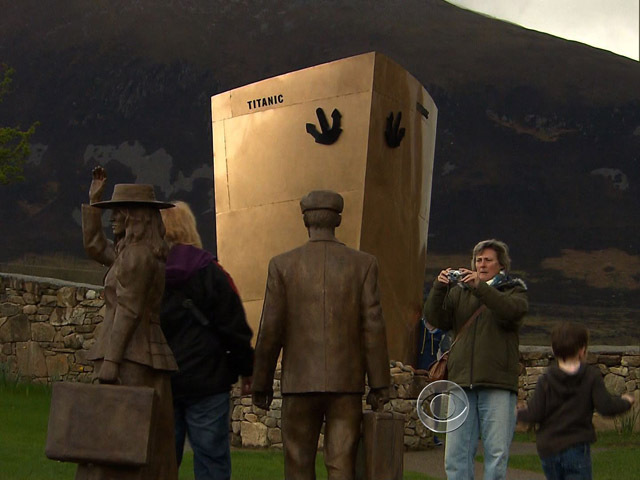 (CBS News) ADDERGOOLE, Ireland - It was a hundred years ago Tuesday that the Titanic set off from England. Among the 1,500 who died when it sank were folks from a small town in Ireland hoping for a new life in America. CBS News correspondent Mark Phillips has their story.

Everything about the Titanic was big: biggest ship, biggest disaster, biggest story.

But this tragedy also came in small packages.

Nowhere was it felt more deeply than here in the remote western Ireland parish of Addergoole. So deeply, it was hardly spoken of for almost a hundred years.

Now, though, they're rehearsing for a memorial service to commemorate the exact moment the ship went down.

Fourteen people from this tiny place sailed on the Titanic -- 11 of them died.

Willie Cusack's cousin, Catherine, who left this now-ruined farm to head for America, was one of them.

"It's like losing a big family, do you see?" said Willie. "Because they all knew one another,do you see? It wasn't just one family. This would be the whole area."

Until recently, the practice here wasn't to try to remember the Titanic tragedy, but to try to forget it: too painful; too many victims in too small a place; and too many families' dreams died on that ship as well.

The area -- one of Ireland's poorest -- sent its children to America not just to a new life, but to send money back so more could follow.

It buried its pain for generations, until a new doctor came to town. Dr. Paul Nolan heard stories from elderly patients.

"Weeping and gnashing of the teeth, and wailing and mourning in the houses," said Nolan. "They were totally distraught and could do nothing all day but weep, weep, weep and mourn."

Feeling the need for some form of closure, Paul became the driving force behind the Addergoole Titanic Society. It's now produced a memorial park and new stained glass windows in the town's church, one that celebrates the heroic act of Pat Canavan. He led third-class passengers up from where they were trapped on the lower decks so at least some had a chance of getting into the life boats.

"And then what happened to him?" Phillips asked Pat Canavan's nephew Tom.

"He passed, he perished."

"He stayed on the ship?"

"He stayed on the ship."

A hundred years later and people here have finally looked into their past and found not just victims they had tried to forget, but heroes.