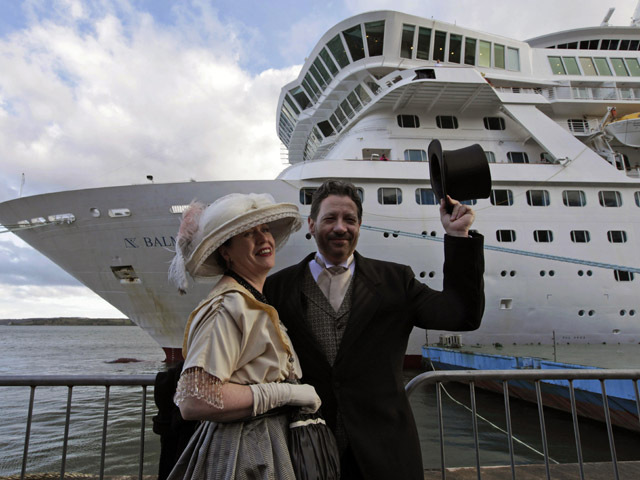 (AP) LONDON - A cruise ship retracing the route of the Titanic had to interrupt its journey on Tuesday because of a medical emergency on board, organizers said.

The Titanic Memorial Cruise — on its way to the North Atlantic site where the Titanic hit an iceberg and sank 100 years ago — had to turn back briefly to the Irish coast so that a sick passenger could be airlifted to a hospital.

Organizers did not identify the passenger or describe the ailment, but the BBC reported that one of its cameramen, Tim Rex, was airlifted by rescue helicopter "as a medical precaution."

The 12-night memorial cruise aboard the MS Balmoral left the Irish town of Cobh late Monday to cross the Atlantic, tracing the route of the doomed liner's maiden voyage in April 1912.

Like the Titanic, it began its journey Sunday at southern England's Southampton. After Tuesday's brief delay, the ship resumed its itinerary and is expected to call in Halifax, Canada on Apr. 16 and in New York on Apr. 19.

The ship, which is carrying 1,309 passengers — including relatives of some of the more than 1,500 Titanic passengers who died — seeks to recreate the Titanic experience, minus the disaster. Many passengers, crew members and stewards are dressing in period costumes. Passengers are eating meals from the Titanic's menu, while a live band plays music of the era.

Two special memorial services are to take place over the weekend: The first close to midnight April 14, when the Titanic hit the iceberg, and the second on early April 15, when the ship sank.

The Balmoral is operated by Fred. Olsen Cruise Lines.