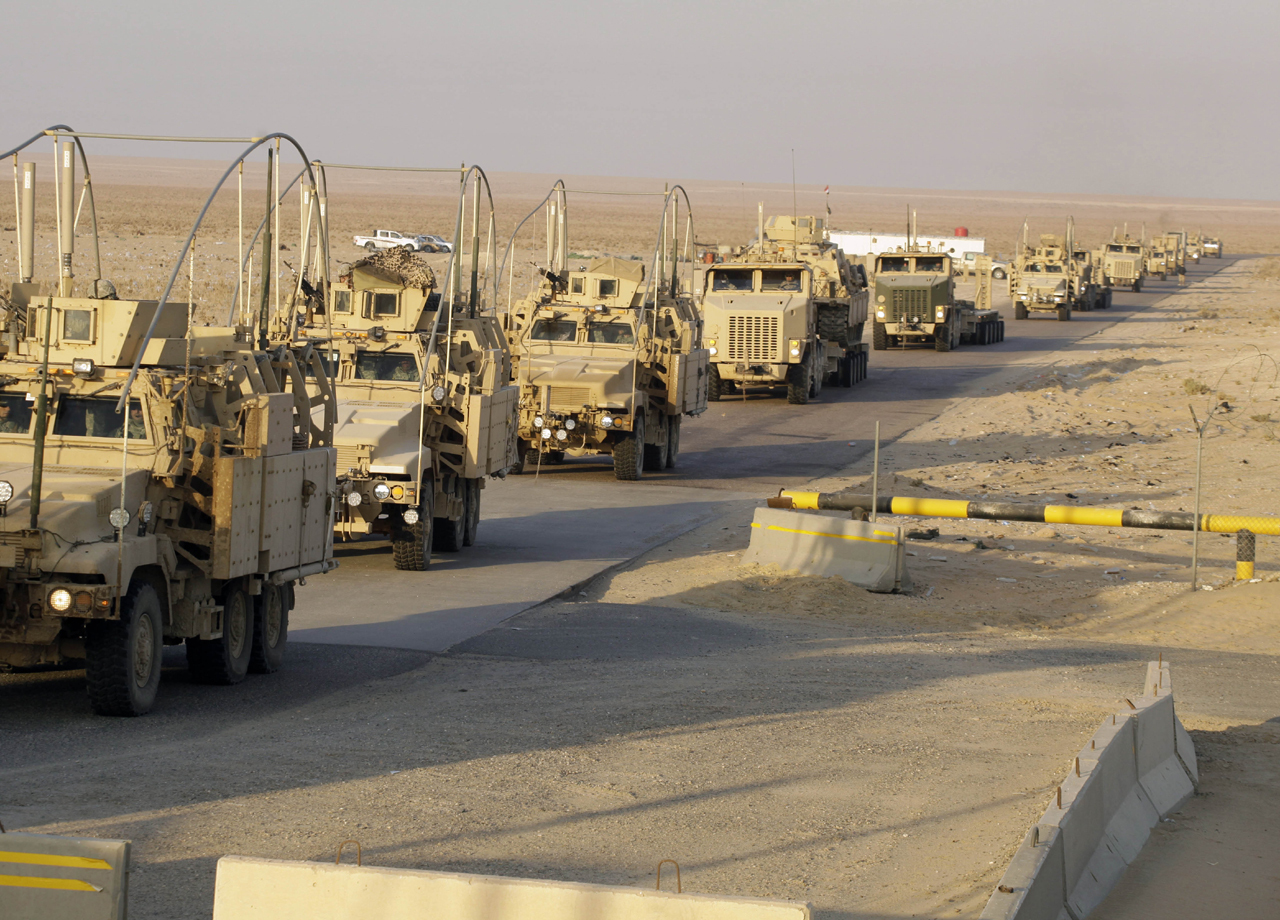 BAGHDAD - Even as Iraqis celebrated the departure of the last American troops Sunday, the dangers left behind after nearly nine years of war were on full display. Politicians feuded along the country's potentially explosive sectarian lines and the drumbeat of deadly violence went on.

The last U.S. convoy rumbled out of Iraq across the border into Kuwait around sunrise under a shroud of secrecy to prevent attacks on the departing troops. When news reached a waking Iraqi public, there was joy at the end of a presence that many Iraqis resented as a foreign occupation.

In the northern city of Mosul, pastry shop owner Muhannad Adnan said he had a swell of orders for cakes — up to 110 from the usual 70 or so a day — as families threw parties at home. Some asked him to ice the cakes with inscriptions of "congratulations for the end of occupation," he said.

But the happiness was shot through with worries over the future.

"Nobody here wants occupation. This withdrawal marks a new stage in Iraq's history," said Karim al-Rubaie, a Shiite shopowner in the southern city of Basra. But, he said, "the politicians who are running this country are just a group of thieves."

"These politicians will lead the country into sedition and civil war. Iraq now is like a weak prey among neighboring beasts."

In the morning, a bomb hidden under a pile of trash exploded on a street of spare car parts stores in a mainly Shiite district of eastern Baghdad, killing two people and wounding four others. It was the latest in the near daily shootings and bombings — low-level but still deadly — that continue to bleed the country and that many fear will increase with the Americans gone.

Violence is far lower than it was at the worst of the Iraq War, in 2006 and 2007, when Sunni insurgents and Shiite militias preyed on Iraqis around the country in a vicious sectarian conflict that nearly turned into complete civil war. But those armed groups still remain, and there are deep concerns whether Iraqi security forces are capable of keeping them in check without the help of U.S. troops.

Iraq's military chief of staff, Lt. Gen. Babaker Zebari said Sunday that his troops were up to the task of uprooting militant groups.

"There are only scattered terrorists hiding here and there and we are seeking intelligence information to eliminate them," Zebari said. "We are confident that there will be no danger."

Equally worrying, the resentments and bitterness between the Shiite majority and Sunni minority in this country of 31 million remain unhealed. The fear is that without the hand of American forces, the fragile attempts to get the two sides to work together could collapse and even turn to greater violence.

In an escalation of the rivalry, the main Sunni-backed political bloc on Sunday announced it was boycotting parliament to protest what they called Shiite Prime Minister Nouri al-Maliki's attempts to monopolize government positions — particularly those overseeing the powerful security forces. The bloc has complained of security forces' recent arrests of Sunnis that it says are "unjustified."

The Iraqiya bloc warned that it could take the further step of pulling its seven ministers out of al-Maliki's coalition government.

"We are against the concentration of security powers in the hands of one person, that is the prime minister," said Sunni lawmaker Hamid al-Mutlaq, a member of the bloc.

In particular, the bloc was angered by the arrest of several bodyguards of Sunni Vice President Tareq al-Hashimi several days ago on suspicion of involvement in terrorist acts. On Sunday, a senior security official said that judges investigating the bodyguards banned al-Hashimi from traveling outside of Iraq — a step that is likely to further anger the Iraqiya bloc, to which al-Hashimi belongs. The security official spoke on condition of anonymity because he was not authorized to talk to the press.

Sunnis have long feared domination by the country's Shiites, who vaulted to power after the 2003 fall of Saddam Hussein at the hands of the Americans. The rivalry was exacerbated by the years of sectarian killing.

The Iraqiya bloc narrowly won the most seats in last year's parliamentary election. But its leader Ayad Allawi was unable to become prime minister, outmaneuvered by al-Maliki, who kept the premier's post after cobbling together key support from Shiite parties.

That has left al-Maliki beholden to Shiite factions, including those led by radical cleric Muqtada al-Sadr, whose militiamen were blamed for sectarian killings during the worst of Iraq's violence. Since forming his new government, al-Maliki has effectively controlled the Interior and Defense Ministries, which oversee the police and military, while conflicts between Sunni and Shiite politicians have delayed the appointment of permanent ministers.

Many on both sides of the sectarian divide also worry that neighboring Shiite-led powerhouse Iran will now increase its influence in their country. Al-Maliki's party and other Shiite blocs have close ties to Tehran. But even some in the Shiite public resent the idea of Iranian domination.

"I am afraid that this occupation will be replaced by indirect occupation by some neighboring countries," said Ali Rahim, a 40-year-old Shiite who works for the Electricity Ministry.

Omar Waadalla Younis, a senior at Mosul University, said at first he was happy to hear the last Americans were gone and thought the city government should hold celebrations in the streets. Then he thought of the possible threat from Iran.

"Now that the Americans have left, Iraq is more vulnerable than before."