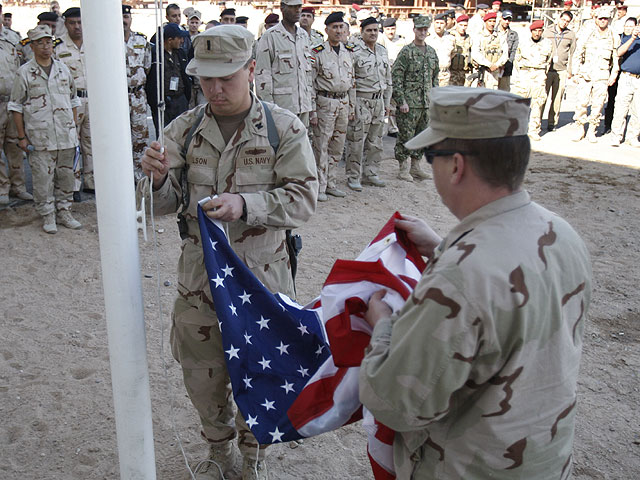 WASHINGTON - President Barack Obama is welcoming home troops who served in Iraq, offering up their service as a lesson of the nation's character.

"There's a reason our military is the most respected institution in America," Mr. Obama said Saturday in his weekly radio and Internet address. "They don't see themselves or each other as Democrats first or Republicans first. They see themselves as Americans first.

"For all our differences and disagreements, they remind us that we are all a part of something bigger, that we are one nation and one people."

President Obama marked the end of the Iraq war earlier in the week, meeting with Iraqi Prime Minister Nouri al-Maliki in advance of the last American troops leaving Iraq by Dec. 31. The withdrawal caps a war in which nearly 4,500 Americans were killed, about 32,000 were wounded and hundreds of billions of dollars were spent.

"Our troops are now preparing to make their final march across the border and out of the country," President Obama said. "Iraq's future will be in the hands of its own people."

The president met with troops at Fort Bragg, N.C., on Wednesday to discuss the end of the war and to honor the military's sacrifice. Mr. Obama opposed the war as a state lawmaker and then made ending the war in Iraq a key part of his 2008 presidential campaign.

President Obama said the nation needs to enlist soldiers returning home in the rebuilding of the nation's economy, noting that his grandfather's generation returned home from World War II "to form the backbone of the largest middle class in history."

"This is a moment for us to build a country that lives up to the ideals that so many of our bravest Americans have fought and even died for," Mr. Obama said. "That is our highest obligation as citizens. That is the welcome home that our troops deserve."

Republicans said in their weekly address that soldiers returning home are most concerned about finding a good job and cited the 1,700-mile Keystone XL oil pipeline as an example of a project that could put people back to work.

Republicans have pushed for a swift decision on the pipeline proposed from Canada to Texas. Obama recently announced he was postponing a decision on the pipeline until after the 2012 elections to allow for more time to study the environmental ramifications of the proposal. An agreement reached by Senate leaders Friday night on a two-month extension of a Social Security payroll tax cut and jobless benefits would require President Obama to decide within 60 days whether to grant a permit for the pipeline.

The pipeline would carry oil from western Canada to Texas Gulf Coast refineries, passing through Montana, South Dakota, Nebraska, Kansas and Oklahoma. The project is expected to create up to 20,000 jobs.

Sen. John Barrasso, R-Wyo., said the project would transport 700,000 barrels of oil a day from Canada and the "steady source of energy from our friend and ally here would make us less dependent on energy from the volatile Middle East — and that is good for America."

Environmentalists have opposed the project but some unions have supported the plan, complicating Mr. Obama's decision.