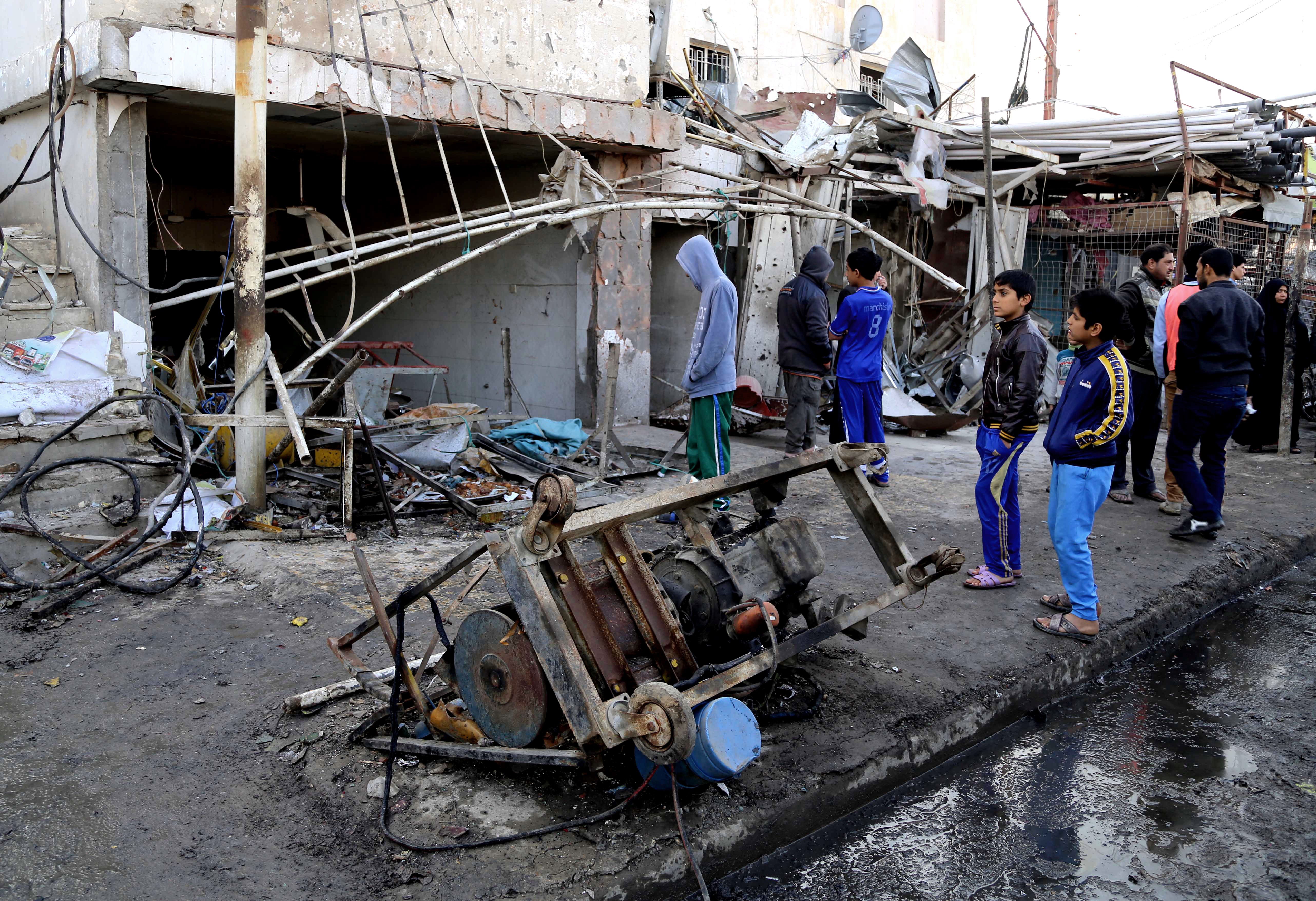 BAGHDAD -- A new wave of car bombs ripped through commercial areas in the Iraqi capital and areas to the south Tuesday, killing at least 33 people and wounding dozens in the latest coordinated militant assault, officials said.

There was no immediate claim of responsibility for the explosives-laden parked cars that detonated Tuesday. But their targets, shopping streets and bus stations, are frequently hit by the al Qaeda breakaway group that is the country's main Sunni insurgent force, as it tries to undermine government efforts to maintain security. The group, known as the Islamic State of Iraq and Levant (ISIL or ISIS), has taken credit for similar attacks before.

In Baghdad, four such bombings killed at least 17 people and wounded 49 others. The deadliest hit a bus station, leaving seven dead and 18 wounded.

Medical officials confirmed the figures. All spoke on condition of anonymity as they were not authorized to release information.

The attacks came a day after a series of explosions in the capital left at least 23 dead. Iraq is experiencing a resurgence in violence to levels unseen since the worst of the country's sectarian bloodletting began to subside in 2007. The nation saw the highest death toll last year with 8,868 people killed, according to United Nations figures.

The blasts came as firebrand Shiite cleric Muqtada al-Sadr delivered a blistering criticism of Prime Minister Nouri al-Maliki in a rare televised address, and reiterated his earlier declaration that he was retiring from politics.

Al-Sadr called on his followers, however, to vote in Iraq's upcoming elections and berated current rulers as "blood-thirsty wolves."

Speaking from his home in the southern revered Shiite city of Najaf, al-Sadr said he would not back specific candidates, but nonetheless said his followers should go to the polls in large numbers in April's vote to ensure the government "will not fall into the hands of dishonest and cunning people."

He did not make clear why he had retired, although also leveled harsh criticisms at politicians in his movement whom he said had exploited the Sadr family name.

Al-Sadr said Saturday in a statement that he had decided to quit politics. He has made such announcements before, but the declarations in recent days have been more emphatic than in the past.

Al-Sadr, who at around 40 years of age is very young for an Iraqi politician of his stature, has long been a wildcard in Iraqi politics. Sunnis held his followers responsible for large-scale sectarian killing, but he has also at times attempted to reach out to Sunnis and is a strong critic of fellow Shiite Prime Minister Nouri al-Maliki, who he implied Tuesday was a "tyrant."

He gained broad support especially from poorer Shiites after the 2003 U.S.-led invasion that toppled Saddam Hussein, whose regime killed his father and grandfather. His movement provided supplies and security in the chaotic aftermath of the 2003 U.S.-led invasion, but also spawned a militia that fought the Americans and is blamed by many Iraqis for much of the sectarian bloodshed of 2006-2007.

In recent years, he has played the role of political kingmaker allowing his followers to gain numbers of seats in parliament and government posts. Sadrists hold 40 out of 325 seats in the legislature, making them the largest single Shiite bloc, and hold six Cabinet seats.  He is allied with critics of Maliki who accuse the prime minister of consolidating power in his hands and taking control of state institutions.

"Politics has become a door for injustice, recklessness and infringement to allow a dictator and tyrant to sit on only to steal the money, cut the necks, bomb the cities, create divisions among sects, buy loyalty and break the hearts so that all will vote for him to stay in power," al-Sadr said in a televised speech, reading from a written statement.

He blamed al-Maliki's government for failing to achieve security or to improve public services or the economy.

"Iraq is being governed by blood-thirsty wolves and people panting after money while leaving the people engulfed with suffering and fear," he said.

He accused the government of "shutting mouths, killing opponents and filling the prisons with them ... Whoever is against it, whether a Shiite or Sunni or Kurd, (they) will accuse him of terrorism and sectarianism and will rely on the politicized judiciary system to eliminate him."

He also accused allied politicians affiliated with the Sadr family and the Sadrist movement, saying that they had been "collecting money, shedding blood and violating people's dignity under our name, shrugging off decisions and religious rulings."

Despite Sadr's harsh attack on Maliki, an analyst said the young leader's decision could actually benefit the incumbent prime minister. It could either splinter the Shiite vote or divert much of it to al-Maliki, said Baghdad-based analyst Hadi Jalo.

"That will definitely weaken the Shiites especially the ones who depended on al-Sadr in past elections," Jalo said. "And that will highly likely benefit Prime Minister Nouri al-Maliki who will be seen by them as the strongest leader for the Shiites," he added.