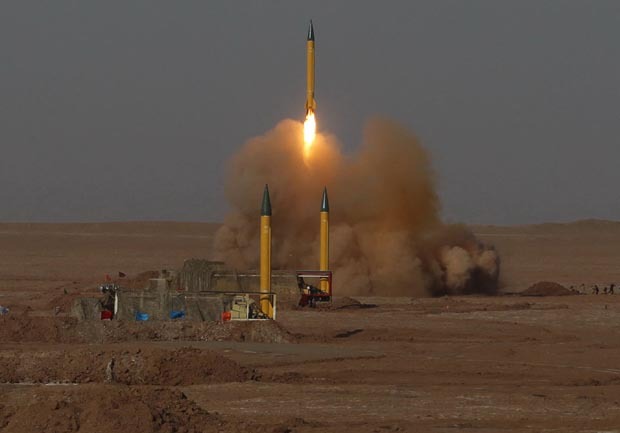 (CBS/AP) TEHRAN, Iran - Iran has test-fired four missiles designed to hit warships during a drill near the strategic Strait of Hormuz, an Iranian military commander said.

The missiles were fired simultaneously and hit a "big target" the size of a warship, sinking it within 50 seconds, Gen. Ali Fadavi of the powerful Revolutionary Guard was quoted as saying by the semi-official Fars news agency.

The Fars report late Monday was the first indication of an Iranian military exercise taking place simultaneously and close to U.S.-led joint naval maneuvers in the Persian Gulf, including mine-sweeping drills, which got under way last week.

The U.S. Navy claims the maneuvers are not directly aimed at Iran, but the West and its regional allies have made clear they would react against attempts by Tehran to carry out threats to try to close critical Gulf oil shipping lanes in retaliation for tighter sanctions over its disputed nuclear program.

Fadavi did not elaborate on the ongoing Iranian exercise or the type of missiles fired but said the Guard is planning a "massive naval maneuver in the near future" in the strait.

Iran regularly holds maneuvers to upgrade its military readiness as well as test its equipment.

The latest drill comes amid tension over Iran's nuclear program and Israel's suggestion that it might unilaterally strike Iranian nuclear facilities to scuttle what the U.S. and its allies believe are efforts to build an atomic bomb.

Tehran denies it is pursuing such weapons and insists its nuclear program is for peaceful purposes.

On Sunday, a senior Guard commander warned that Iran would target U.S. bases in the region in the event of war with Israel. Gen. Amir Ali Hajizadeh, who heads the Guard's aerospace division, claimed no Israeli attack can happen without the support of its most important ally, the United States, making all U.S. military bases a legitimate target.

In an interview with "CBS This Morning," President Mahmoud Ahmadinejad dismissed Israel's threats over its nuclear program.

"By the principle of it, we don't take the Zionist threat seriously," he said ahead of his appearance at the United Nations General Assembly. "We don't even take them into account." The entire interview will be aired on Wednesday morning.

Iran has in the past also warned that oil shipments through the strategic Strait of Hormuz, the route for a fifth of the world's oil, will be in jeopardy if a war breaks out.

For its part, Israel believes that any attack on Iran would likely unleash retaliation in the form of Iranian missiles as well as rocket attacks by Iranian proxies Hezbollah and Hamas on its northern and southern borders.