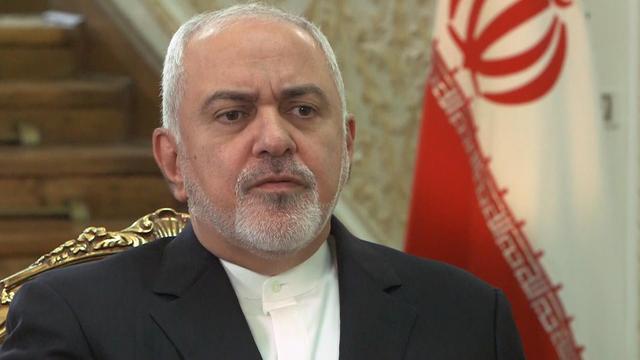 TEHRAN -- In the Iranian capital, a pious crowd assembled on cue for Friday prayers. From the pulpit there was spiritual guidance, mixed with the usual anti-American rhetoric. All Iranians -- be they religious or not -- are worried right now about punishing American sanctions due to kick in on November 4. The measures, imposed by President Trump as he pulled the U.S. out of the Iran nuclear deal, are aimed at preventing Iran from selling its oil around the world.

The worries have already sent Iran's currency plunging, and commodity prices soaring. But to no one's surprise, the Iranian government is putting a bold face on it, insisting that no economic penalties imposed from Washington can force the Islamic Republic's hand.

We asked Iranian Foreign Minister Mohammad Javad Zarif if his country was ready and able to withstand a loss which could amount to more than a third of its vital oil revenue.

"Sanctions will have an economic impact, but they will not change policy. The United States must learn that," Zariff told CBS News in Tehran on Sunday. "The U.S. has an addiction to sanctions and they believe that the sanctions are the panacea that resolve all the problems. They don't. They in fact hurt people and we have an obligation as a government to minimize the impact on the people. But sanctions never change policy."

In fact, many analysts believe harsh sanctions against Iran back in 2013 did in fact help draw Iran to the negotiating table. The result was the Joint Comprehensive Plan of Action signed in 2015 by Iran, the U.S. China, France, Russia, the United Kingdom, Germany and the European Union -- aka, the Iran nuclear deal.

President Trump deciding to pull out of that multilateral agreement was a personal blow to Zarif, who, at least for now, said Iran will continue working with Europe, China and Russia to try and keep the deal together. European nations are already working on a mechanism designed specifically to let them continue trade with Iran, including oil purchases.

It is clear that Iran sees some benefit in those efforts alone, possibly regardless of their outcome.

"It is the first time that the Europeans are not only making statements against U.S., policy but are developing a mechanism to avoid these sanctions and to compensate for the sanctions," Zarif said.

The "impact of those sanctions"

With the nuclear deal under huge pressure following the U.S. withdrawal, and the Iranian economy suffering when many had hoped it would be thriving under eased sanctions, it's been a rocky year in Iran.

Protests by impoverished and disillusioned Iranians have sprung up all over the country. Zarif has admitted that the sanctions hurt, but he said that pain has already been inflicted, and he wouldn't speculate about the new measures' possible impact on domestic unrest.

"Everybody believes that the impact of those sanctions have already affected the economy," Zarif told CBS News.

That is what Zarif and the Iranian regime will be hoping, anyway, because in reality they still don't know how much revenue they stand to lose if the Trump administration really plays hardball and convinces the Chinese and Indians not to buy Iranian oil. If that happens, we asked Zarif if his government might find it has a considerable problem on its hands in the form of ramped-up protests.

"I think the Americans will have a bigger problem than that," he said. "Because then we will take our own measures in response."

He wouldn't elaborate as to what measures Iran might take in retaliation if its oil revenue did dry up, echoing President Trump's own fondness for the element of surprise: "As President Trump said, I want to keep him guessing."

No talks with U.S., but "not ruling out the possibility"

As his country continues trying to pave a pathway forward with Europe and other parties to the nuclear deal, Zarif was adamant that no talks -- on or off the record -- were still taking place with Washington.

An Iranian parliamentarian, who's on the country's security committee, recently said there were secret talks going on right now in Oman to try and hash out revisions to the nuclear deal with the United States.

When we pointed out that he had also denied any secret talks going on in Oman ahead of the nuclear deal, when the rough outlines were sketched out in unofficial discussions behind closed doors, Zarif said, "as soon as I became foreign minister, I moved to make them public."

If there are secret talks going on right now, one theme the U.S. side might be interested in pushing is the fate of four U.S. citizens and two U.S. residents currently in Iranian jails.

Again, Zarif insisted there were no negotiations underway to try and secure those individuals' release, "but I'm not ruling out the possibility of negotiations."

CBSNews.com's Tucker Reals in London contributed to this report.