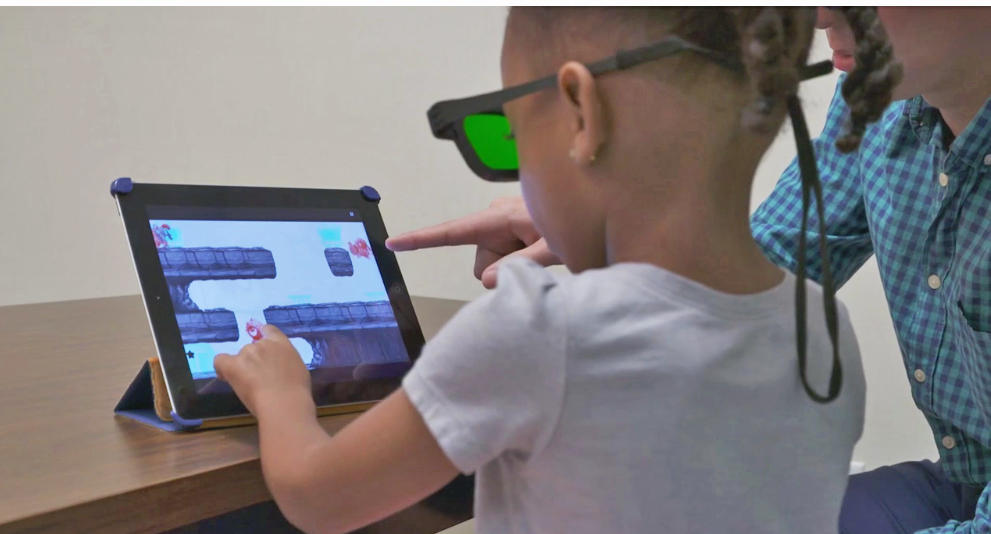 An eye patch is a common way of treating kids who have a “lazy eye,” but a special iPad game holds promise as a treatment, too. New research suggests it may be even better.

Lazy eye, or amblyopia, is a condition where one eye is weaker than the other due to muscle or other visual problems. It occurs in about three out of 100 children.

For the new study, published in JAMA Ophthalmology, 28 children with a lazy eye were assigned to take part in either an iPad game treatment group or an eye patch treatment group. The kids ranged in age from 4 to 10.

The game required the kids to wear special glasses with red and green lenses, similar to 3D glasses, that separate game elements seen by each eye, explained study author Krista Kelly, a postdoctoral fellow with the Crystal Charity Ball Pediatric Vision Evaluation Center at the Retina Foundation of the Southwest, in Dallas. For example, the stronger, healthy eye could see reduced-contrast elements, the amblyopic eye could see high-contrast elements, and both eyes could pick up high-contrast background images. The weaker eye is forced to work harder to keep up.

The youngsters were asked to play the game at home for one hour a day, five days a week for two weeks; a total of 10 hours.

Meanwhile, the kids in the other group followed a more traditional treatment plan, wearing an eye patch for two hours a day, seven days a week; a total of 28 hours. The idea behind the eye patch is that by covering the better eye, the weaker eye has to work harder and create a stronger eye/brain connection.

“We found that the game was better than patching and children in that group improved twice as much,” Kelly told CBS News.

What was even more encouraging, she said, is that improvements occurred within 10 hours, less than half the time the researchers had required for the patch group.

The authors reported that 39 percent of the children in the iPad game group achieved 20/32 vision or better, compared with only 7 percent of the kids in the eye patch group.

With traditional eye patch treatment, some children still don’t achieve 20/20 vision or learn how to work both eyes together, Kelly said.

The game, on the other hand, was engaging for the kids, said Kelly, a real plus because wearing the “pirate” patch can become cumbersome over time and compliance is an issue.

“The game has cute little miners and animals that have to run around and dig for gold and they have to get it as fast as they can. The game gets increasingly difficult as you go through it,” said Kelly.

One of the keys to treating amblyopia is to catch it and correct it early, said a Dr. Wendy Sue Swanson, executive director of Digital Health at Seattle Children’s Hospital and a pediatrician at The Everett Clinic in Mill Creek, Washington. But amblyopia is sometimes missed on vision tests in the pediatrician’s office.

“The reason you avoid amblyopia in the first few years of life is that the visual input really maps the brain. If one of your eyes doesn’t have visual input, you map more monocular vision. Or if one muscle is really weak, you’ll map the brain really differently for the rest of your life,” explained Swanson, who was not involved in the study.

She said the study was small but strong because it included children with eye muscle problems as well as children with other visual conditions where one eye did not see as well as the other.

She was impressed with the iPad approach and said parents shouldn’t be turned off by “screen time” in cases like these, where it serves a beneficial purpose. The more appealing a treatment is to a child, the more compliant a child will be.

“I like the beautiful overlay of thinking in this study — about knowing what a standard of care is for an intervention and then using a tool to make it more engaging and child centered,” said Swanson.

“The preliminary studies so far show promise but are only short term. We want to try adding new games, and we definitely want them to play it more than four weeks,” she said. They are even looking beyond iPad games, to options like movies.