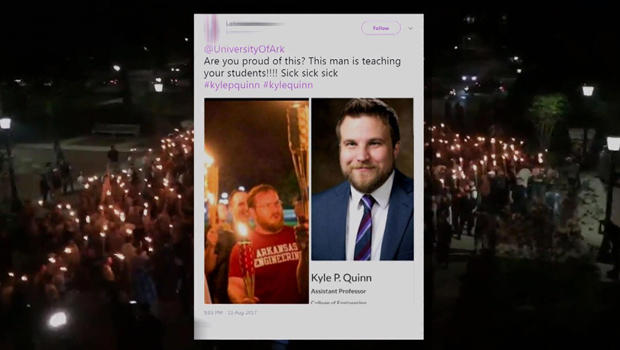 The words FOR SHAME have long been spoken to people accused of offensive behavior. Now, thanks to the Internet, those words (and worse) can be sent, sometimes unjustifiably, to millions around the world. Our Cover Story is reported by David Pogue of Yahoo Finance:

Last Friday night, Kyle Quinn, an assistant professor at the University of Arkansas, was enjoying a pleasant night out with his wife at Crystal Bridges Museum in Bentonville, Ark. "I saw some nice art exhibits with my wife, and we went to dinner up there and just had a lovely evening," he told Pogue.

Suddenly, there was an inkling that something was amiss. "A lot of frantic emails from the university, trying to reach me. And I thought that my weekend was about to be ruined."

While Quinn was at that museum in Arkansas, white supremacists were gathering in Charlottesville, Virginia -- and on the Internet, outraged onlookers misidentified Quinn as one of the participants.

Did he think there was a resemblance? "Not really. I understand, I've got a beard!" he laughed. "I understand that some people could see a resemblance there. But anyone that knows me knew right away that that's not me."

But people who didn't know Quinn decided that he had to be punished. He began receiving "really vulgar messages that you could never air. There were messages coming to my email, messages on my work phone. Things on Twitter, Instagram, Facebook as well."  The messages implied that he was a racist.

That was Kyle Quinn's introduction to a modern form of public humiliation known as Internet shaming, where online mobs descend upon one person in a wildly out-of-proportion attack.

Quinn felt his personal safety was threatened. "The most troubling thing to me and my wife, really, was, someone identified where we live, our home address. Any time you have an angry mob and someone says, 'Hey, this is where the guy lives,' that's a threat in my book. So we decided to head over to a friend's house for the evening."

The Internet mob was so aggressive that the real man in the photo -- Andrew Dodson -- came forward, expressing guilt that attacks were directed at Kyle Quinn.

"I'm certainly an example that mistakes can be made," Quinn said.

Sometimes, the public piles onto someone famous, like comedian Kathy Griffin who posted a gruesome anti-Trump photo. One critic tweeted, "It's cute how #kathygriffin is dipping her toe back into the Insult Trump pond. I hope she gets her leg bitten off. Or her head. Whatever."

But other times, it's a non-celebrity, like Walter Palmer, a dentist who shot Cecil the lion in 2015. [One Twitter user tweeted, "Dear #WalterPalmer ...  Haven't you died a slow, gut-sickening death yet?"]

Or James Damore, the Google employee who was fired after writing that men are more biologically-suited to technical jobs than women.

"It's profoundly traumatizing," said author Jon Ronson. "And people kill themselves. I know of four suicides in the last couple of months."

Ronson's book about Internet shaming, "So You've Been Publicly Shamed" (Riverhead Books), tells the stories of regular people who become the target of intense Internet harassment.

It all begins when something you post intended only for your circle of friends makes its way to the wider online public.

"It can just go around the world," he said.

"Millions of people will know about this human being that nobody had heard of an hour earlier."

Which brings us to Adam Smith. He became a target in 2012 after he recorded a tense exchange with a cashier at a Tucson Chick fil-A on his phone. The plan had been to be part of a protest against the company.

Smith: "Chick-Fil-A is a hateful corporation. This is a horrible corporation with horrible values."
Clerk: "I hope you have a really nice day."
Smith: "I will. I just did something really good. I feel purposeful."

"I never yelled or called her names or anything, but it got a little heated, a little bit," Smith told Pogue. "And I thought, I'll just upload it."

The mob soon descended. "We received letters that had pictures of people having sex, and hate, and swastikas, and someone mailed feces through the mail," he said.

And then it got really bad.

"They put my kids' elementary school address online," Smith said. "And they were kindergarteners and first graders. So that's when we moved out of the house."

Adam lost his job as a CFO. He wound up on food stamps, and then separated from his wife. "I started questioning things that I never had questioned in my life," he said. "Whether or not I should even be alive."

If you're a woman, though, the abuse can go to a whole new level of viciousness.

Kendall Jones was a Texas cheerleader who enjoyed big-game hunting with her father. Her hunts were licensed and legal, and big game hunters routinely take trophy pictures. But Jones' photos went viral.

And the messages poured in: " 'Hi. I am going to find you, and I'm going to rape you, and torture you, and rip each of your limbs off one by one until you have the most painful death.'  'You're disgusting.' 'You're ugly.' 'You're fat.' 'Your hair is ugly.' 'Your eyes are too far apart.' 'You look like a horse.'

"Can you say that to someone? Much less say it to their face?" she laughed.

The goal of Internet shamers is to destroy the person, says John Suler, a clinical psychologist at Rider University in New Jersey, and the author of "Psychology of the Digital Age" (Cambridge University Press).

Pogue asked him how people can treat strangers this way. "A lot of this boils down to a lack of empathy for someone online," Suler replied. "There's a tendency to see that person not as a real individual, but as an object, as a target."

Internet shamings follow patterns. The victim's post or tweet is taken out of context. That was true for Kendall Jones ("Someone said I shot a tiger. They don't even have tigers in South Africa") and for Adam Smith ("Lot of people didn't know that it was an organized protest").

Or, people are mis-identified, like Kyle Quinn, who wasn't anywhere near Charlottesville.

The shaming usually dies down after a week or so. But according to Ronson, for the victim, it's not over quite so soon. "A year-and-a-half is when they get a new job, and they're not thinking about it every morning, and they're not waking up in the middle of the night," he said.

But even then, a shaming is tied to the victim forever, with their Google search results always listing this transgression at the top.

Pogue asked Smith what advice he would give to a shamee. "I know what it's like to be you," he sighed. "And I'm sorry."

"Can you say it does get better?"

"It can get better, if you face what has happened, and you really come to terms with what happened," he said. "You really did get ostracized and publicly humiliated. And it probably wasn't fair."

So, is there any hope that the Internet might become a kinder place?  "I wish that I could say that Twitter will be a haven where nothing abusive will ever happen. But we're not always going to get it right," said Del Harvey, the vice president of Trust and Safety at Twitter. In the last few years, she's overseen a range of improvements designed to rein in Internet shamings.

Twitter has also tried to make life more difficult for the attackers. "The vast majority of the worst of the worst content, it's not a hundred people; it's one person who created a hundred accounts," she said.

"It's a long road to go, and there are still a lot of things that we already know that we want to work on," Harvey said.

Kyle Quinn was lucky that his shaming ended quickly. "Clearly I think, this is a demonstration that an online mob that forms is probably not the best way to carry out justice," he said.

As for Adam Smith, he is happily employed and still married. But even five years later, his Internet shaming still haunts him.

"Emotionally, I'm a very different person today than I was before the protest and before the shaming," he said. "I know what it's like to get hurt. And I don't want that to happen to anybody else anymore. Like, we need to stop it. Like, we gotta stop it."