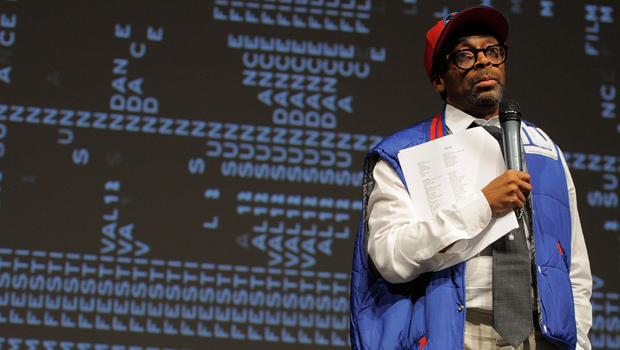 (CBS News) Movie director Spike Lee is in hot water over a Twitter retweet that has left a Florida couple fearing for their safety.

Looks like the actor and director was a little too quick to retweet the home address of Elaine and David McClain, whose youngest son's name is very close to that of George Zimmerman - the neighborhood watch volunteer who shot and killed unarmed 17-year-old Trayvon Martin on Feb. 26 in Sanford, Florida.

The incident has set off a nationwide debate over race and justice. Zimmerman has claimed self-defense and has not been arrested.

"My youngest son, his last name is Zimmerman and his middle name is George," McClain told WKMG local news. "He definitely owes us a big apology. All of this is really scary and it's a shame. There's no reason they put our address out there without checking to see who lived there."

According to Fox News, the couple is now living in a hotel because of hate mail, media and neighbors questioning them since the tweet went out.

The original tweet was sent out by Marcus D. Higgins, a 33-year-old Los Angeles man. Lee was one of the people Higgins tweeted to get the word out on March 23.

"@SpikeLee EVERYBODY REPOST THIS George W. Zimmerman, [address removed], Sanford, Florida 32773," @maccapone wrote in a reply to one of Lee's tweets.

After the discovery the address was incorrect, Higgins apologized via Twitter and sent this tweet to Lee: "GOD BLESS YOU I KNOW YOU HATE ME BUT I DON'T HATE YOU I DID APOLOGY FOR RETWEET THE WRONG ADDRESS."[sic]

Lee, who has almost 250,000 followers on Twitter, has yet to release a statement or response to the case of mistaken identity. He is, however, retweeting racially-charged tweets directed at him in the fallout of events.

"People,The Thinking Behind Me Retweeting These Insane Racist Rants Is Because This Sickness Must Be Exposed.USA Post Racial Society?????????"[sic] @spikelee tweeted.

Now there is talk of Higgins and the retweeters violating Twitter's content boundaries and use, which states: "You may not publish or post other people's private and confidential information, such as credit card numbers, street address or Social Security/National Identity numbers, without their express authorization and permission."

The company did advise that anyone in the same predicament as the McClains should file a report, which will result in an investigation and "may result in the removal of content." More information can be found at the Twitter safety help page.