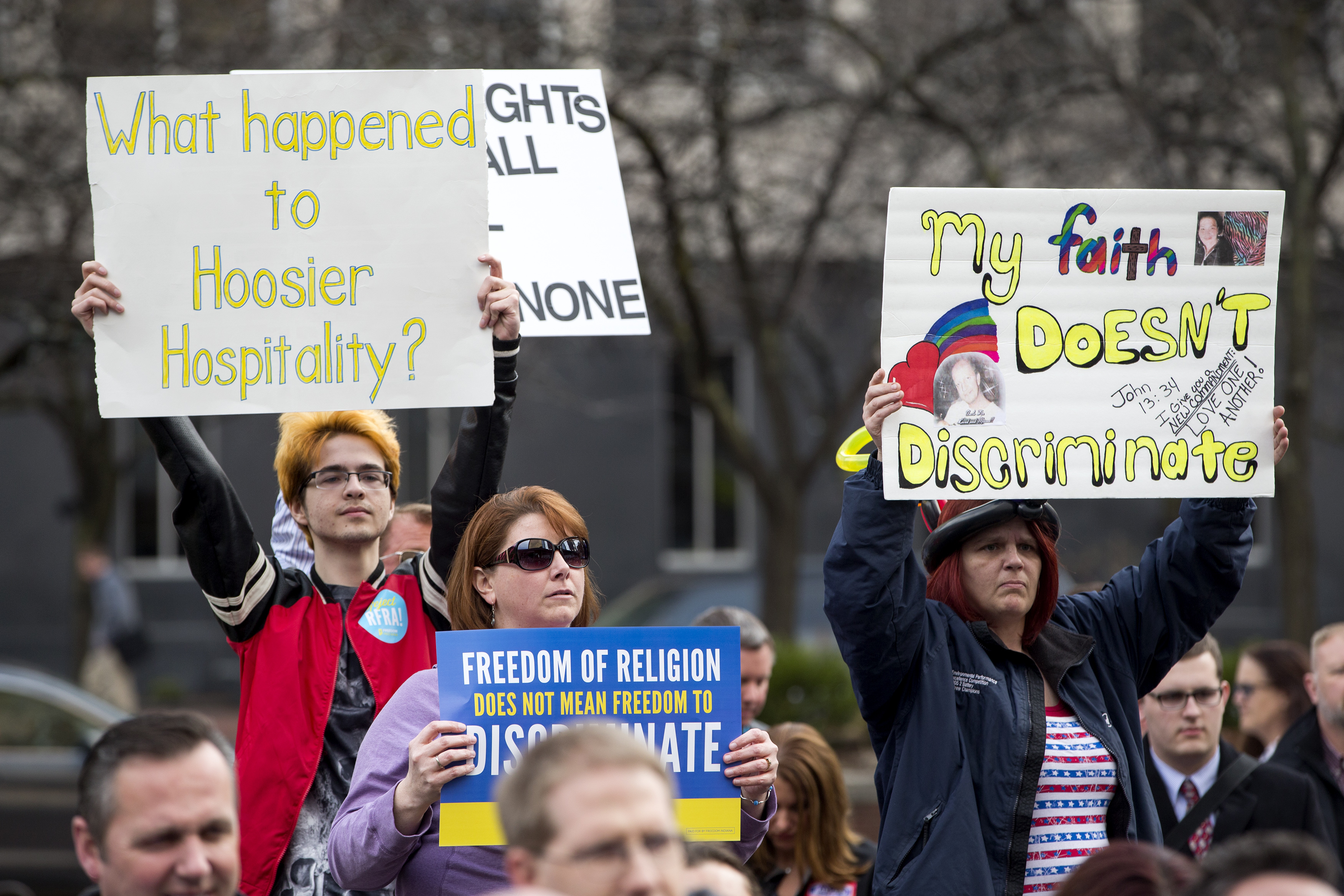 The backlash has rained down on Indiana Gov. Mike Pence since he signed a religious freedom bill into law earlier this month. While supporters say the law ensures the government can't infringe on how they exercise their religious beliefs, opponents argue it gives individuals and businesses carte blanche to discriminate against gays and lesbians.

To hear Pence, a Republican, tell it though, he's merely following in the footsteps of two prominent Democrats - Barack Obama and Bill Clinton.

"The Religious Freedom Restoration Act was signed into federal law by President Bill Clinton more than 20 years ago. And it lays out a framework for ensuring that a very high level of scrutiny is given any time government action impinges on the religious liberty of any America," Pence said on ABC's "This Week" over the weekend. "After that, some 19 states followed that, adopted that statute. And after last year's Hobby Lobby case, Indiana properly brought the same version that then-state Senator Barack Obama voted for in Illinois before our legislature."

Indiana did, in fact, become the 20th state to adopt a Religious Freedom Restoration Act (RFRA) modeled after a version passed by Congress and signed into law by former President Bill Clinton in 1993. But as the unanimous vote in the House and near-unanimous vote in the Senate show, the circumstances were far different.

The 1993 law was a reaction to a 1990 Supreme Court ruling, Employment Division v. Smith, which made it easier for the government to restrict the practice of a certain religion. The legislation restored the standard for the government to show a compelling interest before restricting religious practices, and said it must chose the least restrictive means of doing so if it had an interest.

In the signing ceremony, then-Vice President Al Gore described some of the cases the legislation aimed to fix: Subjecting people to mandatory autopsies when their religion forbade it, zoning churches out of residential areas or government dictating the architecture of churches. The 1990 Supreme Court case involved a Native American man who was denied unemployment benefits because he consumed peyote as part of a Native American Church religious ritual and was fired after taking the drug. The bill had bipartisan sponsorship in both the House and the Senate, and was backed by a wide coalition that included both religious groups from across the spectrum and the American Civil Liberties Union (ACLU).

That law was designed to prevent people from being victimized for their religion, not to enable people to rely on their religion to justify declining services to certain classes.

According to the National Conference of State Legislatures, two states, Connecticut and Rhode Island, adopted their own RFRAs in 1993. Many other states relied on the federal version, until the Supreme Court ruled in 1997 in City of Boerne v. Flores that the federal law didn't apply to the states. Over the next five years, 11 more states - Alabama, Arizona, Florida, Idaho, Illinois, Missouri, New Mexico, Oklahoma, Pennsylvania, South Carolina, Texas - passed their own versions. Illinois was among the early states, adopting its version in 1998. As in Congress, the support was overwhelming and the state Senate passed the law 56-0. Then-State Sen. Barack Obama was among those voting for the law.

Though the bills passed by Illinois and Indiana are broadly similar, opponents of the Indiana law point out two substantial differences. The ACLU has seized upon the fact that Indiana's law specifically says people can claim a religious freedom exemption "regardless of whether the state or any other governmental entity is a party to the proceeding."

"The Illinois law was written and designed to allow someone to change the government's burdens on people's religious beliefs," Eunice Rho, ACLU advocacy and policy counsel, told Politifact. "The Indiana law specifically says you can use the law in a lawsuit even if the government isn't a party."

Another difference noted by the Human Rights Campaign is the fact that Indiana's law specifically defines a "person" whose rights cannot be infringed on as "a partnership, a limited liability company, a corporation, a company, a firm, a society, a joint-stock company, an unincorporated association." The Illinois law, by contrast, does not offer this broad definition, though the federal law has been interpreted to apply to corporations, too, University of Virginia constitutional law professor Douglas Laycock told Politifact.

That could change. Indianapolis Mayor Greg Ballard on Monday afternoon called on the Indiana General Assembly to add sexual orientation as a protected class to its state civil rights law, in response to the state's new RFRA.

To date, a state RFRA law has not successfully superseded local nondiscrimination laws. Perhaps the most high-profile example is that of Elane Photography, in which the owner of a photography studio refused to photograph a lesbian couple's commitment ceremony. Even though New Mexico has had an RFRA law on the books since 2000, she lost her appeal, and the Supreme Court said that the studio was not protected by the RFRA because the government was not a party to the suit (the state did, however, have a Human Rights Commission that found the photography studio had violated New Mexico's public accommodation law that bans discrimination on the basis of sexual orientation).

Arizona, which has had a religious freedom bill on the books since 1999, tried to expand its RFRA in 2014 in a way that would have made it very similar to Indiana's new law. In 2014 the state legislature passed a bill that would have extended the religious protections to corporations and other businesses, and would have allowed the law to be used in suits between individuals. The backlash was so intense that Republican Gov. Jan Brewer ultimately vetoed the bill amid a very public rebuke from companies like Apple, American Airlines, and Marriott. The Arizona Super Bowl Host Committee warned that the bill could jeopardize the chances of Arizona hosting the Super Bowl the following year, and even Major League Baseball weighed in disapprovingly.

Indiana has faced a similar backlash from companies like pharmaceutical giant Eli Lilly and Angie's List, which put a multi-million dollar expansion on hold. Apple CEO Tim Cook penned an op-ed in the Washington Post, in which he wrote, "on behalf of Apple, I'm standing up to oppose this new wave of legislation -- wherever it emerges. I'm writing in the hopes that many more will join this movement. From North Carolina to Nevada, these bills under consideration truly will hurt jobs, growth and the economic vibrancy of parts of the country where a 21st-century economy was once welcomed with open arms."

"Regardless of what the law might allow in Indiana or Arkansas, we will never tolerate discrimination," he wrote.

The popularity of such religious freedom laws declined in state legislatures for much of the 2000s, but have picked up against in the last five years. Since 2010, Louisiana, Kentucky, Kansas and Mississippi have all added such laws. More are pending before the state legislatures in Arkansas, Colorado, Georgia, Hawaii, Michigan, Montana, Nevada, North Carolina, South Dakota, Utah, Wyoming, and Oklahoma, South Carolina and Texas are all looking to tweak their laws.

What has changed since the original 1993 is the climate in which these laws have been passed. Same-sex marriage is now legal in 37 states and the District of Columbia. That number includes Indiana, where it became legal last October when the Supreme Court refused to hear an appeal to a district court decision that invalidated a law limiting marriage to heterosexual couples.

There was, however, a favorable ruling from the Supreme Court last June, when it ruled that the Obama administration must exempt closely-held firms like Hobby Lobby from a rule requiring large companies to pay for their employees' birth control. The Court said the company was protected by the federal RFRA.

Pence and the bill's backers have suggested that they were motivated by the Hobby Lobby decision.

"Last year the Supreme Court of the United States upheld religious liberty in the Hobby Lobby case based on the federal Religious Freedom Restoration Act, but that act does not apply to individual states or local government action," Pence said in a statement released when he signed the bill into law. "In order to ensure that religious liberty is fully protected under Indiana law, this year our General Assembly joined those 30 states and the federal government to enshrine these principles in Indiana law, and I fully support that action."

"What's kind of gone south with the RFRAs," University of Illinois law professor Robin Fretwell Wilson, who supports the Indiana law, told the Indianapolis Star, "is the RFRAs are really trying to do real work for religious minorities. But they've been glommed onto by religious believers who are freaked out by same-sex marriage right now. They're latching onto a vehicle that is just not designed to do what they want it to do, at a time of great social change."

But Pence sought to fight the impression that the law gives license to discriminate. In a Wall Street Journal op-ed published Monday evening, he wrote that he abhors discrimination and would not eat at a restaurant if he saw the owner refuse to serve a gay couple.

"Some express concern that Indiana's RFRA law would lead to discrimination, but RFRA only provides a mechanism to address claims, not a license for private parties to deny services. Even a claim involving private individuals under RFRA must show that one's religious beliefs were 'substantially burdened' and not in service to a broader government interest--which preventing discrimination certainly is. The government has the explicit power under the law to step in and defend such interests," he wrote.