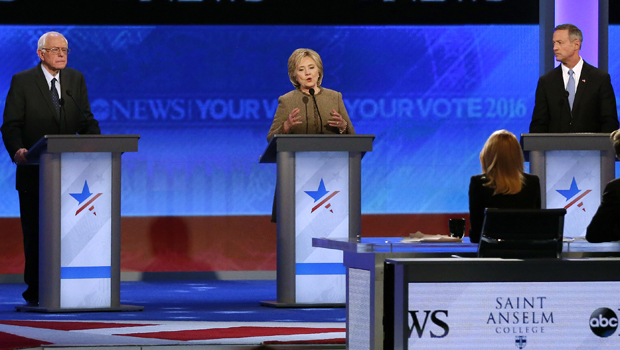 There are noteworthy differences between Democratic front runner Hillary Clinton and the two other candidates running for the party's 2016 nomination, on everything from health care and taxes to foreign policy.

Sen. Bernie Sanders and former Maryland Gov. Martin O'Malley were happy to draw those contrasts on the debate stage in New Hampshire Saturday night. Clinton, although she gave a spirited defense against her primary opponents, was looking past the debate stage to the general election.

"I'm very clear that we have a distinct difference between those of us on this stage tonight and all of our Republican counterparts. From my perspective, we have to prevent the Republicans from rolling back the progress that we've made," Clinton said in her opening statement. She mentioned the Republican Party or GOP front runner Donald Trump at least seven more times over the course of the debate.

Early in the debate, Clinton and Sanders -- the stronger of her two opponents -- showed a unified front against the GOP, refusing to attack each other over a recent Democratic data breach. The Sanders campaign admitted that some of its staffers inappropriately accessed private Clinton campaign information, but Sanders on Saturday night was ready to plainly apologize. Clinton had a response that mimicked Sanders' conciliatory approach to her email controversy: "I don't think the American people are all that interested in this," Clinton said.

O'Malley attempted to use the controversy to suggest he would bring new ethical standards to Washington. However, his complaint about the "bickering back and forth" between Clinton and Sanders fell flat, given that both were ready to drop the issue.

Meanwhile, Clinton went on to slam the Republicans on gun control: "Nobody on the other side will even admit there's a problem," she said. She also critiqued their lack of interest in raising the minimum wage, remarking, "You're not going to hear anything like this from the Republicans running for president."

She repeatedly called out the GOP for using demagogic language that alienates Muslims both in America and abroad.

"We must work more closely with Muslim-American communities," Clinton said. "They will be our early warning signal [for terrorist activity]. That's why we need to work with them, not demonize them, as the Republicans have been doing."

Later in the debate, without any prompting, Clinton specifically called out Trump on this matter:

"I worry greatly that the rhetoric coming from the Republicans, particularly Donald Trump, is sending a message to Muslims here in the United States and literally around the world that there is a 'clash of civilizations,'...which then I believe fans the flames of radicalization," she said.

Clinton continued her attacks on Trump twice more in the debate, once when the ABC moderators expressly asked her about the Republican candidates, and once more on her own accord. She railed against his "bluster and bigotry," calling him "ISIS's best recruiter."

Sanders also worked in an attack against the GOP front runner, calling him out for his controversial remarks about Muslims and Mexicans. While Trump blames various ethnic groups for America's woes, Sanders argued, "the rich get richer."

"What I say to those people who go to Donald Trump's rallies, understand: He thinks a low minimum wage in America is a good idea. He thinks low wages are a good idea," Sanders said. "I believe we stand together to address the real issues facing this country, not allow them to divide us by race or where we come from."

Still, Sanders was more focused on challenging the Democratic front runner than the GOP front runner. As he has in previous debates, he called out Clinton for her 2002 vote for the Iraq war.

"I voted against the war in Iraq because I thought unilateral military action would not produce the results that were necessary and would lead to the kind of unraveling and instability that we saw in the Middle East," he said. "I do not believe in unilateral American action."

Sanders continued to draw a distinction between his approach and Clinton's approach to the Assad regime in Syria, and to regime change in general.

"Our differences are fairly deep on this issue," he said. "I worry too much that Secretary Clinton is too much into regime change and a little bit too aggressive without knowing what the unintended consequences might be."

He added, "I think in Syria the primary focus now must be on destroying ISIS and working over the years to get rid of Assad. That's the secondary issue."

Clinton noted that Sanders voted in the Senate for a U.N. Security Council validation of Libyan dictator Muammar Qaddafi's removal from power. She also echoed an argument that President Obama recently made in defense of the United States' intervention in Libya, suggesting the situation would be worse if Qaddafi were still in power.

Clinton also used the opportunity -- as she did repeatedly in the debate -- to stress her longtime experience in Washington: "All of these are very difficult issues. I know that; I've been dealing with them for a long time," she said.

Clinton and Sanders also presented a clear contrast in working with corporations. When asked whether corporate America should "love" Hillary Clinton, the front runner responded, "Everybody should -- I have said I want to be the president for the struggling, the striving and the successful."

Sanders, of course, said that corporate America would not love his presidency.

While Clinton was more interested in taking on the GOP than her Democratic opponents, she was compelled to make a new campaign promise on the debate stage, setting herself apart from Sanders and O'Malley: "I'm the only candidate on this stage saying no middle class tax raises," Clinton said.

She criticized Sanders for supporting a Medicare-for-all health care system, as well as paid family leave legislation, that would raise taxes on middle class Americans.

Sanders defended his approach. "Now, when Secretary Clinton says, 'I'm not going raise taxes on the middle class,' let me tell you what she is saying," he said. "She is disagreeing with FDR on Social Security, LBJ on Medicare and with the vast majority of progressive Democrats in the House and the Senate, who today are fighting to end the disgrace of the United States being the only major country on Earth that doesn't provide paid family and medical leave."

O'Malley also responded to Clinton's tax promise, saying, "I'd never make a promise like that."