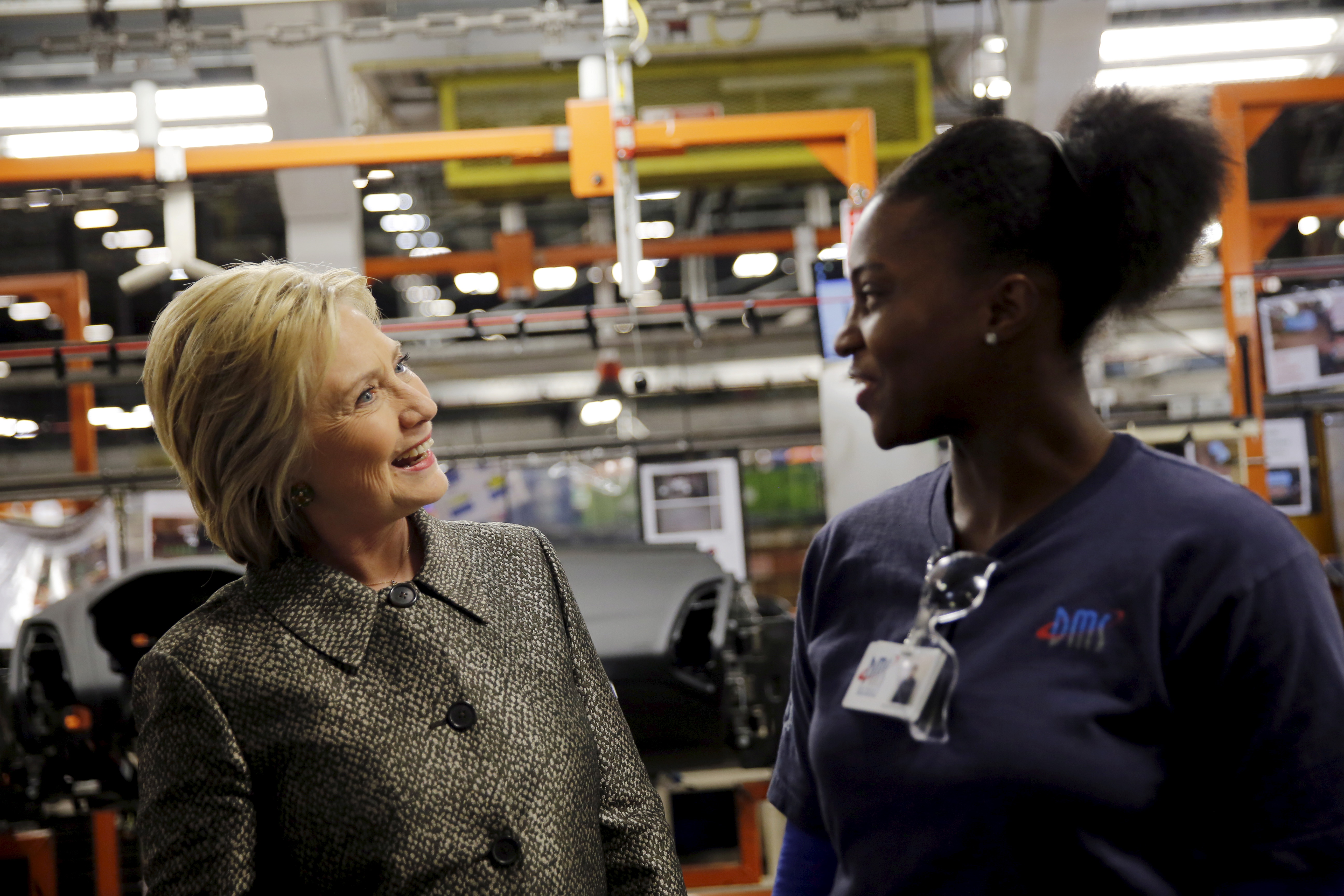 "We need a new bargain for the new economy," she said, speaking on the floor of a manufacturing plant in front of a large audience of workers and union members. "A new bargain to ensure that the jobs of the future are good-paying, American jobs, the kind that provide both good incomes and the dignity, pride and sense of purpose that come when you have something to look forward to when you get up in the morning."

Clinton's new proposal, a "clawback" of tax benefits, would require companies that have moved facilities overseas or outsourced jobs to give back what relief they've received. The measure would apply retroactively to tax breaks received in "several previous years," according to a Clinton aide.

As an example, Clinton singled out Nabisco as a company that her proposal would target, for "taking taxpayers dollars with one hand and handing out pink slips with the other."

"If you aren't going to invest in us, why should taxpayers invest in you?" Clinton said.

The "clawback" is the third piece of tax reform that Clinton has proposed during her campaign with the goal of repatriating jobs that have shifted overseas. She has also proposed the creation of an exit tax for companies that relocate their headquarters outside the United States, through what's known as an "inversion," in order to lower their tax burden.

Clinton has put raising American incomes at the center of her campaign.

But Clinton's opponent in the race for the nomination, Bernie Sanders, has stepped up his attacks on her in recent days, as the two compete for votes in the Michigan primary on Tuesday. At a press conference in Lansing on Thursday, Sanders tied Clinton's support for past trade deals, like the North American Free Trade Agreement, to devastating job loss in Michigan and across the United States.

"Was she right to vote for or support NAFTA?" Sanders said. "Was she right to support permanent normal trade relations with China? The answer is she was very, very wrong, and millions of families around this country have been suffering as a result of these disastrous trade agreements."

And earlier Friday, the Sanders campaign pushed out a video online that shows Clinton in India in 2012 saying that there are "pluses and minuses" to outsourcing. In the video, a host of a panel discussion presses Clinton on the topic, noting that Obama had been condemning outsourcing on the campaign trail.

"You know, it's more directed toward the fear that a lot of Americans who were in manufacturing, who don't feel like they have any other job possibilities because they weren't trained for any other job possibilities," Clinton explained at the time, "so it's a legitimate issue, it needs to be aired, but I think the President has been very clear that he wants to improve our own exports."

Jeff Weaver, Sanders' campaign manager, said in a statement that the video shows that Clinton will say one thing to one audience, and another to the next.

"In the United States she condemns [outsourcing] but when she's in India she says it has benefitted many parts of our country," Weaver said. "Secretary Clinton should explain to the people of Michigan how they have benefited from the outsourcing of their manufacturing jobs."

On a call with reporters ahead of her speech, Clinton senior policy advisor Jake Sullivan described Clinton's commitment to working communities as long-standing, citing her time a senator from New York representing manufacturing bases like Buffalo, Albany and Rochester.

"The same can't be said for her opponent in the Democratic primary, Senator Sanders," he said. "He obviously is talking about manufacturing now...but he still hasn't put forward a manufacturing plan in this campaign. In his years in Congress, he has been AWOL when it comes to putting forward proposals that would lift up American manufacturers."

Sullivan maintained that Clinton has a high bar for trade agreements, and that she believes that NAFTA should be "renegotiated," "updated" and enforcement laws tightened.

"The way we enforce trade rules right now is completely backward," Clinton said here Friday. "We've put the burden of initiating trade cases on workers and unions...the government should be enforcing the law from the beginning, so workers can focus on doing their jobs."

Clinton called China "by far the worst rule-breaker in the world," and cast herself as the best candidate to stand up to Chinese leaders.

"I know first hand that the relationship between our countries is the most complex and consequential in the world," she said, "and the next president is going to need the judgment and experience to steer that relationship in the right direction."

Without naming him, Clinton criticized Sanders for the lack of specificity in his proposals when it comes to creating jobs.

"Anyone running for president owes it to you to come up with real ideas, not an ideology, not an old set of talking points, but a credible strategy designed for the world we live in now," she said.

Sanders, who was campaigning in Illinois on Friday morning, returned to Michigan for two rallies in Traverse City and Allendale later in the day. The two Democratic candidates will meet in just two days for the sixth Democratic debate in Flint.