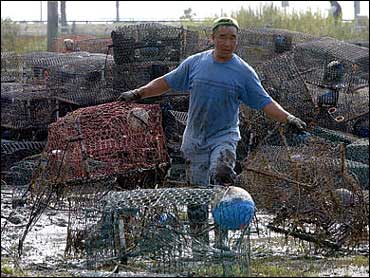 This is a running list compiled by CBSNews.com staffers of the latest developments of Hurricane Rita and the recovery efforts underway on the Gulf Coast. For a look back to fast-breaking events of the Katrina disaster, see our previous blog.

10:42 p.m.
BATON ROUGE, La. (AP) — The mayor of New Orleans says more areas of his city that escaped flooding will be formally reopened starting Thursday. The areas include the French Quarter, the business district, and Uptown with its historic Garden District. Business owners will get to return first. Residents of those areas will be allowed to return on Friday.

Lee Cowan on La. and Texas towns that are still in dire need of relief

Sharyn Alfonsi on defiance, resilience and optimism in New Orleans

John Blackstone on one man with a passion for hurricanes

7:44 p.m.
AVERY ISLAND, La. (AP) — On a salt dome that rises from the Cajun flatlands like an island from the sea, the plant which makes Tabasco was safe from floods caused by Hurricane Rita. And it had enough stock on hand to ship out until the factory regained power.

Many of its workers weren't as lucky.

Their houses flooded, so the company is trying to find them rooms in New Iberia and Lafayette — sometimes hotel rooms, sometimes rooms in someone's house.

Paul McIlhenny, chief executive of McIlhenny Company, said Hurricane Katrina did wind damage to the company's office and museum in a part of New Orleans still under evacuation orders.

The areas include the French Quarter, the Central Business district, and Uptown with its historic Garden District. Business owners will be allowed in on Thursday, and residents on Friday.

5:41 p.m.
WASHINGTON (AP) — Former FEMA director Michael Brown was warned
weeks before Hurricane Katrina hit that his agency's backlogged
computer systems could delay supplies and put personnel at risk
during an emergency, according to an audit released Wednesday.

An internal review of the Federal Emergency Management Agency's
information-sharing system shows it was overwhelmed during the 2004
hurricane season. The audit was released a day after Brown
vehemently defended FEMA for the government's dismal response to
Katrina, instead blaming state and local officials for poor
planning and chaos during the Aug. 29 storm and subsequent
flooding.

It means utilities in Texas will be allowed to enter public and private property to install temporary electric transmission lines.

A utility company executive says some 5,700 workers have been out since Sunday trying to repair power lines damaged by high winds and downed trees. He says priority is being given to hospitals and other emergency facilities.

He couldn't guess when power would be fully restored, but says it could take "several weeks."

Meanwhile, in one rural county north of Beaumont, hundreds of residents are trapped in their homes because they lack the gas needed to reach shelters or food-distribution centers. Dozens more are trapped by fallen trees blocking the one-lane dirt roads.

A local volunteer firefighter says his department has been distributing food and water. He says his crews are tired, but that they won't give up. He reports that FEMA showed up today with more supplies.

2:24 p.m.
PORT ARTHUR, Texas (AP) — Residents of Port Arthur, Texas, say they know who to thank for help in the wake of Hurricane Rita — and it's not the federal government.

In fact, city officials say they couldn't have made it through those first few days after the storm if the oil companies hadn't helped.

Port Arthur's mayor says the next priorities are getting utilities — including water and sewer services — restored. Utility crews from as far away as Arizona and Pennsylvania have been trying to repair telephone and power lines.

11:03 a.m.
(CBS) — CBS News correspondent Bob Fuss reports that at a hearing with governors of Louisiana, Alabama and Mississippi, Republican Senators Charles Grassley and Trent Lott complained the White House is blocking aid to those and other states for Medicaid and providing health care for evacuees from the hurricane.

Lott said this will be done "with the help of the administration or without it."

10:49 a.m.
WASHINGTON (AP) — Louisiana Gov. Kathleen Blanco asked Congress on Wednesday for help in rebuilding her devastated state, saying Hurricanes Katrina and Rita "knocked us down but they did not knock us out."

Blanco said 40 percent of Louisiana's businesses were lost or damaged in the storm and said the state's most pressing need is jobs.

"That's what we need," she said. "That's exactly what we need in the face of this suffering and hardship — jobs."

Sponsors say the moves are needed to address energy system vulnerabilities exposed by Hurricanes Katrina and Rita. They want to build more refineries and tap into the oil and gas resources in the Gulf of Mexico.

But critics say House Republicans are exploiting a tragedy to pursue pro-industry measures that Congress rejected earlier this year.

The Dallas Morning News reports that Hurricanes Katrina and Rita have dealt a mortal blow to Louisiana's $2.6 billion-a-year seafood industry. The damage has heightened uncertainty about an industry that provides 30,000 jobs, half of the shrimp, 26 percent of the crabs, and 37 percent of the oysters in the United States.

6:50 a.m.
(CBS) — Hurricanes are topic No. 1 on Capitol Hill today, at one private meeting by House leaders, and at two different House public hearings and four different Senate public hearings. Louisiana Gov. Kathleen Blanco will testify at the first of the Senate hearings, before the Finance Committee, making a pitch for aid for her state as it tries to clean up and rebuild.

Other highlights: Texas, Mississippi and Louisiana mayors and local officials testifying before the Senate Homeland Security Committee on the needs of Katrina evacuees; a House hearing on the Defense Department's Katrina costs; another House panel examining waste and fraud connected to the cleanup; and a news conference by House Democrats calling for the establishment of a Katrina Commission and a National Energy Strategy.

6:45 a.m.
PORT ARTHUR, Texas (AP) — City officials in Port Arthur, Texas, are hoping their complaints about sluggish aid after Hurricane Rita are being heard. Mayor Oscar Ortiz met yesterday with Gov. Rick Perry but says it still "seems like the larger towns in the news are the ones getting the help."

Ortiz says residents should give it three to five more days before they come home. There probably won't be full power for a month. Port Arthur did get 121 small generators yesterday, but emergency workers get them first, then merchants who provide high-demand products such as gasoline, water and food.

Storm-battered areas that do have power have been getting rolling brownouts as the utility tries to stretch what electricity they have.

6:05 a.m.
ATLANTA (AP) — Georgia school buses are rolling again today after two days in the garage due to Governor Perdue's request that all systems close to conserve fuel. The school closings were intended to save an estimated 500-thousand gallons of diesel fuel in a time of peak demand and relatively short supply.

Perdue suggested the closings on Friday amid concern that Hurricane Rita would damage oil refineries in the Gulf of Mexico along the Texas and Louisiana coasts and possibly cut the state's gasoline supply. Most school systems complied.