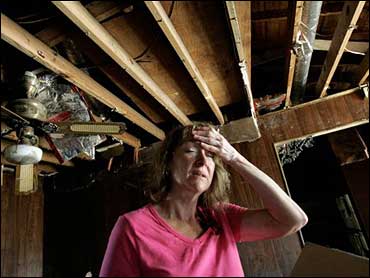 Ladling out bowls of red beans and rice for passers-by in the French Quarter, bar owner Finis Shelnutt buoyantly proclaims over blaring jazz music, "People will come back."

"Oh yeah, we're going to have a helluva time," he says, and plenty of other business owners and residents agree with him.

One month after Hurricane Katrina smashed ashore and swamped 80 percent of New Orleans, there are unmistakable signs of progress.

The electricity is back on in key business districts. A few restaurants are open with limited menus. Gasoline and groceries are available in neighboring communities. Alongside the National Guard Humvees and police cruisers, garbage trucks and vans rumble through town on their way to cleanup and repair jobs.

Streets where corpses floated are nearly dry and cleared of most garbage, and despite new flooding brought last weekend by Hurricane Rita, the Army Corps of Engineers' pumping and repair work has removed nearly all of the water.

The mayor said more areas of the city that escaped flooding, including the French Quarter and the Garden District, will be formally reopened starting Thursday. Business owners will be allowed in first, and then residents on Friday, although many have returned ahead of his timeline.

But CBS News correspondent Sharyn Alfonsi reports that much of

New Orleans is still in shambles (video)
. Businesses are still trying to clean up and reopen, but there is too much trash and no one to pick it up. Hospitals are still closed and far from sterile.

In the city's impoverished Ninth Ward, for example, the neighborhood is all but deserted, with block after block of waterlogged homes and ruined cars. One of the hottest businesses around was St. Claude Used Tires, where a burly, shirtless Joseph Peters patched hundreds of tires punctured by roofing nails and other storm debris.

"I was one of the bad boys who wouldn't leave," he said with a smile. "Now they appreciate me being here."

Even those predicting a Big Easy comeback steer clear of timetables.

"We've never seen this kind of catastrophe before in the United States," said Coast Guard Capt. Tom Atkin, chief of staff for Vice Adm. Thad Allen, the federal official directing the Katrina relief effort. "Katrina had us early, but we're starting to build momentum. It's been an immense challenge. The parishes and the city face a ton of issues."

There are still some 5,000 federal military and 4,000 National Guardsmen in the city, and a long-term presence seems likely. The beleaguered Police Department, whose chief abruptly resigned Tuesday, plans to investigate about 250 of its 1,750 officers for leaving their posts in the first few days after the storm.

There are other immediate problems:

The vast majority of the city remains without power, drinkable water or reliable communications. While the return of lights to the French Quarter was hailed this week, Entergy Corp. says only about 17 percent of the city has power.

There are major health and safety concerns, including gas leaks, mold and structural damage in flooded homes, and toxic sludge left behind by the floodwaters.

With a huge, complex rebuilding job ahead, there are serious questions of leadership, coordination and communication.

"Our local politicians say it's FEMA, FEMA says it's the locals. No one can give us an answer on what to do here. All I want to know is what my options are," fumed Marvin Alberado, a resident of nearby Chalmette whose machine shop and home are deep in oily muck.

The mayor has said he will soon have a commission start developing a plan for the new New Orleans, and civic boosters are talking about putting together an effort to promote the city around the nation.

Nagin has been pushing to get residents back into the dried-out neighborhoods, brushing aside warnings that crucial services are not in place.

"People are saying it's too early to bring back jazz, the gumbo and the red beans," Nagin said. "If it's too early, when is the right time?"

It seems certain that post-Katrina New Orleans will be a smaller city, with a less diverse economy.

Loren Scott, an economist and Louisiana State University professor emeritus, expects the port-related businesses, including petrochemical and shipping industries, to bounce back, and said that tourism will eventually rebound, too.

But many service-related businesses will probably not be able to hold out during the long rebuilding.

Kent Koerkel, who owns a furniture store, wondered where he will get the customers to survive. "This was not a small town," he said. "I'm seriously wondering if enough people will come back to have an economy."

The city of some 475,000 pre-Katrina residents could lose more than a fourth of its population, by some estimates. With such uncertainty here, many New Orleans residents who were evacuated after Katrina may settle where they are, rather than return.

Brandon Page, 25, said he interviewed for jobs while staying in Atlanta, then returned to New Orleans to work on his damaged house. He works for a market research firm whose prospects are hazy.

"I'll clean up here and then decide if I need to relocate for a job," Page said. "I've got a big decision."

Historian Douglas Brinkley, a Tulane University professor, predicted the rebuilt New Orleans will be largely gentrified, centered around the French Quarter and arts district, filled with townhouses and tourist lures. Along the way, it may lose some of its funky traditions and lowbrow charm, becoming more like Charleston, S.C., or Santa Fe, N.M., he said.

"The bottom line is it will not be the city it once was," he said.