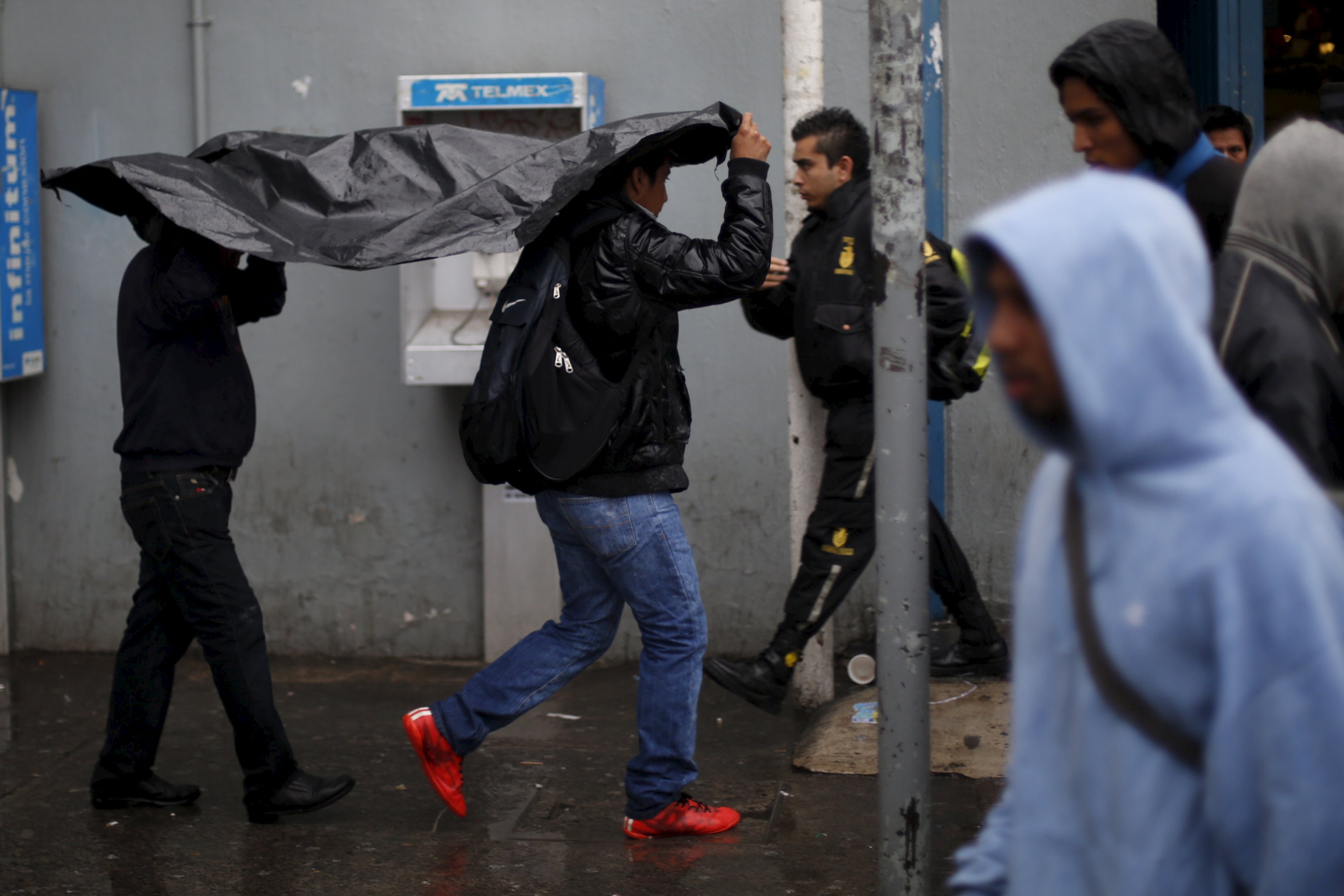 PUERTO VALLARTA, Mexico -- Hurricane Patricia roared ashore in southwestern Mexico as a Category 5 storm Friday evening, bringing lashing rains, surging seas and cyclonic winds hours after it peaked as one of the strongest storms ever recorded.

There were early reports of some flooding and landslides as the storm moved over inland mountains after nightfall. Television news reports from the coast showed some toppled trees and lampposts and inundated streets. Milenio TV carried footage of cars and buses being swept by floodwaters in the state of Jalisco.

But authorities said there were no immediate reports of fatalities or the kind of major, widespread damage feared earlier in the day when forecasters warned of a potentially "catastrophic" landfall.

Early Saturday, the U.S. National Hurricane Center had downgraded the storm to a Category 2 with sustained winds of 100 mph. Its center was about 135 miles southwest of Zacatecas, Mexico.

"The first reports confirm that the damage has been less than those expected from a hurricane of this magnitude," President Enrique Pena Nieto said in a taped address late Friday. He added, however, that "we cannot yet let our guard down."

Indeed, Patricia's projected path was headed next over a mountainous region dotted with hamlets that are at risk for dangerous mudslides and flash floods, and where communications can be sketchy. It wasn't clear when emergency crews would be able to fully assess the storm's impact in those isolated areas.

The storm was expected to continue weakening and dissipate Saturday, but it was still capable of soaking the region with heavy rain.

CBS News reporter Adrienne Bard reported the storm could drop 15 inches of rain in the next 24 hours, and trigger waves of up to 30 feet along the coast.

Patricia's center made landfall as a monstrous Category 5 hurricane with maximum sustained winds of 165 mph, but in a relatively low-populated stretch of the Jalisco state coast near Cuixmala. The nearest significant city, Manzanillo, was about 55 miles southeast and outside the zone of the storm's hurricane-force winds.

Brandie Galle, a tourist from Grants Pass, Oregon, said she sheltered with other guests in a ballroom with boarded-up windows at the Hard Rock Hotel in Puerto Vallarta. Workers let them out to eat in a hotel restaurant after the city was not feeling any major effects from the storm two hours after landfall. There was no visible damage to the building.

Galle said some guests desperate to leave had earlier paid $400 for taxis to drive them the 120 miles to the inland city of Guadalajara.

Patricia formed suddenly Tuesday as a tropical storm and quickly strengthened to a hurricane. Within 30 hours it had zoomed to a record-beating Category 5 storm, catching many off guard with its rapid growth.

By Friday it was the most powerful hurricane on record in the Western Hemisphere, with a central pressure of 880 millibars and maximum sustained winds of 200 mph, according to the National Hurricane Center.

Patricia's power while still out at sea was comparable to that of Typhoon Haiyan, which left more than 7,300 dead or missing in the Philippines two years ago, according to the U.N.'s World Meteorological Organization. More than 4 million people were displaced and over 1 million houses were destroyed or damaged in 44 provinces in the central Visayas region, a large cluster of islands.

Mexican officials declared a state of emergency in dozens of municipalities in Colima, Nayarit and Jalisco states, and ordered schools as many residents stocked up on canned food and other supplies. Authorities opened hundreds of shelters and sent thousands of emergency crews to aid people.

One of the worst Pacific hurricanes to ever hit Mexico slammed into the same region, in Colima state, in October 1959, killing at least 1,500 people, according to Mexico's National Center for Disaster Prevention.

The Sokols, a family of five from suburban Detroit, were supposed to fly out of Puerto Vallarta on Friday but ended up hunkering down for hours in a shelter at a university after their flight was canceled. By night they were back where they began: at their hotel, and no worse for wear.

"It's amazing it went from the worst in history to just some heavy rain," Susanna Sokol said, noting that at least the hurricane gave her daughter a birthday to remember.

Earlier in the day, Roberto Ramirez, director of Mexico's National Water Commission, which includes the nation's meteorological service, said Patricia's winds could be powerful enough to lift automobiles, destroy homes not sturdily built with cement and steel, and drag anyone caught outside.

A steady rain fell in Puerto Vallarta in the early evening, but there was no sign yet of the storm's vicious winds. Streets were deserted except for police patrolling slowly with their emergency lights on.

Civil protection officials warned that past hurricanes have filled the city's streets with water, sand and flying projectiles.

"We need people to understand the magnitude of the hurricane," Interior Secretary Miguel Angel Osorio told Radio Formula. "It is a devastating hurricane, the biggest one ever registered."

At the shelter in Puerto Vallarta, Wendi Mozingo of Austin, Texas, and six family members sat on folding chairs after being ordered out of their beachfront vacation rental home by managers of the property. They brought a few changes of clothes and left everything else behind.

The family was supposed to depart Puerto Vallarta on Tuesday, but now, Mozingo said, "We're leaving as soon as we can."

"It was pretty stressful for a while," Tom Sokol said. "I felt guilty for taking my kids here."

U.S. State Department spokesman Mark Toner said tens of thousands of American citizens were believed to be vacationing or living in areas likely to be affected by the storm.

The airports in Puerto Vallarta, Manzanillo and Tepic were closed Friday, but officials announced an air bridge Saturday to ferry stranded travelers out of areas hit by the storm.

Patricia also threatens Texas, with forecasters saying that even after the storm breaks up, its tropical moisture will likely feed heavy rains already soaking the state.

The U.S. National Weather Service said a flash flood watch would be in effect through Sunday morning for Dallas-Fort Worth, Austin and San Antonio.

A coastal flood warning was in effect through Friday night in Corpus Christi. Galveston was under a coastal flood advisory until Saturday night.