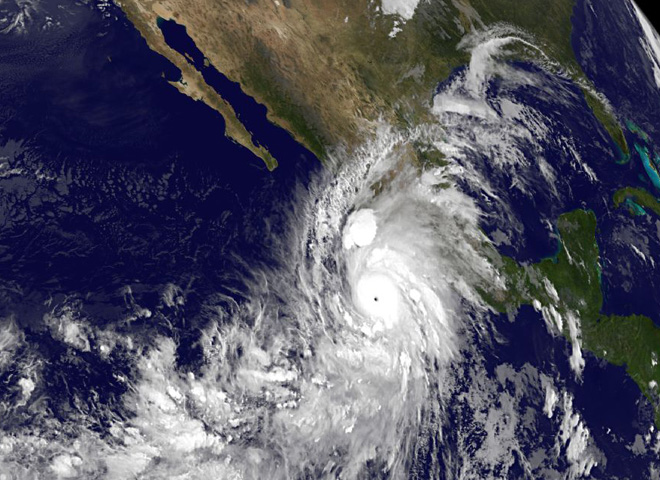 MANZANILLO, Mexico -- Hurricane Patricia headed toward southwestern Mexico Friday as a monster Category 5 storm, the strongest ever in the Western Hemisphere that forecasters said could make a "potentially catastrophic landfall" later in the day.

Residents of a stretch of Mexico's Pacific Coast dotted with resorts and fishing villages on Thursday boarded up homes and bought supplies ahead of Patricia's arrival.

With maximum sustained winds near 200 mph, Patricia is the strongest storm ever recorded in the eastern Pacific or in the Atlantic, said Dave Roberts, a hurricane specialist at the U.S. National Hurricane Center.

Astronaut Scott Kelly tweeted a photo of the hurricane from space:

Patricia's power was comparable to that of Typhoon Haiyan, which left more than 7,300 dead or missing in the Philippines two years ago, according to the U.N.'s World Meteorological Organization.

In Mexico, officials declared a state of emergency in dozens of municipalities in Colima, Nayarit and Jalisco states that contain the bustling port of Manzanillo and the posh resort of Puerto Vallarta. The governor of Colima ordered schools closed on Friday, when the storm was forecast to make what the Hurricane Center called a "potentially catastrophic landfall."

Evacuations were under way in Puerto Vallarta Friday, with officials taking people to 14 shelters, mostly in schools, according to the Jalisco government's webpage. Exact numbers of those evacuated were not immediately available.

Luis Felipe Puente Espinosa, national coordinator for civil protection, said that three airports in the path of Patricia in southwestern Mexico have been shut down as the storm approaches.

Roberto Ramirez, the director of Mexico's National Water Commission, which includes the nation's meteorological service, said that Hurricane Patricia will be powerful enough to lift up automobiles, destroy homes that are not sturdily built with cement and steel and will be able to drag along people caught outside when the storm strikes.

Ramirez said that the people in the most danger from the hurricane will be those on the coast, especially in the state of Jalisco.

At a Wal-Mart in Manzanillo, shoppers filled carts with non-perishables as a steady rain fell outside.

Veronica Cabrera, shopping with her young son, said Manzanillo tends to flood with many small streams overflowing their banks. She said she had taped her windows at home to prevent them from shattering.

Alejandra Rodriguez, shopping with her brother and mother, was buying 10 liters of milk, a large jug of water and items like tuna and canned ham that do not require refrigeration or cooking. The family already blocked the bottoms of the doors at their home to keep water from entering.

Manzanillo's "main street really floods and cuts access to a lot of other streets. It ends up like an island," Rodriguez said.

In Puerto Vallarta, restaurants and stores taped or boarded-up windows, and residents raced to stores for last-minute purchases ahead of the storm.

The Hurricane Center in Miami warned that preparations should be rushed to completion, saying the storm could cause coastal flooding, destructive waves and flash floods.

Feltgen said Patricia also poses problems for Texas. Forecast models indicate that after the storm breaks up over land, remnants of its tropical moisture will likely combine with and contribute to heavy rainfall that is already soaking Texas independently of the hurricane, he said.

"It's only going to make a bad situation worse," he said.

In Colima, authorities handed out sandbags to help residents protect their homes from flooding.

Patricia's maximum sustained winds had increased to 200 mph - a Category 5 storm, the highest designation on the Saffir-Simpson scale used to quantify a hurricane's wind strength.

By late afternoon, Patricia's center was about 60 miles west of Manzanillo, and about 110 miles south-southeast of Cabo Corrientes. The Hurricane Center said Patricia was expected to remain an "extremely dangerous" Category 5 storm through landfall late afternoon or evening, before weakening over the inland mountains.

The Hurricane Center said Patricia was expected to bring rainfall of 6 to 12 inches, with isolated amounts of up to 20 inches in some locations. Tropical storm conditions were expected to reach land late Thursday or early Friday, complicating any remaining preparation work at that point.

"We are calm," said Gabriel Lopez, a worker at Las Hadas Hotel in Manzanillo. "We don't know what direction (the storm) will take, but apparently it's headed this way. ... If there is an emergency we will take care of the people. There are rooms that are not exposed to wind or glass."