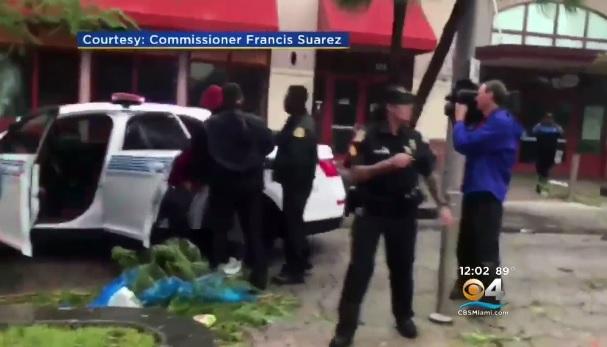 MIAMI -- Miami police on Tuesday warned looters -- and potential looters -- that "they will get caught" as the city recovers from Hurricane Irma.

CBS Miami reports that police said they arrested at least 19 people linked to burglaries around the city, including six who were caught in three incidents in the center of the city.

Deputy Chief Luis Cabrera said at a press conference: "My message is: Don't do it, we're out there ... if you do it, you're going to get caught."

"I think it's despicable that anyone would try to take advantage of the fact that we're in a vulnerable state," said Commissioner Francis Suarez.

CBS Miami reporter Hank Tester rolled up on a man just as he exited from the smashed storefront at Simon's Sports Store.

An anonymous caller alerted police as a group unloaded boxes of shoes and clothing from their vehicles and into a home, CBS Miami writes.

When an officer arrived and began speaking with the building's manager, she said noticed 18-year-old Sebastian Michel Jean-Baptieste walk up with a gym bag and interact with three other suspects at the home.

The officer questioned Jean-Baptieste about what was in the bag, and said they discovered shoes and clothing with Foot Locker labels still attached. Police said Jean-Baptieste told them he bought the items from a "crackhead" and admitted that he knew they were stolen.

At Tuesday's press conference, Miami Police displayed the stolen items that were recovered and thanked the public for their help catching these suspects.

"Without these tips, we would not have been able to arrest these individuals," said Cabrera said.

Miami Mayor Tomas Regalado said in times of emergency, police were out and ready to take action.

Jean-Baptieste was charged with dealing in stolen property. Three others identified in the arrests were Wildes Pierre, 22, Franco Lous, 20, and Roland Aguirre, 19.