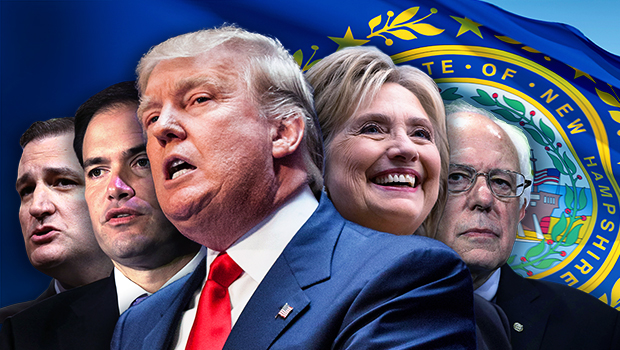 On Tuesday, New Hampshire voters will show up to the polls across the state to cast ballots in the first-in-the-nation primary for their preferred Democratic or Republican presidential candidate.

Polls open across the state at either 6 or 7 a.m. ET and the last polls close at 8 p.m. ET, with some closing earlier, at 7 p.m. ET. In addition to the candidates listed above, there are a number of other candidates who will appear on the ballots. In total, 30 Republicans will be listed on the GOP ballot and 28 people will appear on the Democratic ballot. It only requires $1,000 to get on the ballot.

Unlike the Iowa caucuses where there were complicated rules involved, New Hampshire's primary is more straightforward: voters cast anonymous ballots.

New Hampshire is a critical state because of independents voters. While registered Democrats and Republicans vote in their respective party's primary, independent voters can also participate in the presidential primary, but they must choose a Democratic or Republican ballot.

The three top finishers in the Iowa Republican caucuses -- Cruz, Trump and Rubio -- are looking to hold on to their momentum.

The survey also found 58 percent of voters said they support Sanders and 35 percent back Clinton.

On Saturday night, the top seven GOP contenders faced off in ABC News' debate in Manchester. The governors did well while Rubio had a hard time. The Florida senator repeated the same rehearsed line about President Obama four times, which New Jersey Gov. Chris Christie kept pointing out. Marco Rubio told "CBS This Morning" on Monday that he felt "great" about his debate performance.

Trump, meanwhile, has intensified his attacks against former Florida Gov. Jeb Bush. He told "CBS This Morning" on Monday that Bush "melts like butter" every time he attacks Trump.

Just like all of the GOP contenders, Clinton and Sanders continued to lobby for New Hampshire voters' support over the weekend. Clinton, who won the New Hampshire primary in 2008, tried to win over more young and undeclared voters. Sanders also appeared on NBC's "Saturday Night Live" with comedian Larry David.

→ Where: Across New Hampshire