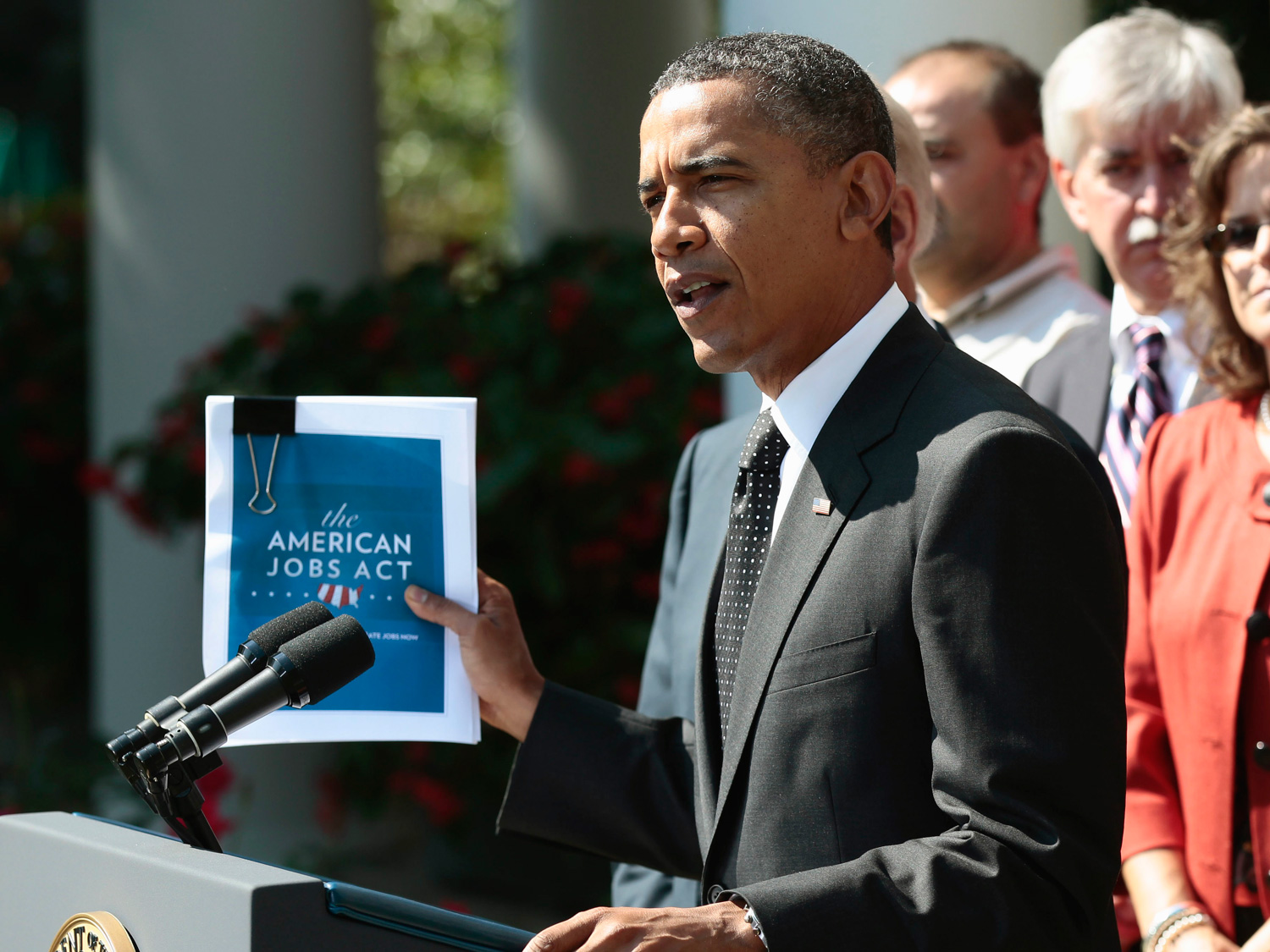 President Obama on Monday spelled out how he would pay for his $447 billion jobs bill, and he wants corporations and the wealthiest Americans to pay for just about all of it.

Mr. Obama unveiled the jobs plan, which was larger than most expected, before a joint session of Congress on Thursday and has been busy promoting it since. From the White House Rose Garden Monday morning, the president presented the legislative language for his proposal and appealed to Congress to pass it immediately -- with "no games, no politics, no delays."

Given the concern in Congress this year over deficit spending, Mr. Obama has insisted every penny of his plan will be paid for over time. The tax changes the White House unveiled today have been pushed in the past without success. They include:

-- A limit on itemized deductions and certain exemptions for individuals who earn over $200,000 and families earning over $250,000. That limitation would raise roughly $400 billion over 10 years.

-- Treat carried interest -- that's the interest earned by investment fund managers -- as ordinary income, rather than taxing it at the capital gains rate. That would raise $18 billion.

-- Policy changes to a number of oil and gas provisions, revoking their special status, which collectively raise $40 billion.

-- A change to the corporate jet depreciation rule so that corporate jets are depreciated over seven years, like commercial jets, rather than five years. That raises $3 billion.

These proposals are part of the bill, dubbed the "American Jobs Act," that Mr. Obama is sending to Congress today. If Congress passes the bill, the tax changes would go into effect in January 2013, about two months after voters decide whether Mr. Obama will remain in power for a second four-year term. Mr. Obama will also include the tax proposals in a larger plan for long-term deficit reduction that he plans to unveil next week.

Jack Lew, the director of the Office of Management and Budget, told reporters today that the president's deficit reduction plan will exceed the target that must be met by the so-called "super-committee" -- a group of 12 bipartisan congressmen tasked with finding at least $1.2 trillion in budget savings by Thanksgiving. The "super-committee" was formed earlier in the year as part of the deal to raise the debt ceiling.

House Speaker John Boehner's office quickly dismissed the plans, noting that Mr. Obama failed to get these tax changes passed when he pushed for them in 2009, when Democrats controlled both the Senate and the House.

"We remain eager to work together on ways to support job growth, but this proposal doesn't appear to have been offered in that bipartisan spirit," Boehner's spokesman Michael Steel said in a statement.

Lew today rejected the notion that the tax changes would hurt job growth. "The kinds of provisions that we are talking about changing we don't believe will cause any kind of a reduction in economic activity or job loss," he said. "So just in terms of the substance of these policies, we're very comfortable that they're consistent with economic growth."

When asked about whether it's realistic to think Congress would adopt the White House's proposals, Lew said, "We think the American people will think this is the right package, but it's our offer as to what the right way to pay for it is. We think Congress should take it up and pass it."