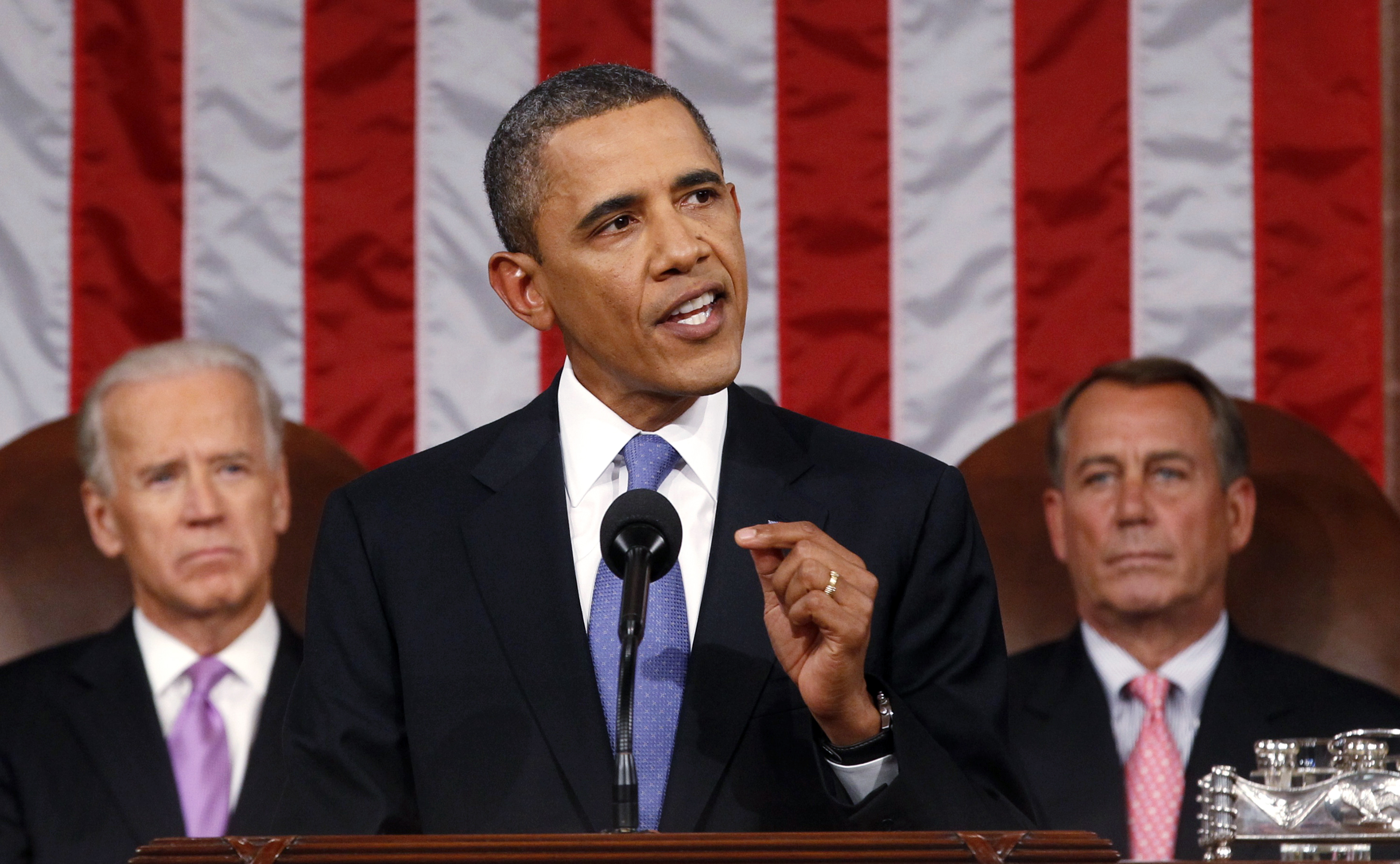 Urging Congress to "stop the political circus," President Obama on Thursday night called for immediate action on a $447 billion package of spending initiatives and tax cuts designed to jump-start the stalling economy.

"The people of this country work hard to meet their responsibilities. The question tonight is whether we'll meet ours," Mr. Obama said in a fiery speech before a rare joint session of Congress. "The question is whether, in the face of an ongoing national crisis, we can stop the political circus and actually do something to help the economy."

In the face of the worst recovery from a recession in the nation's history, a stubborn unemployment rate hovering around 9 percent and zero job growth in the month of August, the pressure is on the president to take action. The challenges remain daunting, however, as Republicans in Congress are taking a combative stance against the president's policies, with 14 months to go before the 2012 elections.

Dubbed the "American Jobs Act," the plan Mr. Obama is sending to Congress is larger than many expected. More than half of the plan is tax cuts for working Americans and small businesses. It also includes spending initiatives in areas like infrastructure. While a package that costs hundreds of billions may be hard to swallow for a Congress that's been more focused this year on deficit reduction, the president is signaling to Republicans that they're also responsible for the poor economy.

WH lays down jobs speech as challenge to GOPObama's jobs plan: Can he create enough jobs to save his own?Boehner: Most people prefer football to politicsObama's Speech: What are the Best Policies to Help the Unemployed?

"Some of you have decided that [our] differences are so great that we can only resolve them at the ballot box," Mr. Obama said. "But know this: the next election is 14 months away. And the people who sent us here - the people who hired us to work for them - they don't have the luxury of waiting 14 months."

But while he said the current economic crisis transcends politics, the president warned Republicans that he's taking his message to the voters: "This plan is the right thing to do right now. You should pass it," he said. "And I intend to take that message to every corner of this country."

"You should pass this bill right away," Mr. Obama repeated throughout his speech, conveying a strong sense of urgency.

The president argued that his plan is fully comprised of ideas that have in the past gained bipartisan support.

"For everyone who speaks so passionately about making life easier for 'job creators,' this plan is for you," Mr. Obama said, listing the benefits for small businesses his plan includes.

Furthermore, the president insisted every idea in his bill will be paid for. Mr. Obama said he will ask a newly-formed congressional "super committee" to formulate a plan to pay for his proposals. The president added that a week from Monday, he'll release a more ambitious deficit plan -- "a plan that will not only cover the cost of this jobs bill, but stabilize our debt in the long run," he said.

The "super committee" was formed as part of a deal to raise the debt ceiling, and the bipartisan group of 12 is already tasked with finding $1.5 trillion in federal budget savings by Christmas. Its initial task is challenging enough, so it's unclear whether they could ramp up their mission to pay for the president's plan.

Mr. Obama is asking for an extension of the payroll tax cut set to expire at the end of the year. While some Republicans have pushed back on that idea, Mr. Obama said tonight, "Fifty House Republicans have proposed the same payroll tax cut that's in this plan. You should pass it right away." The president is also asking Congress for another extension of jobless benefits, at a cost of about $50 billion. The president is also calling for a major school construction and infrastructure renovation projects to the tune of $100 billion.

"There are schools throughout this country that desperately need renovating," Mr. Obama said. "How can we expect our kids to do their best in places that are literally falling apart? This is America. Every child deserves a great school - and we can give it to them, if we act now."

The president's plan also includes requests for a tax write-off for business investments, tax credits for businesses that hire veterans, and a $4,000 tax credit for businesses that hire anyone who has spent more than six months looking for a job. It also includes aid for state and local governments to keep public workers like teachers on the payroll, among other ideas. "Pass this jobs bill, and thousands of teachers in every state will go back to work," Mr. Obama said.

After the speech, some Republican leaders gave a cautiously optimistic response.

"The proposals the President outlined tonight merit consideration. We hope he gives serious consideration to our ideas as well," House Speaker John Boehner said in a statement. "It's my hope that we can work together to end the uncertainty facing families and small businesses, and create a better environment for long-term economic growth and private-sector job creation."

"There's a lot of the president's speech tonight I think we could agree on," House Majority Leader Eric Cantor said on the CBS Evening News following the speech. He added, "We reject the all-or-nothing approach the president took tonight," but he hopes Congress can "peel off" proposals Republicans like and "put those on the floor as soon as possible... so we can see the economy start to grow again."

GOP leaders did not fully embrace the plan, however, and some were more forceful in their criticism of the president's plan.

"Saying that something is 'paid for' isn't enough," Sen. Jeff Sessions of Alabama, the top Republican on the Senate Budget Committee, said in a statement. "America desperately needs the competent, coherent, and concrete fiscal plan that the president remains unwilling to deliver."

Mr. Obama will take his pitch for new stimulus on the road this week, starting with a visit to the University of Richmond on Friday. Next Tuesday, he'll travel to Columbus, Ohio.