Melody Gardot, a performer with fans around the world, has a personal story full of tragedy and comeback. With Anthony Mason this morning we TAKE NOTE:

Her sultry voice has made Melody Gardot an international sensation. Her latest album, "My One and Only Thrill," has dazzled critics in the U.S., and sold more than half a million copies in Europe.

It's Number One on a key French chart this week . . . ahead of the Black Eyed Peas.

"What is it with you and the French?" Mason asked the singer.

"I'm glad that question is about France and not about a man," she laughed. "The country, I love it so, and it loves me back the same way, you know?"

They do share a taste for glamour, as evidence by her pretty wild shoes:

"These are like Corvettes," she said. "I don't drive so well. So instead of collecting cars, you could say I collect shoes."

Not the most practical footwear for a singer who at 25 needs to walk with a cane.

"I went to the school of hard knocks. I don't mess around."

Six years ago, as a college student in Philadelphia, she was riding her bike through an intersection, when a Jeep ran a red light:

"And the next thing is, I remember I heard this sound, and I thought, 'Who is that? What is that?' And I realized that it was me screaming."

"Well, I'm buckled up inside,
Miracle that I'm alive"

The accident fractured her pelvis, damaged her spine, and Gardot suffered a traumatic brain injury that affected her memory, her speech, and left her hypersensitive to light and sound.

"My mother dropped a dish on the floor one day and the sound made me collapse," Gardot said. 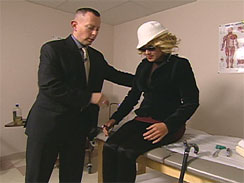 (CBS)
The prognosis at the University of Medicine and Dentistry of New Jersey was not good. When he first saw her, Dr. Richard Jermyn didn't think she would recover. "I had hope," he said. "And as I told Melody at the time, I said 'Your brain is like a computer. And your computer's still intact. Your hardware, your memory, it's there. You can't access it.'

"That's what a brain injury does - It takes your ability to access that away."

Therapy and drugs had failed. In desperation, Dr. Jermyn suggested Melody try music. (She had played piano in college.)

"It's a different part of your brain that perceives music," said Dr. Jermyn, who recalled Gardot returned to him to say, '"The music is there.'"

Gardot never gave up. Slowly . . . it would take years . . . music therapy began to rebuild the neural pathways in her brain.

"How did that grow into what you're doing now?" Mason asked.

"That is almost a question for God," she said.

From the wreckage of the accident, a musical career was born. When her songs were posted on MySpace in 2006, word quickly spread.

She said when she went onstage, "the first maybe half a dozen times experiencing this, that was the only 30 minutes in my life that I did not feel pain for that moment. And it was addictive." 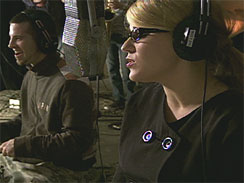 (CBS)
She still has to wear dark classes because of her sensitivity to light, and carry the cane to counter occasional attacks of vertigo. But she wears her disability with style.

On the day we visited with her, Melody heard, off-camera, that her album had gone double platinum in France, prompting a scream of delight. She's sold 200,000 copies there:

"Do you consider yourself a Philadelphian?" Mason asked.

"Yeah, well, platinum'll do that to ya." Mason laughed.

The French word for it is "Renaissance" - a rebirth. It's as if Melody Gardot has been born again.