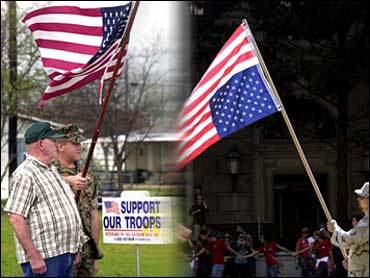 Just two days to go to Election Day ... a day for doing our patriotic duty by exercising our franchise, by voting for the candidates of our choice. We hear a lot of competing claims about patriotism during campaign years - which makes it our patriotic duty to try to sort them out. Our Cover Story is reported by Martha Teichner:

The dictionary definition of patriotism is "love for or devotion to one's country." That's all simple ... deceptively simple.

"You can disagree but you need to do so in the right way," was another opinion.

"Love your country, and what it stands for," was another.

In reality, there may be no more loaded concept in the American political lexicon.

Think about it: On Tuesday, voters will not only be choosing between candidates. Americans will be deciding who captures the flag (or flag lapel pin).

The election will be a referendum on patriotism, one of campaign '08's central and most contentious issues.

"It is worth considering the meaning of patriotism because the question of who is or is not a patriot all too often poisons our political debates in ways that divide us rather than bring us together," said Sen. Barack Obama.

Recent U.S. history has plenty of examples of such division.

"It has roots actually in the 1930s and the 1940s, and some of the debates over communism and domestic communist influence," said William Galston, now at the Brookings Institution in Washington, D.C. He served as a policy advisor to Bill Clinton, Al Gore and Walter Mondale.

"It wasn't a question of one party or the other," Galston said. "It was President Truman, after all, who revived the idea of loyalty oaths and the legitimacy of imposing them" … a Democratic president.

Then there was Republican Senator Joseph McCarthy. His extremist views of loyalty and patriotism made his name synonymous with the political witch hunts of the 1950s.

But, according to Galston, the ideological chasm that defined the Vietnam era is still echoing in today's politics.

"We are still fighting the Vietnam War as a people, as a culture, absolutely," he said. "Some of the issues on the table are the direct lineal descendants and reflections of the controversies that broke out in the late 1960s over war and peace, over race, and over culture.

Like it or not, those debates are still with us."

Each side's arguments have hardened over time and become weapons in partisan battles. Consider the damage the Swift Boat Veterans for Truth did to Senator John Kerry's presidential ambitions in 2004 over the question of his patriotism.

"It was used against John Kerry when people tried to kind of suggest that John Kerry disrespected the American Military because he had been very, quite harshly critical of some of the things that the military had done in Vietnam," said Peter Beinart, senior fellow at the Council on Foreign Relations.

"Democrats and liberals tend to think about patriotism in terms of America's promise, in terms of America's ongoing struggle to become a better nation," Beinart said. "I think for conservatives by and large, patriotism has to do with reverence towards the past, the idea that ritual, flying the flag, putting [on] a flag lapel pin is a vehicle to deeper meaning, whereas I think liberals often tend to believe that ritual is a substitute for deeper meaning."

There is evidence supporting Beinart's view. According to a recent Gallup/USA Today poll, 36% of Republicans think wearing that flag pin indicates someone is patriotic, compared to 26% of Democrats. Saying the pledge of allegiance? Two out of three Republicans (67%) think that's patriotic. Not even half (48%) of Democrats do.

But partisanship aside, in a 33-country survey of national pride, conducted by the National Opinion Research Center, Americans ranked among the highest, which would explain that lump in the throat, that tear in the eye when "The Star Spangled Banner" is played, and when it's flown.

"I do not stand for the National Anthem at sporting events," said Steven Johnston. "I remain seated. And I have been doing this since college. And the reaction is hostile."

Johnston teaches political theory at the University of South Florida. He is outnumbered, but not alone, in believing that patriotism is actually a bad thing - harmful to democracy.

"Sooner or later, you get to the ultimate test, that the only way that you can definitively prove in any sense that you do in fact love your country is, are you willing to die for it? Are you willing to sacrifice life for it - both yours and others' as well?"

To Johnston, the Vietnam Memorial in Washington, D.C., only reinforces his position.

"Even though some people were willing to give their lives to the country in protesting the war, they would not be considered Vietnam Veterans," he said on a visit to the memorial. "They would not be eligible for inscription."

"The terribleness of patriotism is if you define it as love of country, just simply that, with the readiness to kill and die, 'My country, right or wrong,' millions have been sacrificed on the altar of that idol," said George Kateb, professor emeritus of politics at Princeton University.

Kateb rejects what he sees as the inevitable military component to patriotism.

"We wouldn't have enemies unless our enemies were also patriotic," he said. "I would prefer a world in which the general sense among everybody was, no, that's not how we try to work for the benefit of our particular society, not by a pumped up, trumped up, inflated feeling, constantly demonstrated often with bluster and meanness, 'I love my country.' Well, prove it … prove it by trying to make it better rather than making it a more efficient military machine."

Remember our Gallup poll? It found that 87% of Americans believe that serving in the military is patriotic.

But even more … 95% … say that voting is patriotic, indicating the public's definition of patriotism is broad.

On a visit to the National Museum of Patriotism, founder Nick Snider showed Teichner a medallion of civil rights pioneer Rosa Parks.

"Anyone who could not associate building a better America with what this woman has done, I can't help them no matter what I do," he said.

Someone who builds a better America: that's his definition of a patriot.

Four years ago Snider, a retired UPS executive, opened the multi-million dollar, not-for-profit, museum, which is in the process of moving to new quarters in downtown Atlanta.

Why did he feel the need for such a museum?

"That's pretty emotional issue to me. I think we truly have the greatest country in the world, but I see slippage," he said. "So I went home one day and I said to my wife, 'I'm going to do a museum,' and of course she put her head back, as all wives do, and rolled her eyes."

Building on his own collection of wartime, military sweetheart jewelry, Snider was not a man to be deterred.

"I think we'd be in serious trouble without patriotism," he said. "I think it's the DNA that makes America so unique. I consider it the glue that holds us together.

"The beautiful thing about patriotism is, it's everybody's!"

Even if, between now and Tuesday, Republicans and Democrats might try to convince the American public otherwise.

Making phone calls to the departed