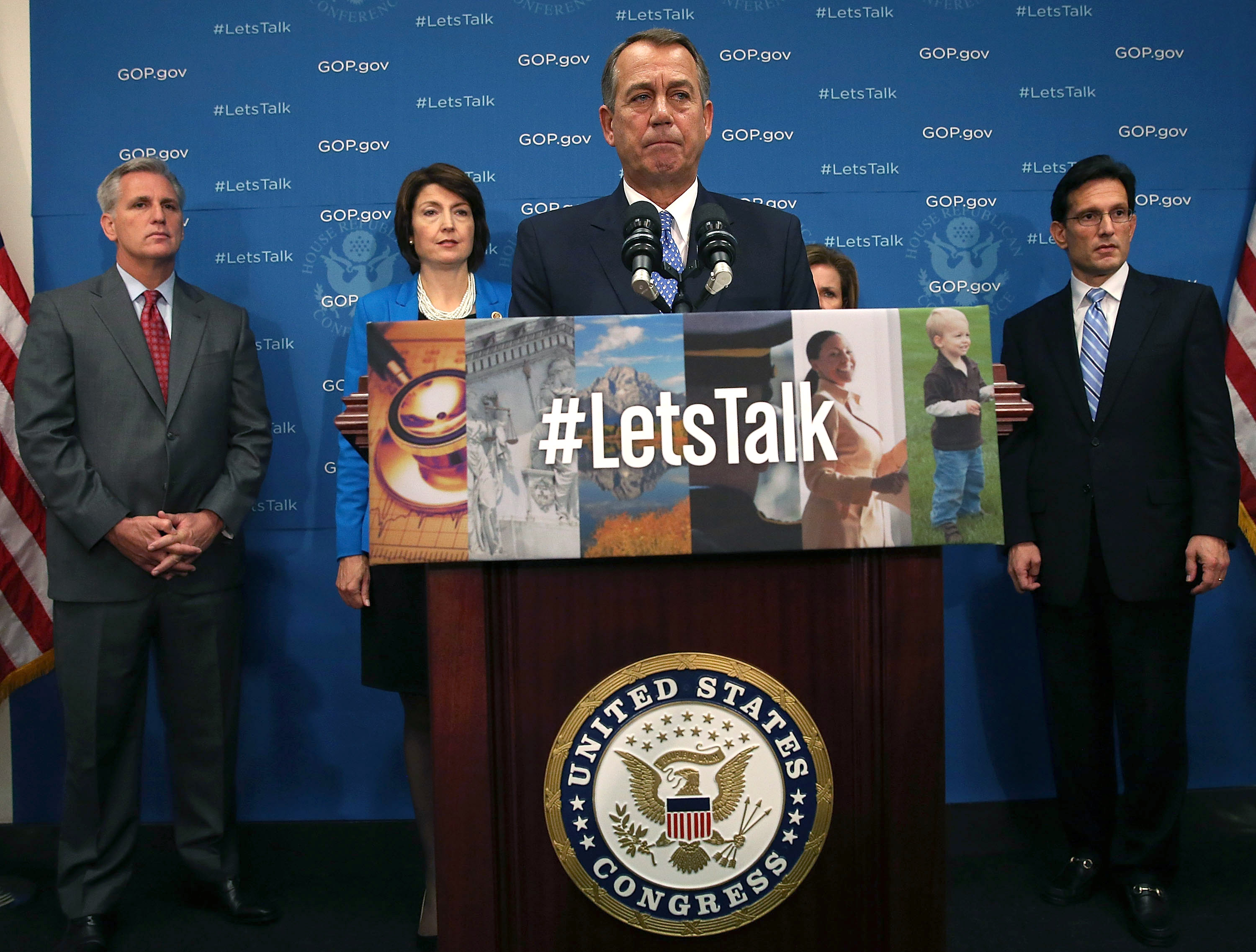 Whether a House GOP proposal to lift the U.S. borrowing limit for six weeks results in a deal to avert a default will hinge on whether the White House and Senate Democrats are willing to decouple the debt ceiling from the government shutdown.

After Senate Democrats met with President Obama this afternoon, the answer from Senate Majority Leader Harry Reid was, "it's not going to happen."

"Let's wait and see what the House does," Reid said. "When they send us something, we'll look at it as clearly and as closely as we can, under the same determination that we've made: Open the government. There is so much pain and suffering that's there. It's really tear-jerking, to say the least. And so we want the government open. We want to be able to pay our bills. "

During the daily press briefing, White House spokesman Jay Carney indicated that President Obama will likely sign a short-term debt ceiling extension being offered by Republicans, but would prefer a longer-term measure accompanied by a reopening of the government as well.

"The president is happy that cooler heads at least seem to be prevailing in the House, that there at least seems to be a recognition that default is not an option," Carney said, offering the caveat that the White House has not seen an actual proposal from the House GOP. But, he added, "The president strongly prefers a longer term resolution, so that we can get away from this periodic brinkmanship."

The White House is still calling on House Republicans to reopen the government as well as raising the debt ceiling. "He wants congress to fulfill both of its responsibilities," Carney said.

House Minority Leader Nancy Pelosi, D-Calif., wasn't as optimistic as the White House, saying a six-week lifting of the debt ceiling "is not the right way to go."

"I think we should go at least one year so that there is some certainty in the markets and that every six weeks people don't have to wonder if the United States of America is going to stand by its full faith and credit," Pelosi said." But nonetheless, nonetheless, let's see what they have to offer."

During a conference meeting Thursday morning, the House Republican leadership presented a plan to increase the debt limit for six weeks -- the first sign of legislation that might head off a default when the U.S. exhausts its borrowing authority on Oct. 17.

GOP aides said House Speaker John Boehner, R-Ohio, is presenting a "clean" bill - free of any other policy conditions - that would increase the borrowing limit until Nov. 22 in order to allow time for broader negotiations on a debt-reduction strategy and separate fights over the government shutdown and raising the debt ceiling. Aides later told CBS News that a vote could come as early as tomorrow, and that it would also bar the Treasury Department from using "extraordinary measures" to keep borrowing once they have reached the limit in order to put pressure on both sides to negotiate within the six-week time frame.

Speaking to reporters after the meeting, Boehner called the proposal a "move half way to what [President Obama] has demanded."

If the legislation is free of any other policy conditions, it could get through the Democrat-controlled Senate and the White House. Democrats have repeatedly said they will not begin negotiating a larger budget deal until Republicans pass legislation to reopen the government and increase the debt ceiling.

At a press conference earlier this week, Mr. Obama indicated his willingness to accept a short-term increase. "If they can't do it for a long time, do it for the period of time in which these negotiations are taking place," he said of the GOP.

House Republicans gathered Thursday morning ahead of a meeting with the White House to discuss the standoff. House Republicans announced that they would only be sending a small group of negotiators for their meeting Thursday, consisting of the elected leadership of the House GOP and a few committee chairmen, rather than the entire conference.

Mr. Obama is also slated to meet with Senate Democrats on Thursday, and their Republican counterparts on Friday. Like Boehner, Senate Minority Leader Mitch McConnell, R-Ky., is also warning the meeting will be unproductive if the president refuses to negotiate.

The meeting, McConnell said, is a good start, "but only if it means he's decided to drop his refusal to negotiate on solutions. But if this is a meeting where he simply reiterates that he won't negotiate, this meeting will not be productive."

Testifying before the Senate Budget Committee Thursday morning, Treasury secretary Jacob Lew warned Congress that failing to act on the debt ceiling before Oct. 17 could lead to "irrevocable damage" to the nation's economy and financial markets.

Lew had a message for lawmakers who have suggested that it is possible to let the deadline lapse without serious consequences. "The United States should not be put in a position of making such perilous choices for our economy and our citizens. There is no way of knowing the irrevocable damage such an approach would have on our economy and financial markets," he said. Later, he added, "It is irresponsible and reckless to insist that we experience a forced default to learn how bad it is."