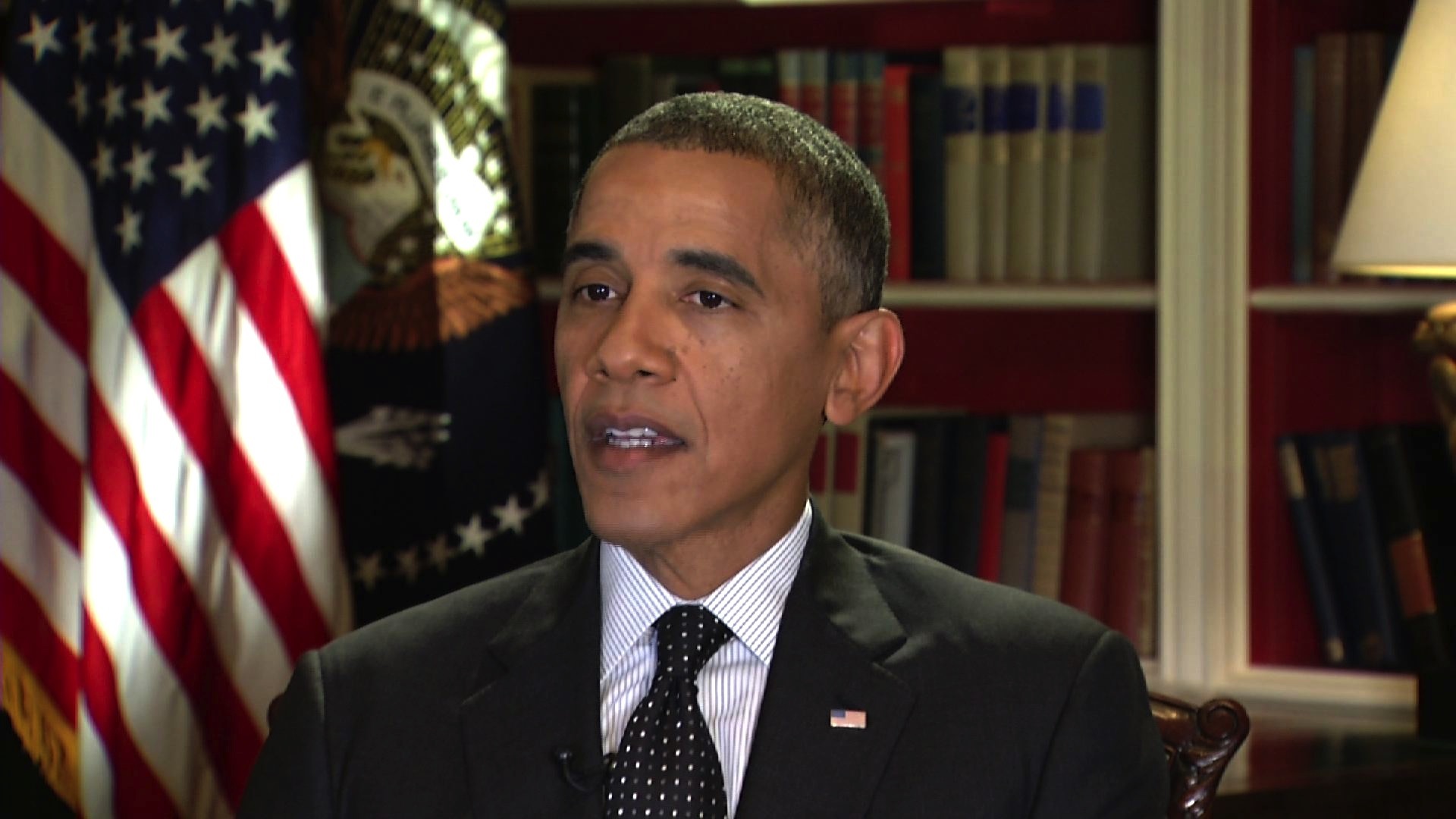 President Obama called the partial government shutdown "completely unnecessary" and once again insisted that Republicans pass a bill to fund the government before beginning negotiations on either a short-term spending bill or the debt ceiling.

"The reason we're where we are right now is because Speaker Boehner, the House Republicans, thought that they could get leverage in budget negotiations or defund the Affordable Care Act, Obamacare, by taking us to the brink," Mr. Obama told CBS affiliate WTVR Wednesday.

"In a normal negotiation you'd sit there and you'd say okay, this is what you want, this is what I want - nobody's going to get 100 percent of what they want," he said. "What Mr. Boehner's essentially said is, you know, unless I get what I want completely, then, I'm not going to reopen the government. Well, I don't understand, and I don't think most Americans understand why do you need to shut down the government in order to have a negotiation?"

The interview fell on the ninth day of the federal government shutdown. Congressional leaders have begun to talk again, but are still digging in their heels on their respective positions. A Gallup Poll out Wednesday shows that Republicans have hit a new low in their favorability ratings. They stand at 28 percent, a 10-point drop from September's 38 percent.

Democrats have also seen a drop since September, but not of the same magnitude. Their favorability is 43 percent, down four points from last month.

Wednesday afternoon, Mr. Obama is meeting with House Democrats to discuss the shutdown, the first meeting between the president and congressional leaders since the second day of the shutdown.

While there are no indications that both sides are ready to sit down and negotiate an end to the shutdown and raising the debt ceiling, the president's meetings with congressional leaders are the first since day two of the shutdown last Wednesday and will be closely watched for any possible thawing in the stalemate.

He is also slated to meet with congressional Republicans later this week, a move that has caused yet another round of bickering between the White House and the GOP. House Republicans announced that they would only be sending a small group of negotiators consisting of the elected leadership of the House GOP and a few committee chairmen to the meeting.

"Nine days into a government shutdown and a week away from breaching the debt ceiling, a meeting is only worthwhile if it is focused on finding a solution," Boehner spokesman Brendan Buck said by way of explanation. "It is our hope that this will be a constructive meeting and that the president finally recognizes Americans expect their leaders to be able to sit down and resolve their differences."

White House spokesman Jay Carney issued an indignant response not long afterward. "President Obama is disappointed that Speaker Boehner is preventing his members from coming to the White House," the statement said. "The President thought it was important to talk directly with the members who forced this economic crisis on the country about how the shutdown and a failure to pay the country's bills could devastate the economy."

Carney also reiterated that the only way a "real discussion" will happen is if the GOP first passes bills to fund the government and raise the debt ceiling without any conditions.

"Reps. Pelosi and Hoyer asked for the meeting, and as we've stated publicly, we're willing to meet with any Democratic leader who is willing to talk," said Boehner spokesman Michael Steel.

Right after the meeting, however, Boehner took to the House floor to double down on the Republican position that Obamacare be part of negotiations to fund the government and raise the debt ceiling.

"Our message in the House has been pretty clear. we want to reopen our government and provide fairness to all Americans under the president's health care law. You know the law had a big rollout last week, but its been called, and I'll quote, an inexcusable mess," Boehner said on the House floor, in reference to the widespread technical glitches on the websites people use to sign up for insurance. "How can we tax people for not buying a product form a website that doesn't work?..This is why we need to sit down and have a conversation about the big challenges that face our country."

Gov. Chris Christie, R-N.J., was a surprise visitor to Capitol Hill Wednesday and stopped in to meet with Senate Republican leaders. He insisted to reporters following his meeting that he wasn't there to discuss the shutdown - "I'm trying to be reelected as governor and my job is to work on the problems of New Jersey," he said, adding that he was there to "meet some of the new friends" temporary Sen. Jeff Chiesa, R-N.J., has made in his short time in D.C.

Christie, however, did offer that he doesn't "think it's ever good to keep the government closed when your job is to run the government."

Nine days into the federal government shutdown, with the debt ceiling just around the corner, Republicans continue to hammer President Obama to negotiate to resolve both problems.

Whether the strategy will shift blame away from the GOP and onto the Democrats remains to be seen. Right now, Republicans are bearing the brunt of the responsibility for the crisis: A new Associated Press-GfK survey released Wednesday shows that 62 percent of adults surveyed online mainly blame Republicans for the current shutdown. About half said Mr. Obama or congressional Democrats bear the responsibility. These numbers echo a Washington Post/ABC poll released Tuesday which showed 70 percent of Americans disapproving of how the GOP is handling the budget negotiations, compared to 61 percent for Democrats and 51 percent for Mr. Obama.

The president's poll numbers aren't exactly rosy, either. Fifty-three percent of those surveyed in the AP poll disapproved of his job performance; only 37 approved. But Congress takes the cake on public disappointment with a mere 5 percent approval rating.