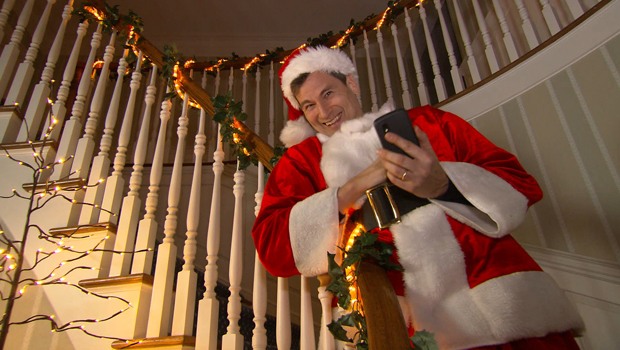 Time for some last-minute gift ideas from Techno Claus. Some think he bears a resemblance to our friend David Pogue of Yahoo Tech:


Techno Claus clambers out of the chimney, as he does every year.

Hello there! I'm Techno Claus, fresh from the sleigh
To help suggest gifts for the big jolly day.
Although if you haven't yet shopped on your spree,
Then why are you sitting there, watching TV?
Well, hey, let's get cracking. [Takes out his phone] Voila! This year's list.
Man, some of this stuff, even I can't resist.

This power strip here does a number of tricks.
For starters, it bends, so there's room for your bricks.
But here's where your brain is about to get blown:
Those two outlets there, you control with your phone!
I scare off the burglars by remote control
Or freak out my wife when she's back at the Pole!

​Jon Cryer tells all, and then some

I love these thinner laptops! So lightweight and all,
A shame that their storage is laughably small.
But snap this here USB nub right in place,
You've got up to 64 more gigs of space!
I like that it's fast, plus it's so small and it's clean,
You leave it for good! Leave it in your machine.

Wikipedia says I'm 500 years old.
That's a lot of time flying a sleigh in the cold!
The thing is, my eyesight has slowly declined.
I have glasses, but sometimes I leave 'em behind!
But now I have extras I keep, just in case ( "Just in case," get it?)
They don't have the . . . things . . . but they stay on my face!

He struggles mightily to put up a tree--it tilts, he tries to screw the little threads into the trunk, etc.

A Christmas tree's nice, and I hate to complain,
But why must installing it be such a pain?
They sent up a man to the moon there to land,
Can't somebody make a good Christmas tree stand?

He opens the door and flings the stand out the window.

Well, this one is it. It's a foot pump, you see?
The jaws and the cable clamp onto the tree.
One person can do it (I just showed you how).
A battleship couldn't dislodge the thing now.

Those laser-type printers print very crisp ink,
But they're huge and expensive (or so people think!)
Not this one. It's cheap! And it's tiny, as shown.
It prints from computers, or even your phone!

Is your coffee table a nightmare like mine?
Then man, you'll think this thing is nearly divine!
You tell it what TV equipment you own,
It programs itself, and you just use your phone!

He taps Watch Tivo on the phone -- his gear turns on by itself.

One box to control all the stuff on your shelves.
I wish I could likewise control all my elves!

Look up in the sky . . . it's a bird! It's a plane!
Well, no, it's a drone! And this one is insane.
Incredibly stable and easy to fly,
It takes high-def videos high from the sky.
Now 500 bucks isn't peanuts, I guess,
But compared with its rivals, it costs a lot less.

He packs up, heads for the fireplace.

There's a lot of good stuff out in Tech-Land this year.
But now it is time for departure, I fear.
I don't really love it, this flying through snow . . .
But hey -- I got 3 billion chimneys to go!