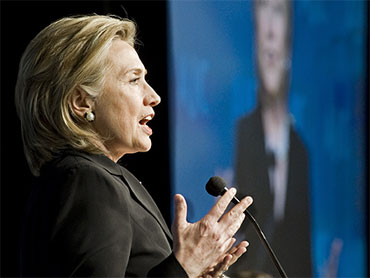 According to President Obama and Attorney General Eric Holder, the Justice Department is currently in the process of deciding whether or not to file suit over Arizona's controversial immigration law, which Mr. Obama has called "misguided" and potentially discriminatory.

According to Secretary of State Hillary Clinton, however, the decision has already been made.

"President Obama has spoken out against the law because he thinks that the federal government should be determining immigration policy," she said in an interview with an Ecuadorean television station flagged by The Right Scoop. "And the Justice Department, under his direction, will be bringing a lawsuit against the act."

The Arizona law, which would go into effect in July, requires immigrants in the state to carry documents verifying their immigration status and requires police officers to question a person about his or her immigration status during a "lawful stop" if there is "reasonable suspicion" that person may be in the country illegally.

Holder has indicated that he believes "the law is an unfortunate one that will be subject to potential abuse" and said that the Justice Department is "considering a court challenge."

It is not clear whether Clinton was just making a prediction or whether she was getting ahead of a planned announcement by the administration. The Justice Department said today it is continuing to review the law.