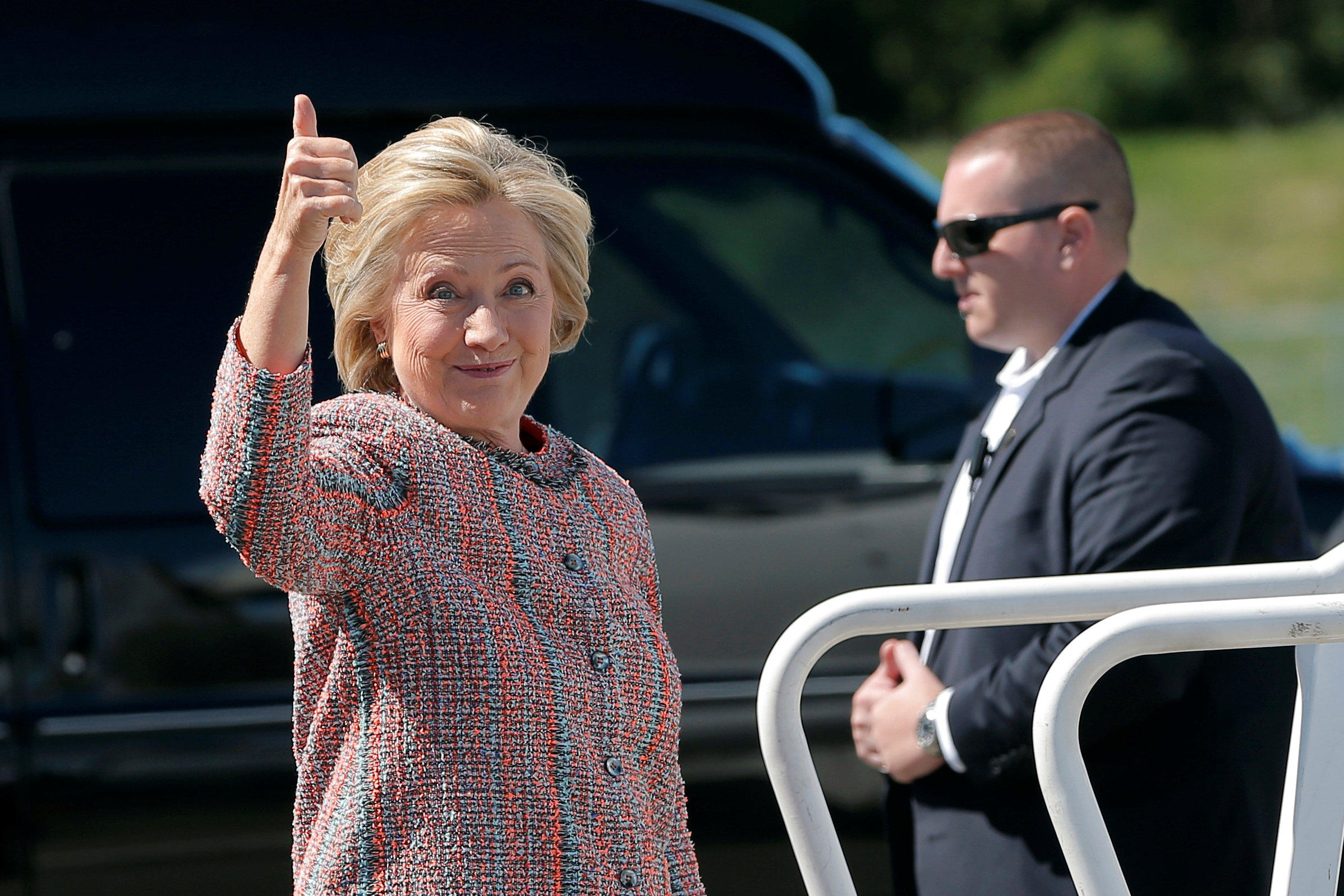 WHITE PLAINS, N.Y. — Hillary Clinton returned to the campaign trail Thursday, smiling and chatting with reporters as her plane flew to North Carolina. The Democratic presidential candidate appeared energetic and in high spirits after the bout of pneumonia that sidelined her.

“I have to say, it’s great to be back on the campaign trail,” she told a cheering rally in Greensboro. “As you may know, I recently had a cough that turned out to be pneumonia. I tried to power through it, but even I had to admit that a few days of rest would do me good.”

“I’m not great at taking it easy even under ordinary circumstances, but with just two months to go until election day, sitting at home was pretty much the last place I wanted to be,” she said.

She is expected to take more extensive questions later in the day.

Clinton left a 9/11 memorial service in New York on Sunday, stumbling and being supported by others as she entered her car. Her campaign said later that she had been diagnosed with mild pneumonia on Friday. That episode has brought new attention to the candidates’ health and raised questions about her openness and Donald Trump’s on the subject.

Republican Trump was talking taxes and the economy on Thursday, promising that as president he would boost national economic growth by at least 3.5 percent — well above current projections — and create 25 million new jobs over a decade.

The economy could do much better than at present, he said, without current “excessive regulation” and an overly complex tax system.

The heart of his plan is a revised tax code, which includes a pledge that no business should pay more than 15 percent of its income in taxes, a major drop from the current 35 percent highest corporate tax rate. He also is proposing a simplified individuals’ tax code, reducing the current seven tax brackets, to three: 12 percent, 25 percent and 33 percent of income after deductions.

In his speech to the New York Economic Club, he said he would cut the number of regulations imposed by the government, including some of those that currently are intended to protect the food Americans eat and the air they breathe

Clinton, meanwhile, seemed reinvigorated and pleased to be back campaigning.

“I’m really glad that I did finally follow my doctor’s orders and take some days to rest instead of just trying to keep powering through, which I think is a common experience for people,” she told the “Tom Joyner Morning Show” in an interview broadcast Thursday morning.

She and Trump both released letters from their doctors this week with additional details about their health, including their cholesterol levels, blood pressure and current medications. Both candidates’ physicians declared them fit to serve as president.

In releasing a letter from Trump’s doctor Thursday, his team appeared to take a swipe at Clinton’s brief absence from the campaign trail.

“We are pleased to disclose all of the test results which show that Mr. Trump is in excellent health, and has the stamina to endure — uninterrupted — the rigors of a punishing and unprecedented presidential campaign and, more importantly, the singularly demanding job of president of the United States,” the campaign said in statement.

Trump first provided a summary of a recent physical to Dr. Mehmet Oz while taping an episode of Oz’s TV show. He said on the show that he gets exercise during the campaign by delivering speeches at rallies, calling them “a lot of work” and requiring “a lot of motion.”

Until now, the main source of information about Trump’s health has been a widely mocked letter from his longtime physician declaring he would be the healthiest president in history. Clinton released information from her doctor more than a year ago and provided updated information Wednesday following her pneumonia diagnosis.

Clinton was campaigning Thursday in Greensboro, North Carolina, and speaking to a Hispanic group in Washington.