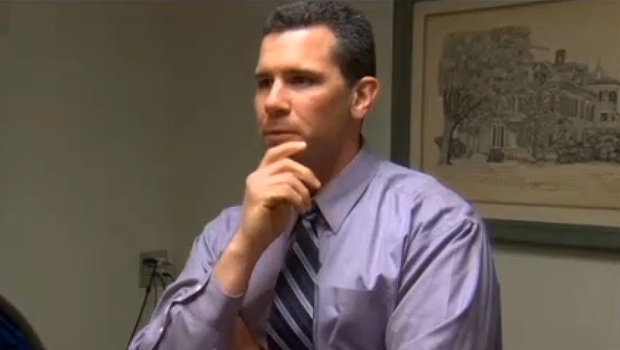 WINCHENDON, Mass. - The principal of a Massachusetts high school is furious over hate-filled messages on a Twitter account.

Murdock High School Principal Joshua Romano tells CBS Boston he could have chosen his words more carefully, but he is standing by what he said.

"I'm a lot closer to teddy bear than grizzly bear," Romano said. But the grizzly bear in Romano growled when he learned some of his students were using anonymous Twitter accounts to cyber bully classmates about personal looks, hygiene and dating habits.

"I've been doing this for 17 years," Romano said. "I've seen the damage that bullying can do to children."

The Iraq War veteran fired off an angry school e-mail calling the offenders "pathetic cowards" and saying "I have more respect for the insurgents I fought in Iraq than I do for the people behind this Twitter account."

"It's so easy to turn a school negative, and so hard to build up a positive," Romano said.

He now wishes his e-mail wasn't as harsh, but some parents in Winchedon, a central Massachusetts town near the New Hampshire border, defended his hard line.

"I thought it was great," said Florence LaFrennie. "If maybe more people stuck up maybe less kids would get bullied and less bad things would happen."

Students felt the same way. "It just shows that he's a good person, and he actually cares about us and our school," student Chelsea Sanderson said.

Perhaps what bugs Principal Romano the most is that so many people told him the nasty tweets weren't a big deal. "They almost feel like it's part of life today and it doesn't have to be," he said.

The Twitter accounts were quickly closed and the tweets were deleted. Romano hopes going grizzly stirred things up enough to out the culprits. "What you kind of hope for is a buzz, the kids get talking," he says.

Police say at this point the Twitter posts do not add up to criminal harassment, but Romano is looking to hand out suspensions.

Romano says he'd rather be criticized for an over-the-top response than a weak one. He says part of what motivates him is the memory of Phoebe Prince, who killed herself in nearby South Hadley, Massachusetts, five years ago after classmates bullied her.