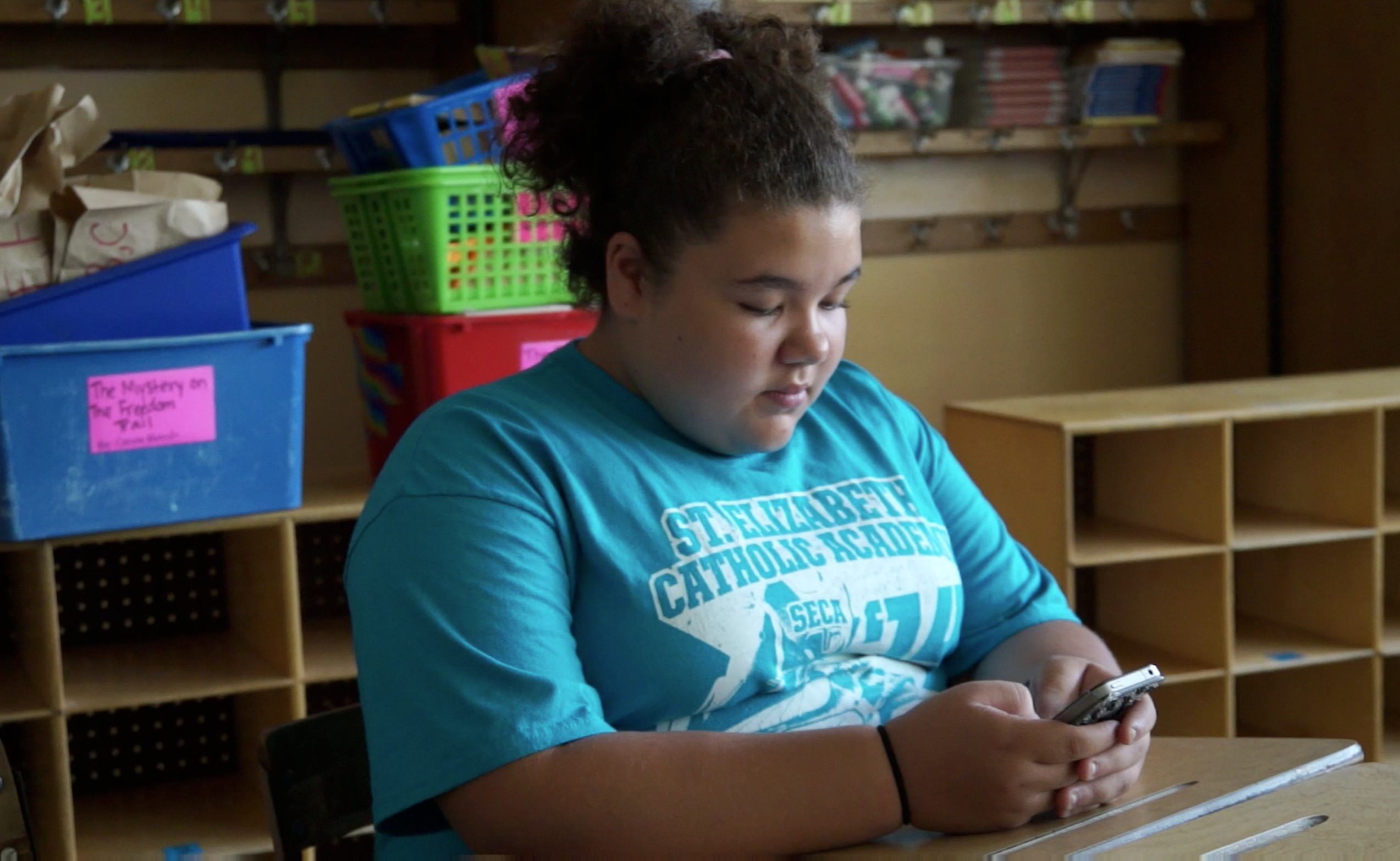 For 13-year-old Samantha Milan, the worst part about being bullied was the fact that it happened in front of a huge audience. "This kid started threatening me, and then it went online to Instagram," she said. "The caption said something like, 'Look who's hungry.' It made me feel like I just wanted to die."

A growing number of teenagers like Samantha say they've been bullied online. Almost 15 percent of students in grades 9 to 12 have experienced cyber-bullying, according to the Centers for Disease Control and Prevention's 2013 Youth Risk Behavior Surveillance System. And those kids are more than twice as likely to consider suicide, according to a recent study in the Journal of the American Medical Association.

"It feels horrible because everyone can see it," Samantha said. "And everything that goes online, never goes away. Even if you destroy the computer, it's still there."

Cyber-bullying can involve nasty text messages or offensive pictures posted on social media, and there's a whole range of technology available to fight it.

The social network We Heart It is designed to prevent an experience like Samantha's. It allows users to share photos but no one can post comments on them. It's very popular with teens, who make up most of its 25 million users.

Identity protection program Metlife Defender offers a service that monitors a child's online accounts for abusive content, then sends alerts to their parents.

And just last week, the U.S. Department of Education unveiled a new app called KnowBullying to help parents spot warning signs and talk to their kids about the problem.

Another recently-released cellphone app called StopIt takes a different approach. It enables children to take a screenshot of a harassing post, picture or text message, and anonymously send it to a trusted adult. This is the app's most popular feature among teenagers, who often want to help, but are worried about retaliation.

The StopIt app helped put an end to offensive tweets about a 14-year-old boy from Kenilworth, New Jersey, who has Asperger's syndrome. "It was a child who finally said 'Enough is enough,' and I'm so grateful to whoever that child was," said the boy's mother, Tina Lynaugh. "I'm glad that the children feel comfortable that they can actually say StopIt, and not feel intimidated themselves or feel that they'll be attacked next because they came forward."

David Brearley High School in Kenilworth is one of 14 schools that introduced the StopIt app to their students a few months ago. Principal Brian Luciani said he quickly saw a decrease in reports of harassment. "There's a little more accountability," Luciani told CBS News. "If you're going to bully someone, even if you're just quote unquote 'just joking around'... there will be consequences to those actions."

Kenilworth Superintendent Scott Taylor said many of his students felt empowered by the app. "Knowing that a teenager has something right there in the palm of his or her hands that could stop a bullying incident in its tracks makes them feel comfortable," he said. "It makes them feel confident that something can get done if they an incident of bullying or are a target of bullying."

These are high-tech solutions for a high-tech problem. But they may not be as effective if children don't feel comfortable telling their parents or friends that they're being targeted.

That's exactly what happened to one of Samantha Milan's classmates, Samantha Taska, who was also bullied. "I felt like I had no one to turn to," Taska said." But you shouldn't isolate yourself from people, because who are you gonna tell? Tell your best friend, tell your teacher, tell your aunt, tell your uncle, tell someone."

Some children, however, may feel that their parents just won't understand -- and in some ways they may be right. If parents are out of touch with the technology their kids are using, they may not realize how it can be abused. Samuel Lam was bullied on Facebook in middle school, but didn't think his parents could help. "My parents had absolutely no idea what was going on at the time," Lam recalled. "Facebook, they hadn't heard of it at the time, they didn't know what Twitter was, any of the social networks."

His fears were echoed by Kenilworth parent Tina Lynaugh, who said she struggles to keep up with the gamut of social media options available to kids. "Your children are going on technology that you don't know about. As a parent it's more frightening because I did not grow up with technology."

And it's not just Twitter, Facebook and Instagram. Messaging apps Secret and Snapchat are both hugely popular with teens, and have come under fire for their potential for abuse.

Snapchat, whose messages and photos self-destruct as soon as they've been viewed, is frequently used for sexting and other inappropriate posts. And while teens may think the disappearing messages can't come back to haunt them, the company recently settled charges with the Federal Trade Commission for, among other things, not informing users that messages could be saved without their knowledge.

Some critics have argued that Secret, where users can post anonymously, enables cyber-bullying, but the company told CBS News that it has systems in place to counter that, including "automated efforts to flag and automatically block" inappropriate content. In addition, "every user can flag, block and report any post or comment," which is then sent to a real human for review and possible removal.

So what can parents and children do when faced with a cyber-bully? Experts offer these tips:

- Take a screenshot or save a text message.

- Block or unfriend the bully.

- Tell a trusted adult, like a family member or teacher.

Samantha Milan and her classmates are starting an after-school club called "Fear to Fierce" to help other bullied teens. "If you're out there right now," she said, addressing the bully who taunted her about her weight, "I want you to know that I'm fierce, and you can't bring me down."