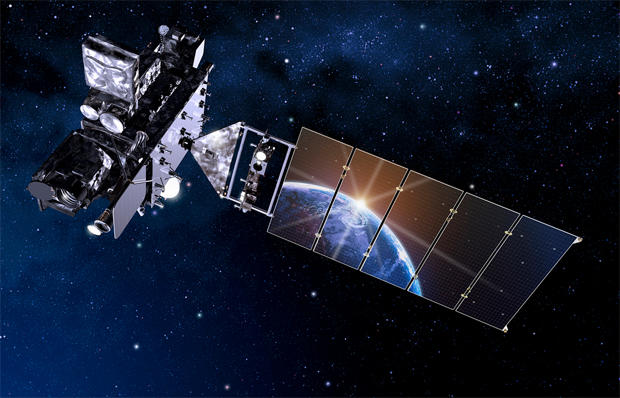 The first in a new generation of high-power GOES weather satellites, the centerpieces of an $11 billion upgrade to the nation’s forecasting and weather observation infrastructure, is poised for launch Saturday from the Cape Canaveral Air Force Station.

Equipped with six state-of-the-art instruments, including a powerful camera that will provide near real-time high-resolution imagery, the National Oceanic and Atmospheric Administration expects the new satellites to revolutionize forecasting over the next 20 years, saving lives and and helping to protect property.

“NOAA’s GOES-R satellite, with its advanced technologies, will be a game changer for weather forecasting and climate science for many years to come,” said Stephen Volz, NOAA associate administrator for satellite and information services.

“For decades now, NOAA satellites have been the backbone of our increasingly accurate and timely weather and climate forecasts. However, this new four-satellite GOES series is really a quantum leap above any satellite NOAA has ever flown. Without a doubt, GOES-R will revolutionize weather forecasting as we know it.”

“It’s just a phenomenal capability,” he told CBS News. “When we first showed it to some of the forecasters, one of them gave me a great quote, he goes ‘this is like going from black-and-white television to HDTV.’ Just the crispness of what we’re seeing, and to get it so fast that they can see what’s developing. So they’re just tremendously excited about what it’s going to do for us.”

Mounted atop a United Launch Alliance Atlas 5 rocket, the newest Geostationary Operational Environmental Satellite -- GOES-R -- is scheduled for launch Saturday from complex 41 at the Cape Canaveral Air Force Station at 5:42 p.m. EST (GMT-5), the opening of a one-hour window. Forecasters are predicting a 90 percent chance of favorable weather.

Equipped with a Russian-built RD-180 first stage engine and four strap-on solid-fuel boosters, the Atlas 5 will climb out of the dense lower atmosphere on 1.2 million pounds of thrust.

A hydrogen-fueled Aerojet Rocketdyne RL10C-1 engine powering the rocket’s Centaur second stage then will fire three times to put the satellite in its planned preliminary orbit, with a high point of 21,926 miles and a low point of 5,038 miles. The spacecraft will be released to fly on its own three hours and 32 minutes after liftoff.

An on-board rocket motor then will fire five times over nine days to raise the low point of the orbit and put the spacecraft into a circular orbit 22,300 miles above the equator. At that altitude, GOES-R will take 24 hours to complete one trip around the globe and thus appear stationary in the sky as the Earth turns, allowing it to continuously image the entire western hemisphere.

The main engine needed to boost the satellite to its operational altitude has experienced problems aboard two other satellites. But Mandt said engineers are confident they understand the issue and that GOES-R’s thruster will work normally.

Just in case, software is on board to detect signs of an impending problem before it can cause trouble. And if all else fails, the satellite can reach its intended orbit using smaller maneuvering thrusters. In that case, 18 thruster firings would be required and it would take twice as long to reach the planned altitude. But, Mandt said, it would get there.

“We put some checks in the software monitoring various telemetry points so that if the same thing happened, the precursors to their failure we are monitoring, so we would shut it off before (ignition),” he said. “But we’re confident we’re not going to have that same problem. We think we have a good engine.”

The new satellites will be phased in over several years to take over from three older-generation GOES spacecraft currently in orbit. One monitors the eastern half of the hemisphere, one monitors the west and one is stationed in between to serve as an operational spare.

Built by Lockheed Martin Space Systems, GOES-R features an advanced camera, a sensitive magnetometer, an ultraviolet X-ray sensor to measure how solar radiation affects the upper atmosphere, an ultraviolet imager to constantly monitor the sun and sensors to measure charged particles from the sun that can affect communications and navigation.

The satellite also is equipped with a lightning mapper, a first for a GOES spacecraft, that will take photos of lightning fields in the western hemisphere about 200 times a second to give meteorologists a better sense of “where the severe weather is starting to really brew,” Mandt said.

But to millions familiar with the global views seen on nightly television newscasts, the Advanced Baseline Imager, or ABI, is the instrument that will provide the HDTV-quality data NOAA promises to deliver.

“NOAA’s GOES-R will scan the sky five times faster than the current GOES system with four times the spatial resolution and with three times the spectral bands,” said Joe Pica, Joe Pica, director of the National Weather Service Office of Observations. “This means we’ll have better quality data at high resolution far more often than we do today.”

The result is a much more detailed view of developing weather patterns, “and when we see an evolving weather system, we’ll be able to zoom in and use that high spatial resolution to take pictures in 16 different spectral channels every 30 seconds,” Pica said.

“This spectral imagery, combined with our doppler radar data, for example, will improve our understanding of whether a storm is growing or decaying. It’ll help us track severe storms, including tornadoes, forecast wildfire movement, track plumes from volcanic eruptions and tell whether a hurricane is intensifying.”

Getting high-resolution imagery and lightning maps in near realtime, he added, will help forecasters “better see where those rain bands are actually impacting us, giving them more confidence predicting where the flash flooding will occur.”

“We can see waves in the clouds, which are related to turbulence, that, if you’re flying on airplane, you might encounter,” said Steve Goodman, GOES-R program scientist with NOAA. “So we’ll have early indication of areas to avoid, which we couldn’t see before with our lower resolution, it was just smeared out.”

GOES-R will become GOES-16 once in orbit. GOES-S is scheduled for launch atop an Atlas 5 in early 2018 with GOES-T going up in the 2020 timeframe and GOES-U following suit around 2024. The new satellites are intended to provide uninterrupted service through 2036.

“Every five minutes, you’re going to see a picture of the continental United States,” he said. “And then every 30 seconds, you’ll be able to get an image of, let’s say, a thunderstorm developing or a hurricane developing. It’s just going to be amazing.”