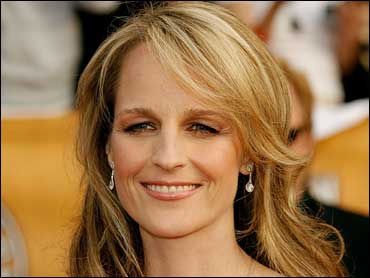 "Then She Found Me," the filmmaking debut for the Academy Award-winning actress, will play at September's Toronto International Film Festival.

The movie stars Hunt as a New York City schoolteacher whose commonplace life suddenly grows complicated after her husband (Matthew Broderick) leaves her, the mother (Bette Midler) she never knew comes into her life, and she begins a relationship with a student's father (Colin Firth).

Hunt, a best-actress Oscar winner for "As Good as It Gets," directed the film from a novel by Elinor Lipman.

Four other films were announced Thursday for the lineup of the Toronto festival, which runs Sept. 6-15:

John Sayles' "Honeydripper," starring Danny Glover as a Southern juke-joint owner in the era when the blues were giving way to rock 'n' roll.

Playwright David Auburn's directing debut, "The Girl in the Park," with Sigourney Weaver as a woman who takes in a troubled girl (Kate Bosworth) years after her own young daughter vanished.

Craig Gillespie's "Lars and the Real Girl," starring Ryan Gosling as a social misfit who becomes enamored with a life-size doll.

Actor Richard Roxburgh's directing debut, "Romulus, My Father," with Eric Bana and Franka Potente in a family drama based on Raimond Gaita's memoir of his difficult upbringing.