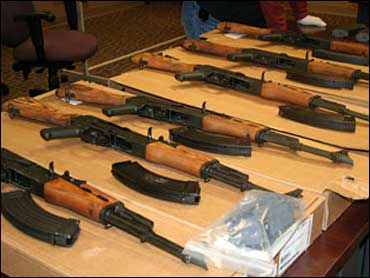 Governor Ed Rendell (D-Penn.) and the executive vice president of the National Rifle Association Wayne LaPierre engaged in a heated debate over the assault weapons ban on this morning's Face The Nation.

Yet the two almost - almost - came to a shared agreement on gun violence.

Rendell said that he "absolutely" agrees that the assault weapons ban that expired in 2004 should be reinstated.

Rendell pointed to last week's shooting in Pittsburgh in which three police officers responding to a domestic disturbance were killed by a man armed with an assault weapon - a weapon apparently purchased legally. He said more officers may have been killed if the gunman's weapon had not jammed.

Rendell said he agrees with the president's decision to hold off on the issue while focusing on the economy - "This is not the time to bring this issue up" - but he assured host Harry Smith that virtually every police organization supports banning assault weapons.

"You know, we all pay homage to beliefs," Rendell said. "May 15th is the day to remember the policemen who have died in the line of duty. We all give homage to the police, and yet we don't listen to them on this basic issue.

"Since the assault ban has been lifted, Harry, 40 American police officers have either been killed or seriously wounded with assault weapons."

The NRA's LaPierre, however, said that the assault weapons ban is "a totally phony issue. And that's why Congress doesn't want to deal with it again. He instead blamed a "revolving door criminal justice system" that lets violent criminals back on the street, and a failure to fully enforce already-existing gun laws.

"Congress found it out. That's why they let it expire, and lies that are found out don't get reenacted." 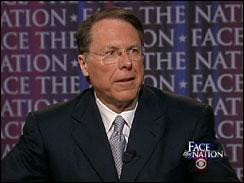 (CBS)
LaPierre (left) also charged that the assault weapons ban reauthorization (which died in the last Congress) would have extended the ban to all guns, saying that "there is no functional difference at all between any of these so-called assault weapons the media talks about.

"Assault weapons are machine guns; they're fully automatic, they spray fire, they're rapid fire. That's what our soldiers use. These guns we're talking about, that the governor wants to ban, are functionally no different than any other gun. The performance characteristics are exactly the same. There's no difference."

"That is unbelievably untrue," Rendell said. "The assault weapons that are used that are sold in sporting goods stores now because the ban has been lifted, they put out a tremendously high amount of fire. And remember, the ban not only banned these assault weapons - it banned large capacity ammunition clips.

"Now I'd like Wayne to explain to the American people why anybody should have the right to have an ammunition clip that has more than 10 bullets in it at one time? What use is that made for, Wayne? Who uses that?"

"Governor, you know there is absolutely no difference between two 10-round magazines and three of another," LaPierre replied.

"There's a big difference," Rendell shot back, saying a shooter would have to reload, indicating police would have a better chance to respond.

"See, and that's the excuse all the time," Rendell said.

"And it's the truth, and you know it!" LaPierre continued.

Rendell offered that all constitutional amendments are recognized to have limits, such as the ability to shout "Fire" in a crowded theater.

While skirting a question by Smith as to whether the NRA's rank-and-file believed the president is interested in overturning the Second Amendment, LaPierre disputed recent claims that the U.S. has been the source of 90% of the weapons being used by Mexican drug cartels.

"You know what they're trying to do right now? They're trying to piggyback this whole phony issue … on the back of the tragedy in Mexico." He challenged President Obama and the U.S. media to prove that 90% of the cartel's guns are smuggled into Mexico from the North.

"It may not be 90 percent, that certainly has been put in question," said Smith "But there's certainly plenty of these guns that are coming across the border."

LaPierre instead said that border agents themselves say they do not need more gun laws, merely better enforcement of current laws. 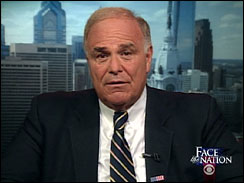 (CBS)
"First of all, number one, I agree with Wayne that we need to enforce existing laws better," Rendell (left) said. "But in Pennsylvania, in over a decade, we've increased our prison population on our state prisons by over 15,000 people. We are enforcing the laws; we're putting bad and difficult and dangerous people who use firearms to commit crimes in jail. When I was district attorney, we enacted the first mandatory minimum sentence for people who use guns to commit crimes. We just enacted, in Pennsylvania, a 20-year mandatory minimum sentence for anybody who fires a gun at a police officer.

"Let's go back to the original point. What blessed use is there for one of these assault weapons? What American needs an assault weapon to protect themselves?"

"It's not an assault weapon," Lapierre said. "It's no different than any other."

"It's an assault weapon!"

"You know what happened in Philadelphia, Governor? When the cameras went away, you went away," LaPierre said. "But I'll tell you what we ought to do this morning. Let's agree on this: Every American city, let's put Project Exile, every time a violent felon, drug dealer, gang member touches a gun, let's prosecute."

"I agree with that."

"Harry, let's make a deal right here. I agree with Wayne. I agree with Wayne!" Rendell laughed. "But, also, Wayne, let's you and I agree that the Congress can pass a law saying that individuals can only purchase one handgun a month. That's 12 a year. Who in their god's name needs more than 12 handguns a year?"

"You know, there you go again," LaPierre said. "Like criminals are standing around going, 'Only one, only one.' Don't you get it? They're criminals. They violate all your laws."

"Criminals get their guns from people who buy guns legally. Straw purchasing is the number one problem for crimes," Rendell said.

"And it's illegal, and let's enforce the law," LaPierre said.