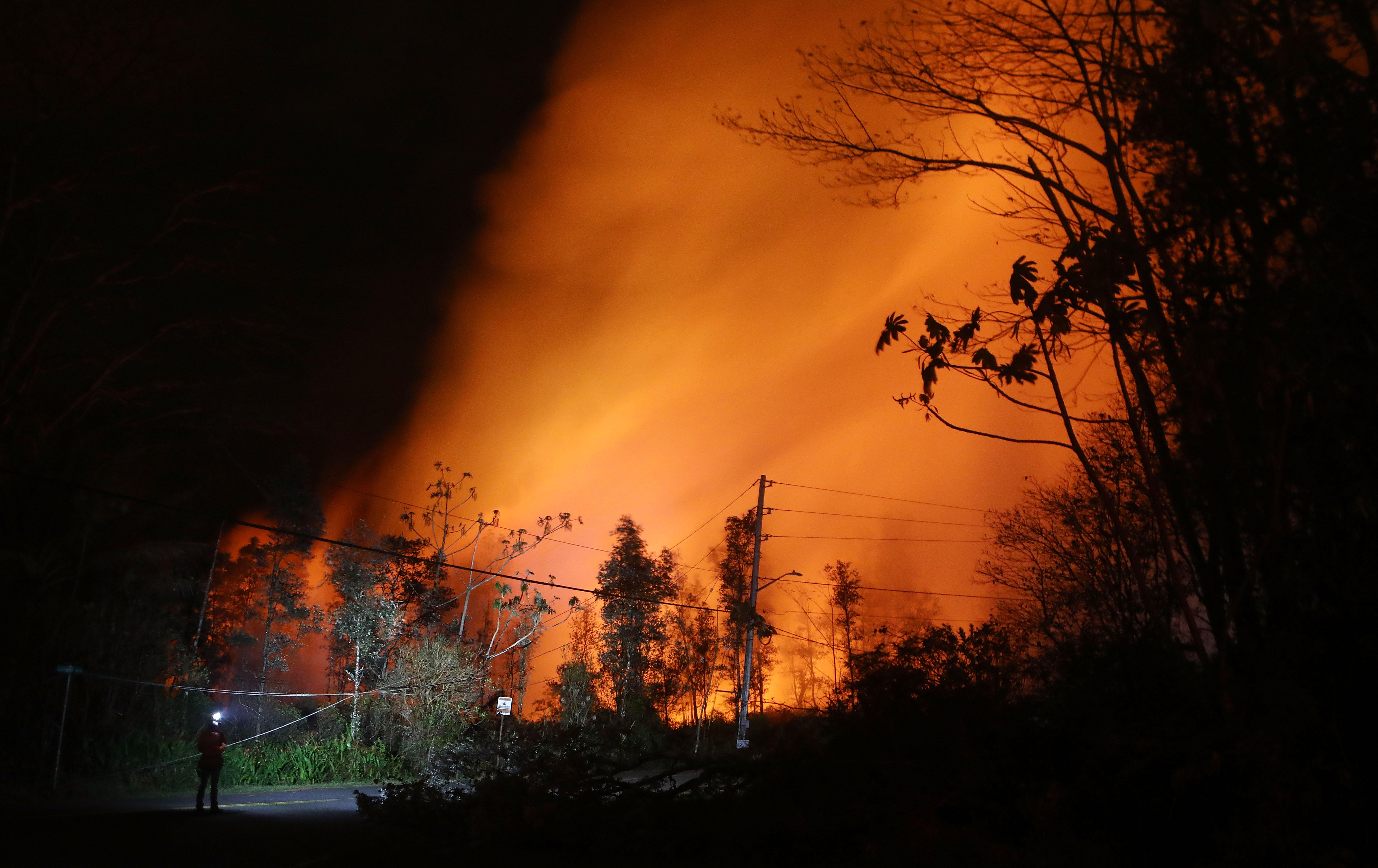 PUNA, Hawaii -- A new fissure cracked open Thursday on the Island of Hawai'i and others "reactivated" with new flows of oozing black lava, as noxious gas and ash became biggest immediate problem for residents around the Kilauea volcano. Hawaii County Civil Defense officials confirmed late Thursday afternoon local time that the 21st fissure had opened in the Leilani Estates, and they urged residents there to "take necessary precautions" and "continue to be on the alert for volcanic fumes" of sulfur dioxide.

The noxious gas, normally emitted at dangerous levels only from the volcano's Halemaumau Crater, was seeping at a greater rate from the fissures in Leilani Estates, a residential area of about four square miles in the Big Island's Puna district. The threat was significant enough, reports CBS News correspondent David Begnaud, that some first responders were pulled back from their positions on Thursday to safer areas.

Hawaii News Now reported that the concentration of gases was higher Thursday at least in part because light winds weren't pushing them offshore.

Residents with respiratory problems had already been warned to stay indoors in the area on Thursday following an early morning ash cloud eruption at the Halemaumau Crater. The eruption at about 4:30 a.m. local time failed to even wake up many residents as it was a non-explosive event, but a thin layer of ash did fall on areas west of the crater.

It was not the big blast scientists have been warning could come from the crater any time, and that threat -- of an explosion that could produce flying boulders the size of cows -- remained unchanged late Thursday.

The National Weather Service issued an ash advisory and then extended it through early evening, and county officials distributed ash masks to area residents. Several schools closed because of the risk of elevated levels of sulfur dioxide, a volcanic gas.

Anyone with respiratory difficulties, such as asthma or emphysema, should limit exposure to the ash, Green said.

"People need to stay inside until the winds shift and the ash has settled," he said.

Extended exposure to sulfur dioxide can increase risk of bronchitis and upper respiratory infections in the long run, according to findings of a study Green worked on with other experts published in 2010 in the Journal of Toxicology and Environmental Health.

The Federal Aviation Administration extended a restriction on aircraft from entering the airspace up to 30,000 feet above Kilauea's summit. The earlier limit was up to 10,000 feet. The prohibition applies to a 5-mile radius around the crater.

Thursday's eruption did not affect the Big Island's two largest airports in Hilo and in Kailua-Kona.

The crater spewing ash sits within Hawaii Volcanoes National Park, which has been closed since May 11 as a safety precaution over risks of a violent eruption.

Scientists warned May 9 that a drop in the lava lake at the summit might create conditions for a large explosion. Geologists predicted such a blast would mostly release trapped steam from flash-heated groundwater.

Kilauea, one of the world's most active volcanoes, has been erupting continuously since 1983. It's among the five volcanoes that form the Big Island, and it's the only one actively erupting. An eruption in 1924 killed one person and sent rocks, ash and dust into the air for 17 days.

Scientists cannot say why the eruption is happening now, given that Kilauea has been active for 35 years.

"There's so many variables. It's complicated, like a bad Facebook relationship status," said volcanologist Janine Krippner of Concord University in West Virginia. "Something will eventually change, like it has over and over and over again."