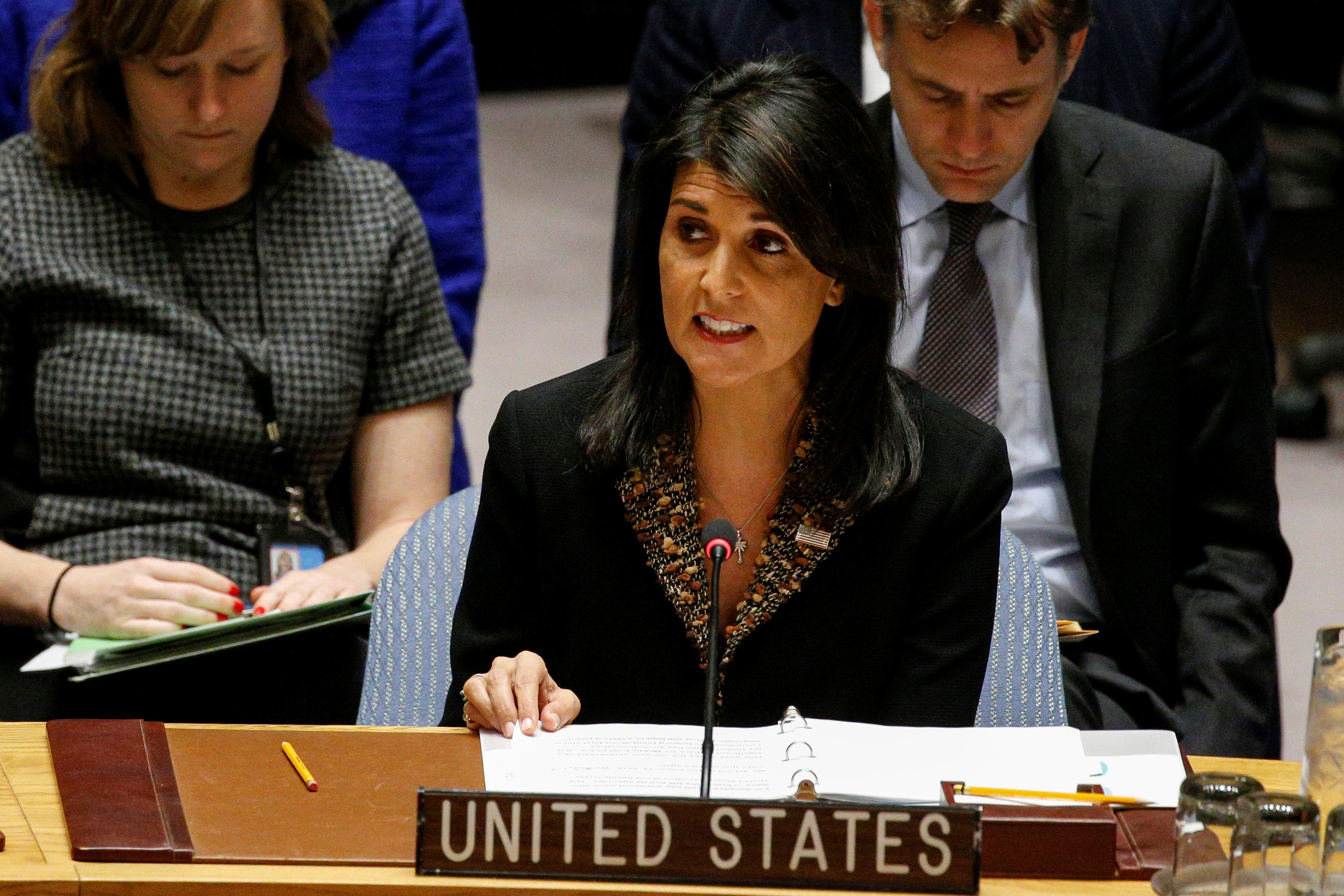 UNITED NATIONS -- U.S. ambassador to the United Nations Nikki Haley said Tuesday that evidence is mounting that Iran is supplying arms to Yemen's Houthi rebels, in violation of the resolution that put the Iran nuclear deal into international law. Haley's strong words came on the same day that Saudi Arabia said its air defense system intercepted a ballistic missile fired by the rebel group toward the their capital city, Riyadh.

"This is the Secretary-General's fourth report on the Iranian regime's lack of full compliance with Resolution 2231," Haley said, referring to the U.N. resolution that codified the nuclear deal. "And it is the most damning report yet. This report makes the case that Iran is illegally transferring weapons."

In the latest -- the fourth -- report on this issue, the Secretary-General, Antonio Guterres, warns that Iran may be defying a U.N. call to halt ballistic missile development even as it complies with the nuclear deal with six world powers and that the United Nations is investigating Iran's possible transfer of ballistic missiles to Houthi Shiite rebels in Yemen.

Haley told the Council, "This report makes the case that Iran is illegally transferring weapons."

Guterres said that President Trump's Oct. 13 decision not to certify the agreement under U.S. law created "considerable uncertainty" about its future."

U.S. commitment to the nuclear pact may be waivering, U.S. diplomats say, after Haley introduced what she sees as "irrefutable evidence" that Iran violated U.N. rules by providing Houthi rebels in Yemen with arms.

That evidence was introduced by Haley at a press conference at the Joint Base Anacostia-Bolling in Washington, D.C., late last week. She presented what she described as recovered pieces of a missile fired by Houthi militants from Yemen into Saudi Arabia in a November attack, pointing out the missile bears "Iranian missile fingerprints."

On Tuesday, Haley told the Council that "the Secretary-General's report refers to debris from missiles fired by Houthi militants from Yemen into Saudi Arabia in July and November of this year.. The inventory at the warehouse in Washington removes any shred of doubt that the missiles are from Iran."

She then gave chapter and verse on the evidence recovered: Iranian-manufactured anti-tank guided missiles, an unmanned aerial vehicle known as a kamikaze drone and material from a SHARK-33 explosive boat.

"All of these weapons, recovered from attacks and planned attacks on a G20 country, were made by Iranian weapons industries tied to the Iranian Revolutionary Guard Corps," Haley said.

British ambassador Matthew Rycroft, who said his country supports the nuclear agreement, pointed to Iran's violations, saying "we are deeply concerned by reported transfers of Iranian ballistic missile parts and related technology to the Houthis in Yemen ... such transfers would be a violation of Resolution 2231 which prohibits the transfer to and from Iran of ballistic missile technology."

At the Council meeting Tuesday, the U.N. Undersecretary-General for Political Affairs Jeffrey Feltman told the Council that "the Secretary-General has again not received any report regarding the supply, sale or transfer to Iran of nuclear-related items undertaken contrary to the provisions of the resolution."

The U.N. top diplomat did offer his version of options: "Based on the violations of the Secretary-General's report, there are a few options that we can use to put pressure on Iran to adjust their behavior: The Security Council could strengthen the provisions of Resolution 2231; We could adopt a new resolution that makes clear that Iran is prohibited from all activities related to ballistic missiles."

"The Secretariat observed that one of the UAV - which Saudi authorities ascertain was similar to that of the Iranian-made Ababil-II - is similar to other drones reportedly seized in Yemen brought to our attention by the United Arab Emirates," he said. He called for the opportunity to examine these other unmanned aerial vehicles, "in order to independently ascertain their origin."

Haley concluded with a call to action: "We have an opportunity to confront the Iranian regime for its actions that are clearly in violation of Security Council resolutions. The international community must demonstrate that we are committed to ensuring accountability for the full spectrum of Iran's malign behavior."