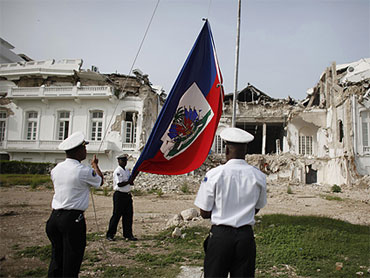 The sun was beating down on the rocky cactus plain when men with machetes came for Menmen Villase, nine months pregnant, shoved her onto her bulging stomach and sliced up the plastic tarp that sheltered her and her four children.

The family was one of thousands of earthquake homeless who had come to this Manhattan-sized stretch of disused sugarcane land between the sea and barren mountains north of Port-au-Prince, seeking refuge from overflowing camps in the city.

But this real estate is earmarked for building a new Haiti. Villase had walked into one of the fights over land, rooted in Haiti's history of slavery, occupation and upheaval, that have served to slow recovery to a near-standstill in the six months since the earthquake leveled much of the capital and killed as many as 300,000 people.

The government, already weak before the magnitude-7 quake and still hobbled by its aftermath, is trying to build anew in places like Corail-Cesselesse, a nearly empty swath of land that begins about nine miles north of the capital. But the effort is paralyzed by disorganization, bitter rivalries and private deals being struck behind its back.

Multiple families claim title to almost every scrap of real estate. Already one reconstruction official has been forced to step down for steering a public project to his company's private land at Corail-Cesselesse. Wealthy landowners vow the "new Haiti" will become yet another vast slum unless the government rebuilds on their terms.

Caught in the middle are the homeless, looking to grab a patch of ground from the thugs hired to keep them away. Even facing machetes, Villase had to be dragged from the tarp that was home for her and four children.

"I didn't want them to take the tent away," she recalled. "They said, 'We don't care. We can rip it up while you're inside."'

In the moments after the disaster all Port-au-Prince began pouring into twilit streets. Homes, still collapsing, had in a moment become death traps. Camps rose on public and private spaces, squares, parks and golf courses.

Bodies were everywhere, laid out under sheets, cardboard or nothing. Dump trucks and front-loaders cleared most in the following weeks. Others were burned. Some are still being found.

The bodies have been cleared, but not the estimated 26 million cubic yards of rubble. Mounds of it make most of the capital impassable. Even with 300 trucks working daily, only two percent has been cleared.

The number of people in relief camps has nearly doubled to 1.6 million, while the amount of transitional housing built is minuscule.

Most of the $3.1 billion pledged for humanitarian aid has paid for field hospitals, plastic tarps, bandages, and food, plus salaries, transportation and upkeep of relief workers. About $1.3 billion went through U.S. relief groups.

By May, enough aid had been raised internationally to give each displaced family a check for $37,000. So why are so many still going hungry and living under flimsy shelters?

CBS News investigative correspondent Sharyl Attkisson reported that most of the $14.9 billion that's been donated will be used on long term projects to rebuild Haiti.

Hundreds of millions have yet to be spent, with agencies such as the American Red Cross saying they want to avoid dumping money into half-baked projects.

Aid workers say the money already spent helped prevent epidemics, floods and political violence, while distributing food and other essentials. Food markets are back to normal, and the foreign doctors and equipment that flowed in have left medical care - while deeply flawed - better than it was before the quake.

Most Haitians didn't have running water and electricity before the quake, and still don't.

Police and U.N. peacekeepers are back on patrol. Crime is more prevalent since the quake, with attacks in camps terrorizing thousands, especially women and girls. However, violence is nowhere near the levels faced when the U.N. troops arrived six years ago.

But besides meeting people's most basic needs, little else has happened.

President Rene Preval works beside the caved-in hulk of the national palace. Homes and stores lie in heaps.

More than 665,700 plastic tarps and 97,000 tents were handed out, but most are now falling apart. Officials planned to put up 125,000 transitional shelters - not nearly enough for everyone. Only 3,722 have been built. Nearly four times as many still await assembly, shelter officials say.

When materials finally get through customs, there's no land to put them on.

Reconstruction is still mostly a concept.

That committee is set to oversee the first installments of the $9.9 billion pledged for international reconstruction - money separate than the total spent on humanitarian aid. But less than 2 percent of it has been delivered. The rest is mired in bureaucracy and politics of more than 60 countries and organizations that pledged to help.

Everyone bemoans the lack of progress, but Bellerive says past experience dictates caution, lest reconstruction simply replicate the pre-quake slums.

In "the last 30 years there was no planning with any action ... no code," he said. "What we didn't want to do is launch any demogogic, visible action (just to) prove we are working."

A few miles from Haiti's biggest ports and safely past its northernmost slums, Corail-Cesselesse is a blank canvas. On this vast stretch abutting one of the Caribbean's largest cities, in a country more densely populated than Japan, will rise garment factories, homes, stores and restaurants in one of the country's first planned communities, the planners say.

Just before a March visit by former U.S. Presidents Clinton and George W. Bush, Preval said the government was taking over more than 18,500 acres of that land to accommodate thousands of families at risk from the coming floods and hurricanes.

A few hundred acres were picked out for the city's first, long-awaited relocation camp. The U.N. and U.S. military construction teams flattened and graded the land for a camp of deluxe "ShelterBox" tents. About 5,000 residents of the Petionville Club golf-course camp, run by actor Sean Penn, were bused in.

Thousands of squatters who could not get access to the "good" camp followed, staking their tarps and poles on its outskirts.

Aid groups did not know it, but this was a first salvo in a long-desired plan to develop this broad expanse.

Other big plans for Port-au-Prince are on the drawing board: Rebuild the downtown; spend $100 million to restore the destroyed government center of the Champ de Mars; bring back the cruise ships; hold a design competition for new ministerial buildings, to be "a museum of 21st Century architecture" in the words of government planner Leslie Voltaire.

But if you really want to see the future, Voltaire said, look north.

In Corail-Cesselesse, houses would be built for 300,000 people - transitional shelters at first, but each with a permanent facade and capable of expanding to six rooms. There will be jobs and services that most of the rest of the city now lacks.

This northern expansion will help transform Port-au-Prince into a "Zen city," engineered to be balanced and serene, he said. It will be the key industrial city of the Caribbean.

"The idea is to pick up all that imagination and wealth and put it in that mountain," Voltaire said with a smile. "It's minutes to the port. It's going to be a hit."

But with a barely functioning government, Corail-Cesselesse may be built according to backroom deals, not planners' blueprints.

The government had appointed Gerard-Emile "Aby" Brun, president of Nabatec Development, a consortium owned by some of Haiti's most powerful families, to be in charge of relocating the squatter camps in Port-au-Prince.

For that first relocation camp for 5,000 people, with clinics, food on premises and some electricity, he chose a piece of Corail-Cesselesse land owned by Nabatec, confirmed Voltaire and Bellerive, the prime minister. The company now stands first in line to gain part of $7 million the government will spend compensating landowners.

That's just a small part of the potential payoff.

Nabatec is also a lead negotiator with South Korean garment firms to build factories that Haitian officials say will likely go into Corail-Cesselesse, and the camp he set up is a potential source of workers for those factories, which can take advantage of generous U.S. import laws for Haitian-assembled textiles.

Foreign aid workers complained that the camp was too far from the city and went up without basic amenities. "We weren't very happy about the choice of site and how it was selected, and how it was isolated," said Oxfam spokeswoman Julie Schindall.

Bellerive said he told Brun to quit his government position because of the apparent conflict of interest. But the deal Brun negotiated for his company stands.

Rumors of the coming factories and jobs have already spread in the camp. Jonathas Metelus, a 31-year-old father of two, says he'll take a job there if offered.

Meanwhile, the squatters continue to pour into Corail-Cesselesse.

You don't see them until you come up the road. First just one. Then a hundred. Then fields of them. Sweating through their secondhand T-shirts, clutching wooden poles, plastic sheets and tools, 10,000 or more have set up tents.

Maxo Jean-Charles, 26, lost both his children, 4-year-old Claudia and 3-year-old Marco, in the quake. He lost his home in the densely packed Delmas 32 district of Port-au-Prince. He's desperate for a place to start over.

His cousins and uncles pound a stake into the ground while a woman rests in the dirt. Each family is claiming their square of land, they explain.

"This is where they're sending everyone to live. That's why we're building our tent here," he said.

Who "sent" them? No one can say. But the landowners suspect the government is populating the land with squatters, so it can be taken for the "new Haiti" at a minimum price - or for nothing.

Land ownership has been a sensitive issue since Haiti's 1804 slave revolt, when it was wrested from French planters and distributed among the people, only to fall back under the ownership of a few powerful families - the "grands-hommes" (big men) in Haitian parlance.

The land registry hasn't been updated for decades, and many of the records that did exist were lost in the earthquake.

"My fair price is a negotiation between the market price and the price the owner declared to the income tax," Voltaire said. "And it's always very low."

Bellerive said landowners will be compensated, but that housing the homeless takes priority.

"If we take the time to resolve it one by one, the people are going to stay on the streets," he said.

He could have a strong ally - Clinton, who has said he'll plunge into the bargaining himself, if necessary.

"I'm not above doing that," Clinton told The Associated Press on a a recent visit. "I've been known to make a deal or two in my life."

The landowners say if they're not compensated, the "new Haiti" in Corail-Cesselesse will end up making the violent slums of pre-quake Port-au-Prince look tame. They say if anyone builds there without their consent, they will sue to get the land back. Landowner Jean-Claude Theodore calls the squatters invaders who are attacking private property.

Voltaire has his own response to threats of lawsuits or worse - a government backed by U.N. peacekeepers, the international community and his blueprint.

Every squatter seems to have had an encounter with gangsters they believe are sent by landowners.

Sadrak Abane, 60, said they beat him with a rifle. He refused to go.

"Any time we pick a spot to build a place there's always the 'grands-hommes' claiming the land is theirs," said Wisner Jerome, 37.

But they believe they have government behind them.

It didn't work that way for Menmen Villase. Stripped of tarp and land, she and the children fled to a crumbling concrete cabin in a remote corner of Corail.

Farther from the aid available in the deluxe camp, with no easy way to get to markets, she struggles to find food.

A few days after being driven from her makeshift home, she lay alone on the cabin floor and gave birth to her fifth child.