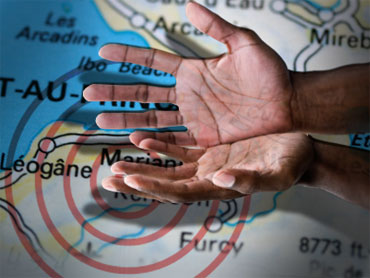 Four months after the earthquake, more than 1.5 million Haitians remain homeless. Many live amid utter devastation.

Yet enough aid has been raised to give each displaced family a check for $37,000. So why are so many still going hungry and living under flimsy shelters?

CBS News investigative correspondent Sharyl Attkisson reports the little known truth is, most of the $14.9 billion that's been donated will be used on long term projects to rebuild Haiti.

Mark Weisbrot, a former economic consultant to Haiti, said, "The organizations that already have money, should be spending this right now. This is emergency relief.."

To find out what has been spent so far, CBS News looked at five major non-profits: CARE, Catholic Relief Services,the Red Cross,the Clinton-Bush Haiti Fundand the separate raised $444 million and spent about 25 percent ($111 million) of it, including $55 million for "emergency relief," such as food and kitchen items, and $42.9 million for shelter including tarps, tents and blankets.

And at Catholic Relief Services: of $165 million committed to Haiti, it spent no more than 8 percent ($12.2 million), including $2.5 million on food $1.28 million on emergency shelter.

The charities argue they've already helped millions of people and would get criticized if they spent too much up front instead of addressing the long term.

"At the same time we move quickly, we move also prudently with spending the funds so that we ensure that the investment is made prudently," said Gary Philoctete, CARE Assistant Country Directory Haiti.

As head of the American Red Cross, Gail McGovern is well-aware of prior scandals where the Red Cross was accused of collecting money for one cause but spending it on another.

"Can you tell the public today that every dime raised by the American Red Cross for Haiti will be spent on Haiti?" Attkisson asked.

"Minus the nine cents overhead, 91 cents on the dollar will be going to Haiti," McGovern said. "I give you my word and my commitment. I'm banking my integrity, my personal sense of integrity on that statement."

It's too soon to get the most detailed accounting. Each non-profit has its own policing mechanisms, like independent audits and advisory committees. They each say they can show with great precision where nearly every penny is going, but that will take time.

Bill Canny leads Emergency Operations for Catholic Relief Services - which has spent the least proportionally of the charities we looked at.

With so many billions of dollars in the mix, one thing's clear. There's plenty to spend money on and no shortage of questions about how and when it will be used.