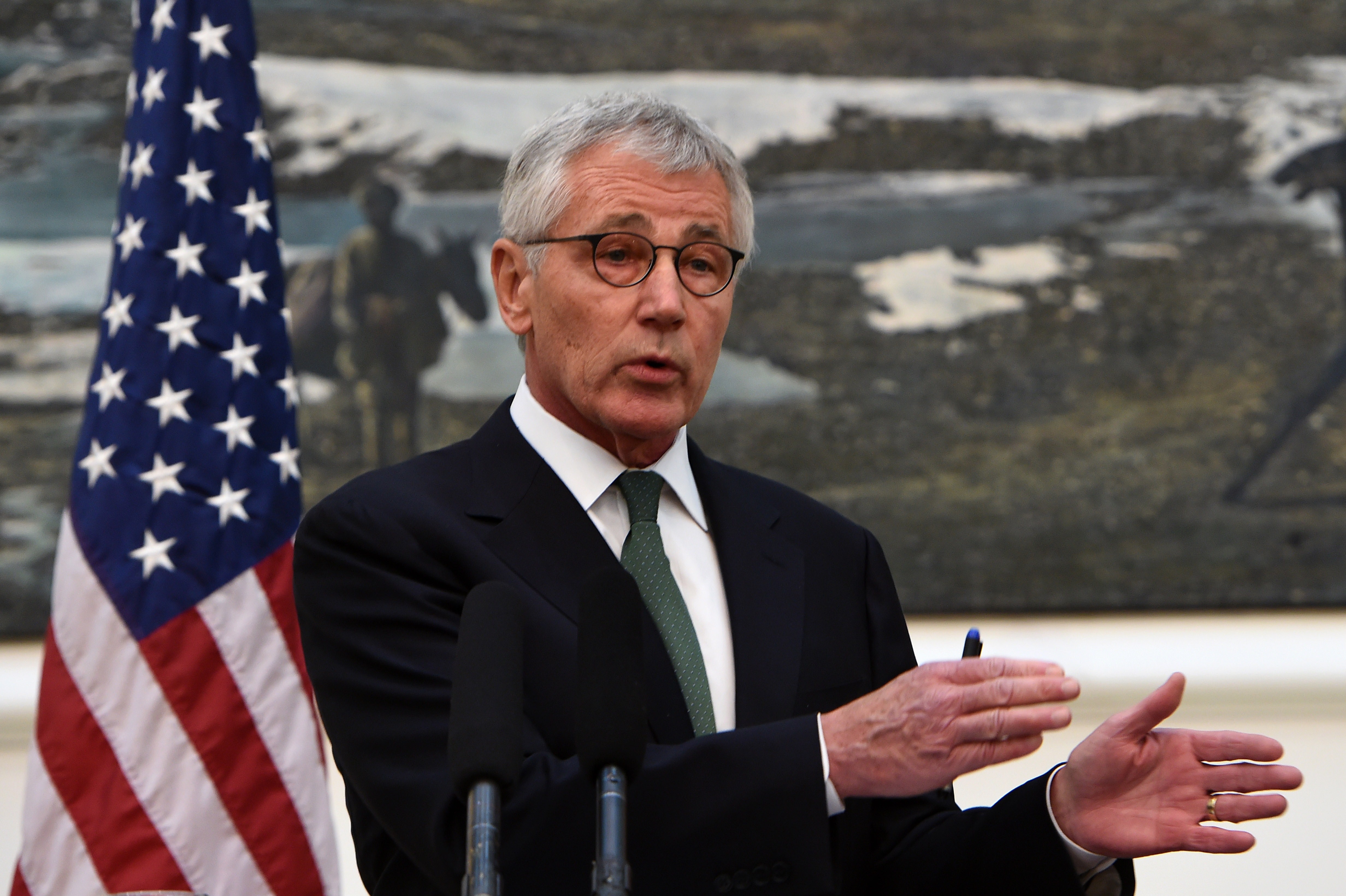 KABUL, Afghanistan -- The United States will keep about 1,000 more troops in Afghanistan than planned early next year to fill a temporary NATO troop gap in the new mission to train and advise Afghan security forces, U.S. Defense Secretary Chuck Hagel said Saturday on his final visit to this war-weary country as Pentagon chief.

At a news conference with President Ashraf Ghani, Hagel said the original plan to cut U.S. troop levels to 9,800 by the end of 2014 had been abandoned, but not because of a recent surge in Taliban attacks.

Hagel said the U.S. will keep up to 10,800 troops for the first few months of 2015 and then restart the drawdown, which is scheduled to reach 5,500 troops by the end of next year.

The U.S. decided to keep additional forces in the country temporarily because planned troop commitments by U.S. allies for a NATO train-and-assist mission starting in January have been slow to materialize.

Gen. John Campbell, the top U.S. commander in Afghanistan, told reporters in an interview later Saturday that he is confident NATO members will furnish the necessary number of troops for the new training mission, which begins Jan. 1. It's just going to take a few extra weeks or months to get them in Afghanistan, he said.

Campbell, who took over on Aug. 26 and has served two previous tours in Afghanistan, spoke glowingly of the new government led by Ghani and Chief Executive Abdullah Abdullah.

"It's like night and day difference dealing with this government," compared with the previous government led by Hamid Karzai, who was often publicly critical of U.S. military efforts against the Taliban insurgency, Campbell said.

Campbell said the morale and confidence of Afghan forces have been boosted by Ghani's enthusiastic embrace of their efforts and sacrifices.

While flying to Kabul from Washington, Hagel was receiving almost continuous updates on the U.S. commando raid in Yemen to rescue an American hostage, photojournalist Luke Somers.

The mission was executed while Hagel was aboard a military aircraft with top-secret communications systems. He approved the plan for President Barack Obama's consideration before leaving Washington, according to a defense official who spoke on condition of anonymity to discuss internal deliberations.

At his news conference, Hagel said Obama agreed to allow Campbell the extra 1,000 troops "for a few months" only.

"But the president's authorization will not change our troops' missions, or the long-term timeline for our drawdown," Hagel said.

Hagel said the U.S. also will keep pursuing a "limited" counterterrorism mission in Afghanistan beyond 2014.

"We have not forgotten what brought America's armed forces here over a decade ago," he said. "We are committed to preventing al-Qaida from using Afghanistan as a safe haven to threaten the United States, our allies and partners, and the Afghan people. And we will take appropriate measures against Taliban members who directly threaten U.S. and coalition forces in Afghanistan, or provide direct support to al-Qaida."

On his final visit to Afghanistan as U.S. defense secretary, Hagel said with striking optimism that he believes Afghans will successfully put down a surge in Taliban attacks in the capital and stabilize the nation.

Hagel arrived in Kabul one day after Obama said he would nominate one of Hagel's former deputies, Ashton Carter, to succeed Hagel, who resigned under pressure Nov. 24.

In an interview with reporters traveling with him, Hagel was in a reflective mood about America's longest war. The former senator recalled arriving in Kabul in January 2002 as a member of a congressional delegation when security was so dicey that the lawmakers arrived under cover of darkness and left before dawn.

The Taliban, which had ruled Afghanistan since 1996, were forced from power in late 2001 just weeks after a U.S.-led invasion prompted by the Sept. 11 attacks. But they recovered gradually after the U.S. shifted its military focus to Iraq in 2003, and by 2008 the U.S. was conceding that the war in Afghanistan was stalemated.

Taliban fail to quash hope in Afghanistan's women and girls