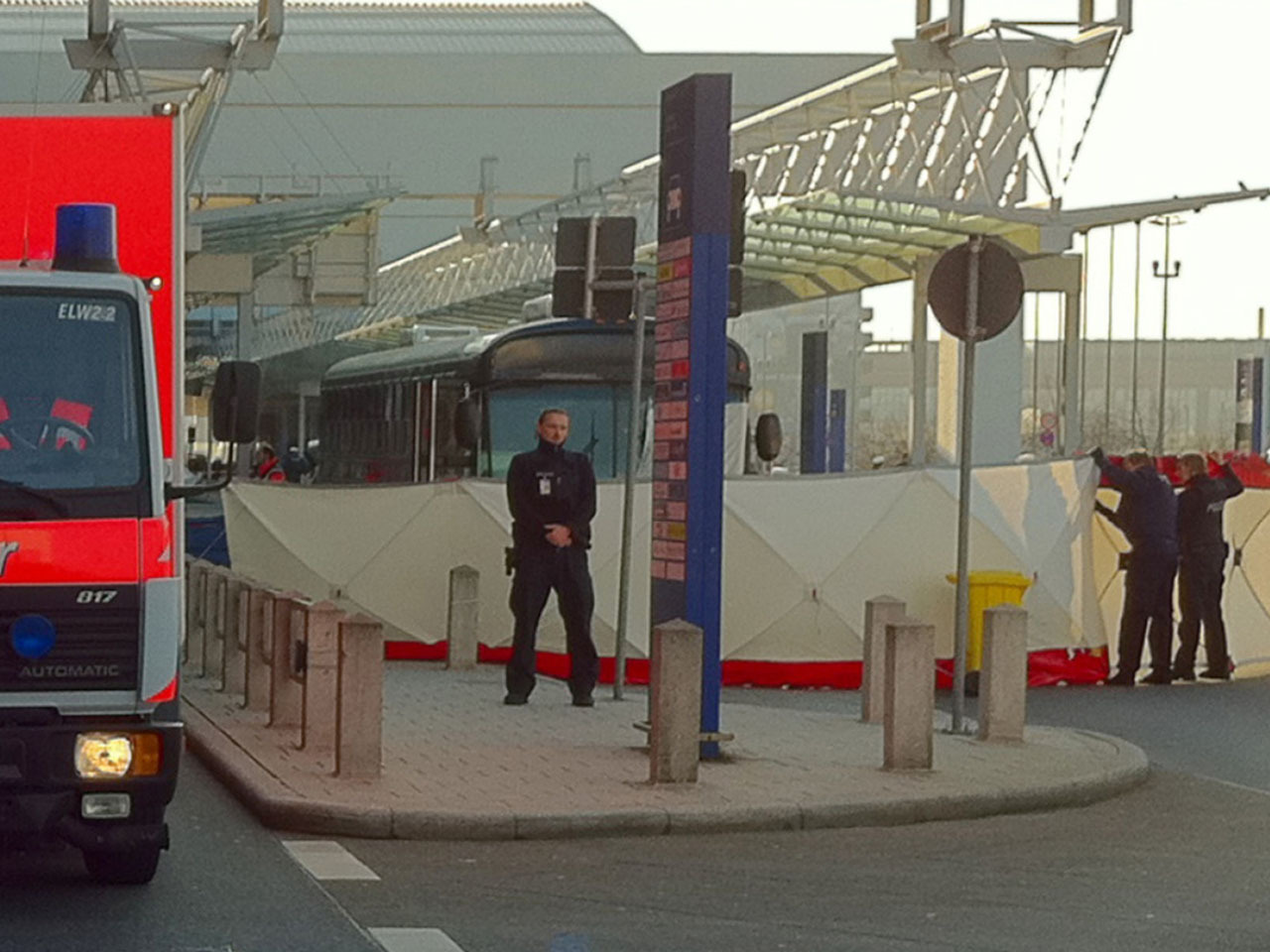 FRANKFURT, Germany - Two U.S. airmen are dead and two others are wounded after the attack this morning on a shuttle bus outside of the Frankfurt, Germany airport terminal.

Kosovo's interior minister told The Associated Press that German police have identified the gunman as a Kosovo citizen.

The suspect's uncle said he is a German-born devout Muslim who works at the airport.

In an interview with The Associated Press in Kosovo, 70-year-old Rexhep Uka said the suspected gunman -- Arid Uka -- was born and raised in Germany after his parents moved there from Kosovo about 40 years ago.

The uncle says Arid is a pious Muslim whose grandfather was a religious leader at a mosque in the village of Zhabar, near Mitrovica, Kosovo.

Murat Uka, who identified himself as the alleged shooter's father, says the only thing he knew about his son was that he hadn't turned up at work on Wednesday.

The Frankfurt airport refused to comment on whether the suspect worked there.

CBS News correspondent Bob Orr reports that a single gunman boarded the bus and opened fire. He then fled from the bus into a terminal where he was tackled and detained by German authorities. He remains in German custody.

Investigators are looking into witness reports that the gunman shouted, "God is great!", in Arabic (Allahu Akbar) as he began firing, reports Orr.

U.S. officials say they are still investigating to determine if the German gunman has any ties to extremist or terrorist groups. So, far no connection has been confirmed and the motive remains unclear.

At the shooting scene, the gunman apparently acted alone, reports Orr. There was no evidence of accomplices. Investigators are working to find out if he had any help or if anyone else had knowledge of his plan.

It is unclear if the gunman deliberately targeted the soldiers or if he knew they were Americans.

"We will spare no effort in learning how this outrageous act took place and to ensure all perpetrators are brought to justice," Mr. Obama said during a White House briefing Wednesday. "This is a stark reminder of the sacrifices men and women in uniform are making and the dangers that they face."

A spokesman for Air Force at Lakenheath airfield confirmed all four airmen were from the military base in eastern England.

Lakenheath is home to the 48th Fighter Wing, the United States' only F-15 fighter wing. Its website says the base employs some 4,500 active-duty military members, as well as 2,000 British and U.S. civilians.

There were 13 airmen on the bus, members of an Air Force security team on their way to Afghanistan, reports CBS News correspondent David Martin.

Kosovo Interior Minister Bajram Rexhepi said in an interview that Uka is a Kosovo citizen from the northern town of Mitrovica.

"This is a devastating and a tragic event," Rexhepi said. "We are trying to find out was this something that was organized or what was the nature of the attack."

Chancellor Angela Merkel said Germany will do "everything possible" in its investigation of the shooting. Merkel told reporters in Berlin that she condemned the "terrible incident."

The U.S. has drastically reduced its forces in Germany over the last decade, but still has some 50,000 troops stationed here. It operates several major facilities in the Frankfurt region, including the Ramstein Air Base often used as a logistical hub for operations in Afghanistan or Iraq.

The German news agency DAPD quoted Hesse's state interior minister, who had rushed to the scene of the shooting, as saying there were no indications of a terrorist attack.

Still, a member of the U.S. House Homeland Security Committee, Rep. Patrick Meehan, said in Washington that it looked like a terrorist attack. The chairman of the subcommittee that focuses on terrorism and intelligence added he did not have all the facts about the shooting yet and was still being briefed.

At the airport, taxi cab driver Salimi Seraidon said he was sitting at a stand about 200 yards away when the attack took place and said it was over quickly as police rushed onto the scene.

"We just heard the shots," he said.

Kosovo remained part of Serbia amid the collapse of former Yugoslavia in the early 1990s, but a struggle for independence by ethnic Albanians there eventually led to the Kosovo war in 1998. The bloodshed was halted only in 1999 when NATO stepped in and bombed Serbia, followed by the deployment of peacekeepers.

Kosovo was initially run by a U.N. administration, but it unilaterally declared its independence from Serbia in 2008 and it is now recognized by many states, among them the U.S. and most EU nations.

The NATO-led Kosovo Force (KFOR) still has some 8,700 troops there provided by 32 nations, NATO says. The U.S. currently provides some 800 soldiers, the third-largest contingent behind Germany and Italy, according to KFOR's website.

The American forces in Germany have been targeted in attacks in the past, including a 1986 bombing at a disco in then-West Berlin that was known to be frequented by U.S. servicemen. Two soldiers and one civilian were killed, and 230 others injured in that attack, which a Berlin court in 2001 ruled was organized by the Libyan secret service and aided by the Libyan Embassy in then-communist East Berlin.

The leftist terrorist Red Army Faction was also responsible for a string of attacks on Americans in the 1970s and 1980s before the group was disbanded in 1998.

More recently, German police thwarted a plot in 2007 to attack U.S. facilities by members of the extremist Islamic Jihad Union. Four men had planning to attack American soldiers and citizens at facilities including the U.S. Air Force's Ramstein Air Base in Germany but were caught before they could carry out the plot.