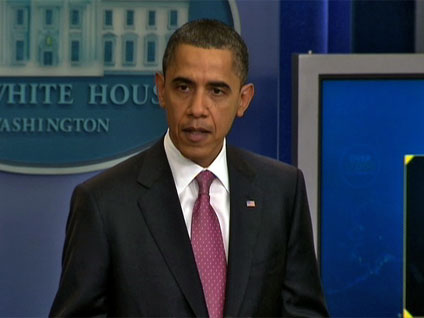 President Obama made a brief surprise appearance in the White House briefing room Wednesday to comment on the attack on American airmen on a bus outside the Frankfurt, Germany airport that left two dead.

The president said he was "saddened and outraged" by the attack and said Americans "are united in expressing our gratitude for the service of those who were lost."

He said the United States will "spare no effort in learning how this outrageous act took place and in working with Germany authorities to ensure that all of the perpetrators are brought to justices." He also called the attack "a stark reminder" of the sacrifices made by those in uniform and the dangers they face.

Mr. Obama added that he and his wife have the victims' families and friends in their prayers and extended condolences on behalf of the American people.

The president did not take questions following his brief remarks. He vowed to do so on Thursday during a joint appearance with Mexican President Felipe Calderon.