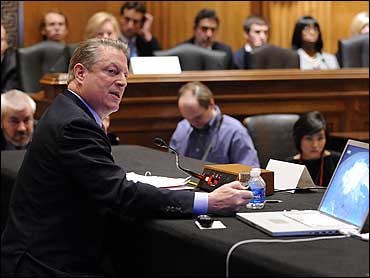 Former Vice President Al Gore urged lawmakers Wednesday not to let the economic crisis get in the way of addressing global warming.

The House is expected to pass the package Wednesday, although the wide bipartisan support Mr. Obama has hoped for remains in doubt.

But Gore also pressed for "decisive action" on a bill to cap heat-trapping gases, saying that it is needed for the U.S. to take a leading role in negotiations on a new international climate treaty later this year.

The Bush administration pulled out of the last treaty, the 1997 Kyoto Protocol, because of the lack of participation by developing countries. Negotiations on a new agreement are scheduled for December in Copenhagen, Denmark.

It was the first time Gore appeared before Congress since March 2007. Since then, the recession has deepened and the U.S. has waged two wars in Iraq and Afghanistan. A Democratic-controlled Congress and Democratic President have raised hopes for passage of a climate change bill.

Gore - whose book on global warming, "An Inconvenient Truth," became an Oscar-winning documentary - said the recession and wars should not cause another delay.

"We must face up to this urgent and unprecedented threat to the existence of our civilization at a time when our country must simultaneously solve two other worsening crises," Gore told the panel.

"The road to Copenhagen is now very clear. It starts with the passage of President Barack Obama's stimulus bill in its entirety. And then, secondly, we need to put a price on carbon by passing cap and trade legislation," Gore said Tuesday in an interview with The Associated Press. "In other words, this crisis is an opportunity."

Gore's appearance comes amid signs that the Democratic-controlled Congress and Obama administration plan to act quickly on climate change - domestically and internationally. It comes days after Mr. Obama signed orders that will boost the fuel efficiency of the nation's cars and trucks and could allow states to limit emissions of greenhouse gases from exhaust pipes.

Secretary of State Hillary Rodham Clinton also named a special climate envoy this week to lead U.S. negotiations on a new international treaty. She picked Todd Stern, a former White House assistant who was the chief U.S. negotiator at the Kyoto talks.